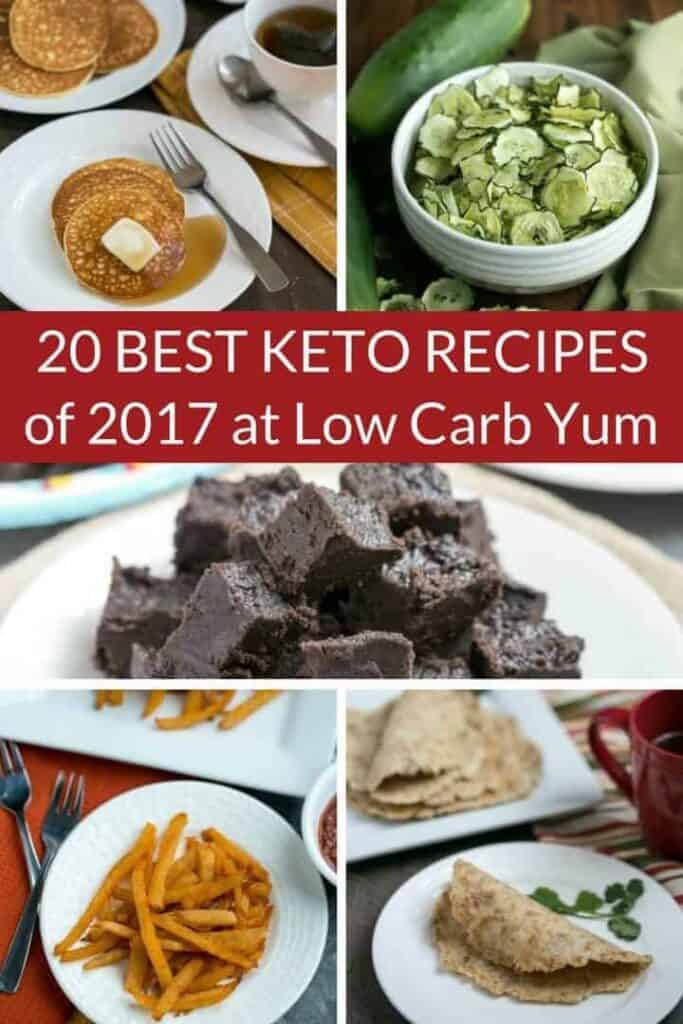 Not sure which low carb recipes to try? Here’s the twenty best keto recipes posted at Low Carb Yum over the last year. Give some a taste to see why they were so popular!

The keto diet is really hot right now, and nothing says it better than the growth of low carb websites like this one.

With so many people having success cutting carbs, low carb recipes are sure to continue being popular.

Now that another year is over, let’s take a look at the 20 Best Keto Recipes posted on Low Carb Yum over the last year.

To be honest, a few of these recipes really surprised me as they didn’t seem to do very well on social media. But, I can tell you that each recipe is as delicious as it looks.

So, without further ado, here’s the top 20 low carb recipes from 2017 based on popularity…

With the success of my cream cheese peanut butter fudge, I decided to try making a chocolate version. It’s rich and creamy and just melts in your mouth. Even those not on a low sugar diet will love this keto treat!

The recipe video for these jicama fries is likely the reason why these low carb French fries became one of the best keto recipes of 2017. But, the health benefits of jicama could be another reason why they are so popular.

One of the hottest kitchen appliances in 2017 was the Instant Pot. So, it’s no surprise that my low carb taco soup was a hit. And, the recipe video was an instant success on social media!

I started cutting back on eggs in 2017 so I came up with an egg free low carb tortilla recipe made using almond flour and psyllium. It’s perfect for all your low carb Mexican recipes and makes an excellent sandwich wrap too.

Fat Head bagels were super popular last year. But when I tried the standard recipe, all I could taste was almond flour. That’s why I came up with a coconut flour version instead. To me, it tastes much better.

Cauliflower is the most versatile low carb vegetable. You can use it to make everything from keto chocolate pudding to low carb rice. Using the same idea as cauliflower pizza crust, these vegetable based low carb breadsticks were one of the best keto recipes post last year.

Low carb pancakes made with cream cheese are super popular with those on a temporary Egg Fast diet plan. But, I found the traditional recipe to be too thin like crepes. I decided to add in some psyllium husks to fluff them up.

If you’ve never wrapped chicken in bacon, it’s something that you must try. You’ll get the juiciest baked chicken ever. And, this recipe can be cooked in an air fryer instead of the oven to save energy.

I was a little surprised that my No Oat Oatmeal cereal made the top 10 of the best keto recipes of 2017 list. However, I love the recipe so much that I created a new low carb porridge recipe from it that cooks up easily in an Instant Pot.

Although 2017 wasn’t a good year for cucumbers in our backyard garden, I did get enough to dehydrate some into chips. And, these are one of the lowest carb chips you can make for guiltless snacking!

My low carb hamburger salad reminded so much of the popular fast food burger that I decided to name it after the Big Mac. I’ve had a lot of comments that the ingredients don’t match exactly to the famous hamburger, but that’s because it was created to be better.

Although most recipes for stuffed peppers add in rice or an alternative to rice, I chose to make mine meaty. The reason was to make the carbs as low as possible. The recipe video was popular on social media which likely helped get these stuffed peppers into the best keto recipes list of 2017.

The recipe for zucchini fries was created by my friend Georgina at Step Away From The Carbs as a guest post on Low Carb Yum. They looked so good that I had to make up a batch to test them out. And, they did not disappoint. It’s no wonder the pin did so well on Pinterest.

This Mexican inspired skillet dish didn’t seem to be a big hit when shared across my social channels. So, it came as a surprise that it made the top 20 best keto recipes list based on traffic statistics. It is delicious so it definitely deserves to be on the list taste-wise.

Another recipe on the list that came as a surprise was the flourless chocolate cake. It’s certainly one of the simplest dessert recipes on the site. It’s a rich treat sure to please any chocolate lover.

We love eating lobster, but usually we just enjoy them steamed. I’ve made bisque a few times so I figured I’d share the low carb recipe I’ve been using. It’s always a hit with friends and family.

It came as a surprise that this simple strawberry cream dessert made the best keto recipe list out of all the recipes posted last year. Not that it’s a bad recipe, but it just didn’t seem very popular. However, it’s an easy treat that whips up in a blender any time you have sweet craving.

It might take a little work, but this casserole combines the best of three recipes in one. It’s an eggplant parmesan, chicken parmesan, and pizza all rolled up in one tasty dish.

One of the things I did in 2017 was an AIP elimination diet. It really helped me figure out what changes I needed to make in my diet. One of those changes was to cut back on my coffee habit. So, I’m drinking more caffeine free tea these days and saving coffee only for special occasions. And, I’m feeling much better now that I’ve kicked my caffeine habit!

There you have it! All the best keto recipes that were posted on Low Carb Yum in 2017. I wish all of you the very best 2018. I know it’s going to get even better.