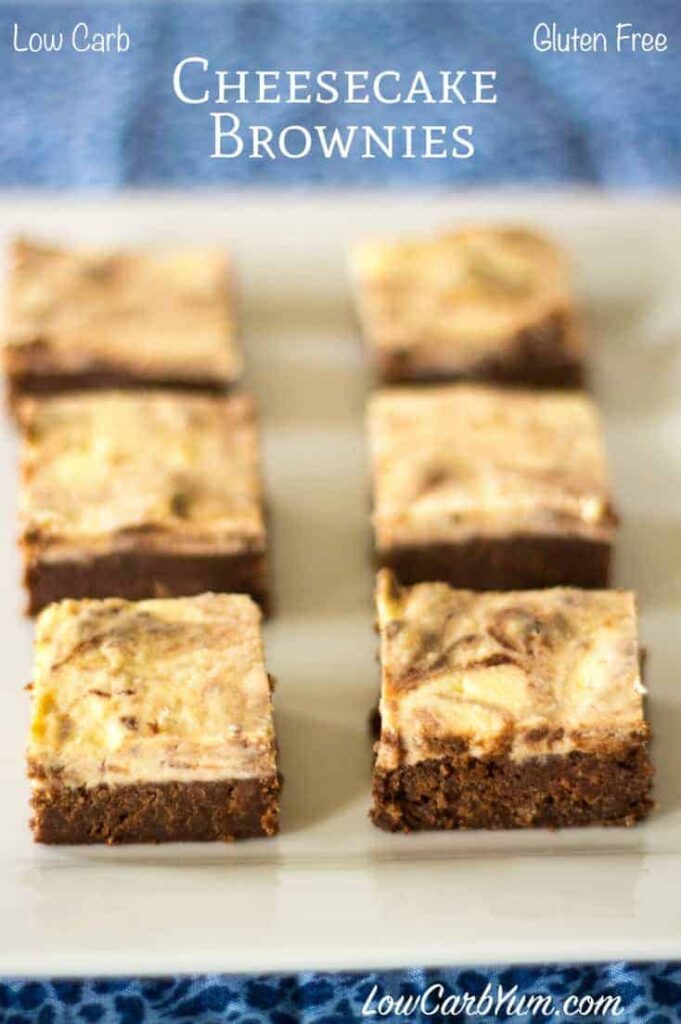 Turn low carb brownies into something special by swirling in a cream cheese mixture on top. These gluten free cheesecake brownies are a delicious treat.

Although I’ve been cutting back on sweets, I decided to make a few treats to enjoy last weekend for Mother’s Day. My kids know that buying sweets for me is difficult and none of them have taken up cooking or baking.

So, if I want a special treat, I usually have to make it myself. I’ve been trying to encourage my older daughter to learn how to make a few simple dishes. She did make the deep dish pizza once and really likes the garlic cheese bread from the low carb dough.

I was really happy when she told me she learned in school today that low fat foods are bad for you. The word is slowly getting out that low fat diets are bad. I hope to convert all of my kids to low carb high fat diets one day, but I know I’ll never convince my husband to give up his sugary snacks.

Since going back to the low carb lifestyle after my last pregnancy, I rarely cheat. I do make exceptions on special occasions, especially when my favorite Filipino foods are on the table.

However, we went out to a Mexican chain restaurant a couple weeks ago and were offered free desserts for all since the kitchen messed up on our order. I wanted to pass on the dessert, but my husband convinced me to make an exception.

I ended up getting the lowest carb option which was a creamy New York style raspberry cheesecake. I know the only bad part of cheesecake is the sugar and crust, but I made sure I enjoyed every sweet bite.

After having that wonderful cheesecake, I’ve been kind of craving cheesecake so I made some raspberry cheesecake ice cream and these gluten free cheesecake brownies. I was originally planning to make these a red velvet type brownie, but changed my mind after adding a bit of natural food coloring to the brownie batter.

You can see the red hue in the picture of the batter. But, it was pretty much non-existent in the finished brownies.

Some may have noticed that I’ve been starting to use more concentrated liquid sweeteners in my sweet recipes. The reason is that erythritol seems to have an affect on me so I’ve been cutting back on bulk sweeteners like Swerve, and Lakanto.

They say that erythritol is the only sugar alcohol that can be completely ignored in the carb count. But, I like to include at least half the carbs from all sugar alcohols.

The more I stay away from sweets, the less I crave them and that’s a good thing for me because I’ve always loved my sweets. There are many times when I would just skip a meal and just eat a sweet snack instead. The problem is that I’ve always been a better baker than cook. I really need to experiment with more savory dishes and limit my sweets.

Since I indulged in quite a few low carb treats this past weekend to celebrate Mother’s Day, I decided to do another five day egg fast this week. Most of the cheesecake brownies I made ended up going in the freezer.

I try to stay away from sweet foods when egg fasting. I’ve really been inspired by the egg fast recipes so I’ll probably making a lot more egg dishes as well as finding additional ways to cut carbs.

I found that these gluten free low carb swirled cheesecake brownies tasted better after being in the refrigerator overnight. I did let them warm up to room temperature before eating as well.

I’ll thaw the frozen ones in the refrigerator a couple at a time over the next several weeks so I won’t be tempted to eat too many at once. When following a low carb diet, particularly a ketogenic one, sweets need to be consumed in moderation if at all.

I’ve realized that I have a habit of overeating, especially when it comes to sweets. So, I’ll be focusing on cutting back this summer and eliminating my addiction to food. 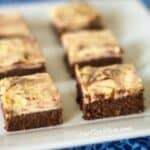 Author: Lisa MarcAurele
3.75 from 4 votes
Turn low carb brownies into something special by swirling in a cream cheese mixture on top. These gluten free cheesecake brownies are a delicious treat.

If needed, the reserved brownie batter can be thinned with some almond milk (or other low carb milk) to make it easier to swirl in. Nutrition per serving: 3.1g erythritol, 1.4g net carbs