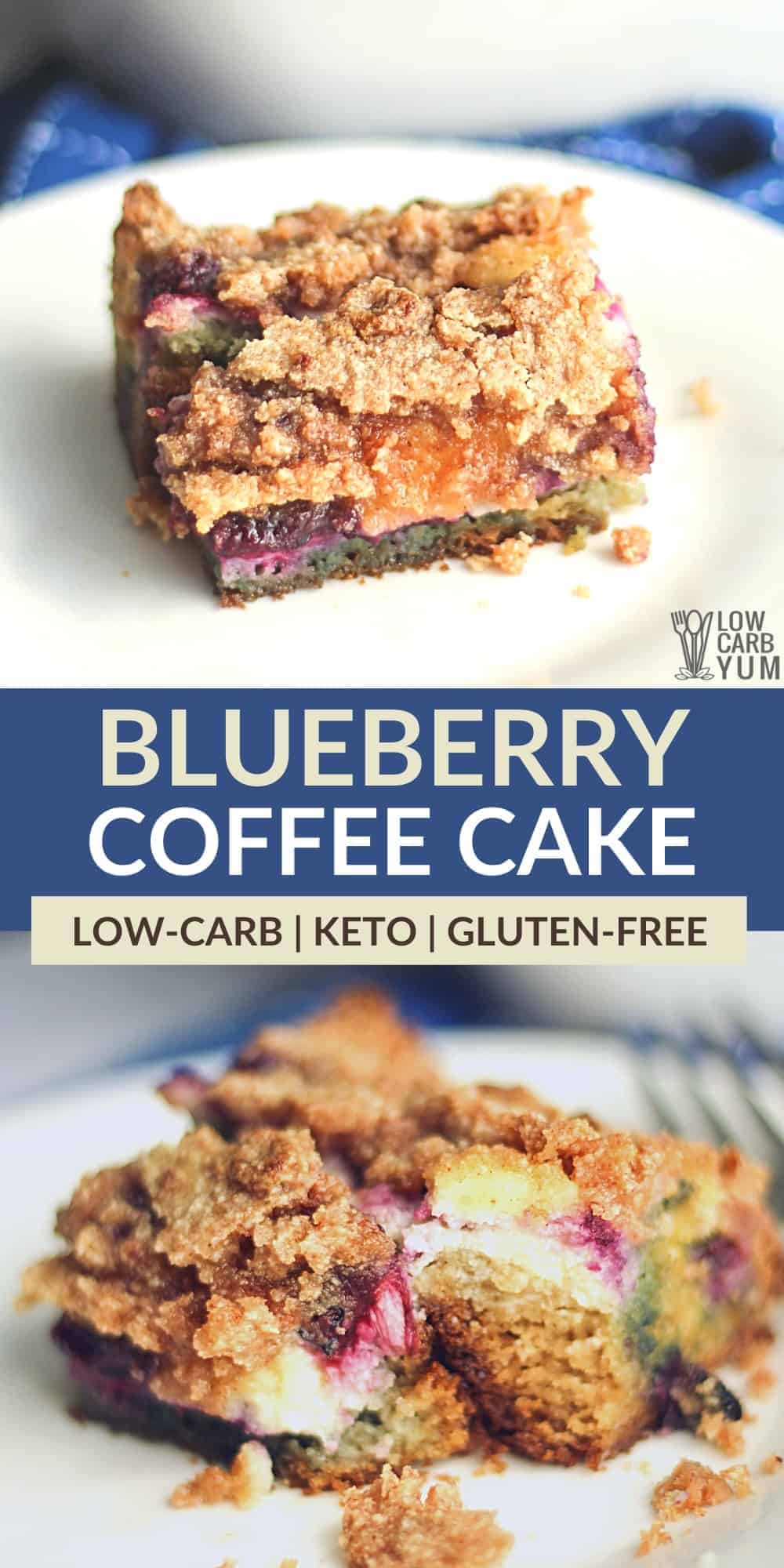 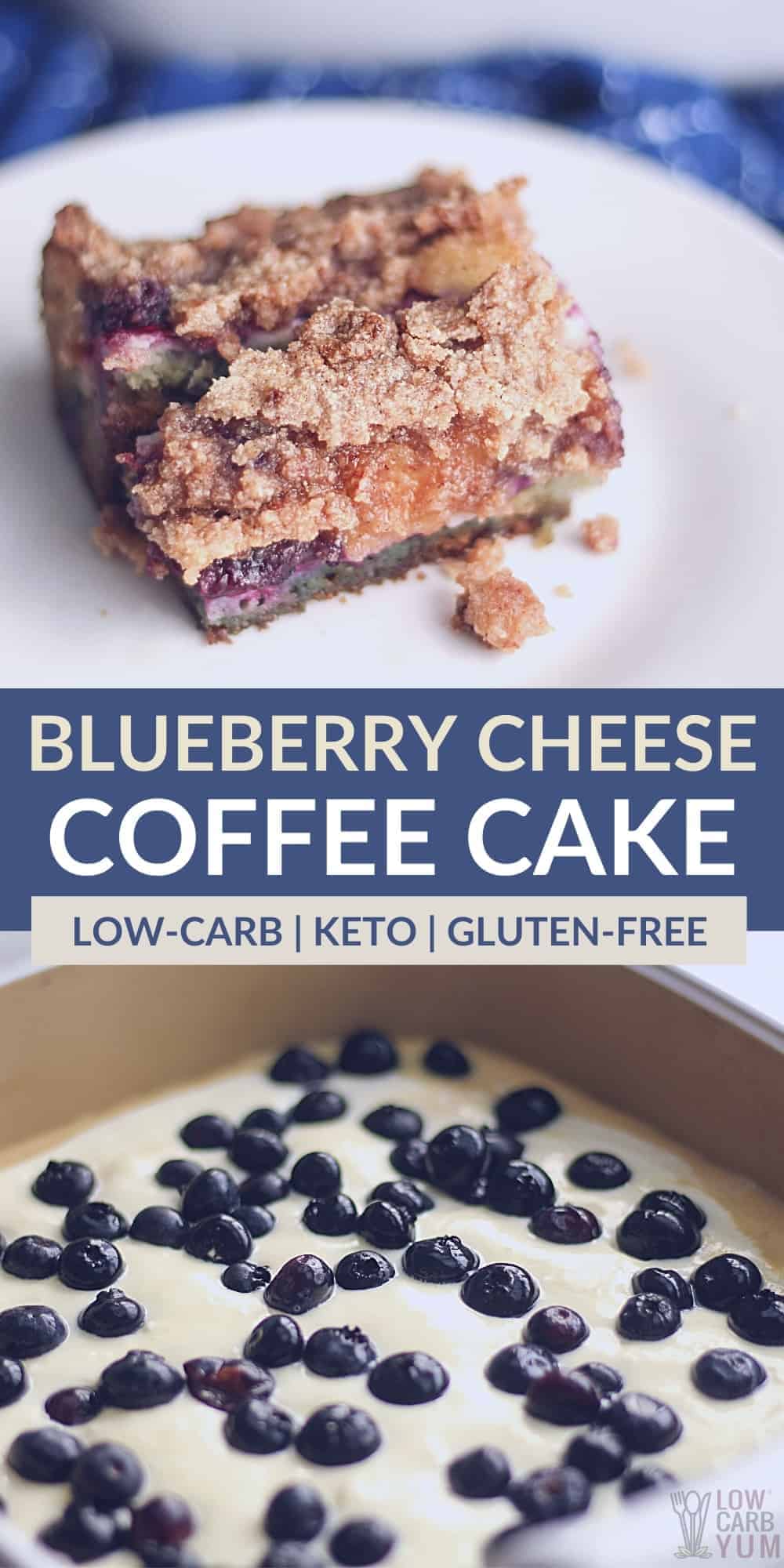 Give this easy to make gluten-free blueberry keto coffee cake a try. The sugar-free cake layer is topped with cream cheese, blueberry, and cinnamon streusel layers.

I found a recipe for low carb blueberry cream cheese coffee cake on the Low Carb Diet site at About.com. Because it got really good reviews, I decided to give it a try.

It's a pretty easy low carb coffee cake to prepare. But you do need to do it in stages as there are three primary layers: the cake bottom, the cream cheese filling, and the streusel topping.

The topping uses almond flour, cinnamon, sweetener, salt, and butter. In the cream cheese filling there's a blend of cream cheese, egg, and sweetener. Blueberries are also sprinkled over the filling.

How to make the gluten free blueberry coffee cake

To begin, preheat the oven to 350°F and grease a 9x9-inch square baking pan. Then get the topping ready by cutting butter into the blend of almond flour, cinnamon, sweetener, and salt (photos 1-4).

The cream cheese filling is made next by mixing the softened cream cheese with egg and sweetener using an electric mixer (photos 5-7).

Then, get the dry ingredients of the cake layer mixed together by whisking almond flour, baking powder, baking soda, cinnamon, salt, and sweetener in a medium bowl (photos 8-11).

The wet ingredients are combined next by mixing sour cream (or yogurt), oil, vanilla extract, sweetener, and eggs in a large bowl with an electric mixer (photos 12 & 13). At this point, the dry ingredients are stirred in (photos 14 & 15).

Now that the layers are prepared, it's time to put them all together. First, spread the cake batter into the pan. Next spread the cream cheese filling over it.

The blueberries are sprinkled on top of the cream cheese layer. Then, the streusel topping is sprinkled over everything for the top layer.

It's then baked for 30 to 40 minutes or until the cake layer tests done. Once it's cooled, it's ready to slice and enjoy.

Modifications to the recipe

The filling in this blueberry gluten free coffee cake does taste similar to a cheese danish. However, it would be much better to have more of this cheesy goodness.

Therefore, I will likely modify it next time I prepare it. I'll use a whole 8 ounce bar of cream cheese when I make it again. And, I'll add in more blueberries.

Sweetness of the blueberry coffee cake

The sugar free cake layer was very moist. At first, I thought it could have been a little sweeter, but I wouldn't want to add any more sweetener as there is a good amount in the entire recipe. And, if you've been on a low carb diet for a while, you may actually want to reduce the sweetness.

The original recipe used Splenda, but I changed it to use a monk fruit sweetener in this low carb coffee cake. I've decided to stop using artificial sweeteners and use only natural based ones.

Monk fruit is my favorite sweetener, but it can be difficult to measure if used in pure form. That's why I like a blend that contains erythritol which is a non-impacting sugar alcohol.

If you decide to give this low carb gluten-free blueberry cream cheese coffee cake a try, I'd love to know what you think. And, also any modifications that you made.

Enjoy this keto friendly breakfast cake! And be sure to leave a comment below to let us know what you think. 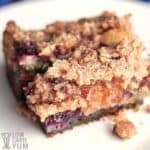 For more cheesy goodness, add in a whole 8 ounce bar of cream cheese. More blueberries can be added if desired (but carb count will be higher due to the natural fruit sugar).