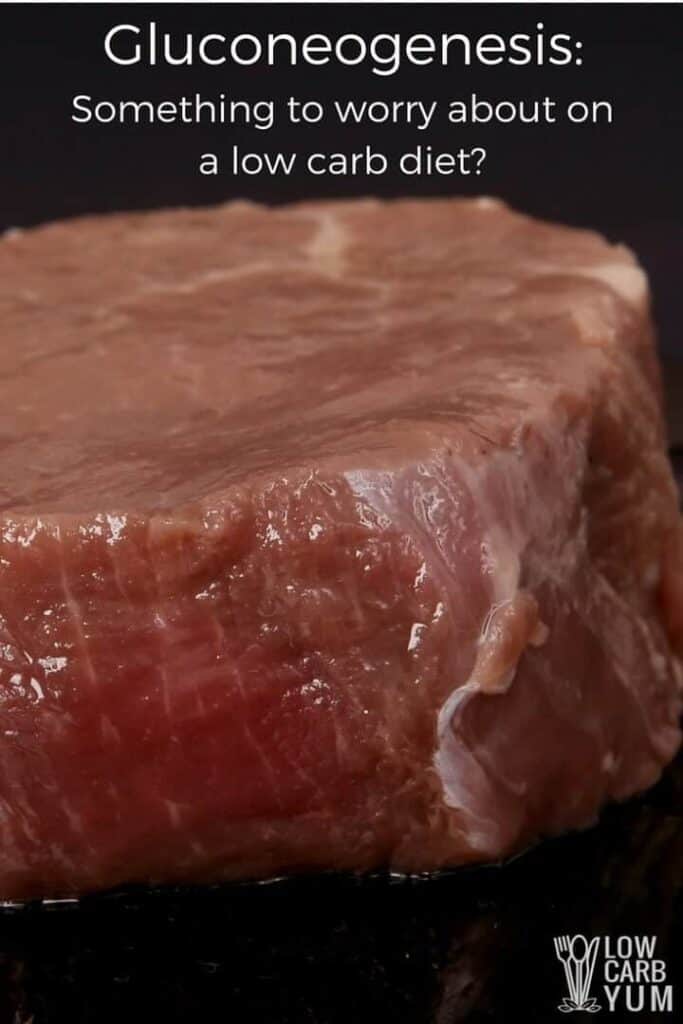 Gluconeogenesis is a pathway by which your body, in order to maintain homeostasis, converts protein and fat into glucose. If you're eating low carb should you really fear this metabolic complex process?

Despite its tongue-tying complex-sounding name, the gluconeogenesis definition is actually quite simple.

Well, actually, if you’re going off the dictionary definition, it does sound rather complicated. According to Merriam Webster, the definition of this complex process is:

“The formation of glucose within the animal body from precursors other than carbohydrates especially by the liver and kidney using amino acids from proteins, glycerol from fats, or lactate produced by muscle during anaerobic glycolysis — called also glyconeogenesis.”

But here’s a much simpler version of the gluconeogenesis definition. It’s a process when your body converts the proteins or dietary fat you eat into blood sugar for energy.

Colette Heimowitz is the Vice President of Nutrition & Education at Atkins Nutritionals, Inc. Yes, the same Atkins as the mega-popular Atkins Diet.

Colette has 20-plus years of experience as a nutritionist, which includes the time she spent with Dr. Atkins as Director of Nutrition at The Atkins Center for Complementary Medicine in New York City. For the last 15 years, Colette has been a prominent mouthpiece of Atkins, authoring several books, including: The New Atkins Made Easy: A Faster, Simpler Way to Shed Weight and Feel Great and Atkins: Eat Right, Not Less.

Although Atkins' nutritional philosophy has never strongly resonated with me, I was surprised to learn a couple things about Atkins. I admit to previously thinking that Atkins was a diet that allows you to eat all the protein and fat you wanted.

I also thought Atkins meant all the bacon, cheese and eggs you want. But Colette informed me that since the Atkins diet was created, the maximum serving size for cheese has always been 4 oz and as for bacon, only two strips. “The all-you-can eat lure was intimate, but not the reality,” says Colette.

In fact, Colette says that there have been changes to the nutritional philosophy over the years. First, the company’s recommendations are now based on at least 80 clinical studies examining low carb diets. Contrast this to its inception when Dr. Atkins’ recommendations were based on anecdotal evidence and reports from his patients.

Second, the Atkins Diet now places much more emphasis on vegetables. The 2010 book, New Atkins For A New You, suggests consuming a minimum of 15 net grams of carbohydrates in the form of colorful vegetables.

The third way Atkins has changed eventually brings us back to the topic of this article. Colette says that Atkins has done a better job of communicating the optimal amount of protein intake. Whereas before, “People thought they could eat all the protein they wanted and that’s not so,” says Colette, who adds that a proper Atkins diet allows for 4-6 oz of protein per meal.

If people were indeed eating all the protein they could stomach, then some Atkins dieters were most likely experiencing gluconeogenesis. Which brings us to this question:

When does gluconeogenesis occur?

There’s a certain level of mandatory blood sugar (glucose) that must be maintained at all times. When there is a low supply of carbs in the diet, there’s not enough to supply the body with all the glucose it needs. But the body has a way of forming glucose from sources other than carbs, i.e. fat and protein.

However, that doesn’t mean you should be afraid of eating protein. On the contrary, protein is critical for maintaining lean body mass.

“You need to keep your protein breakdown synthesis greater than or equal to your protein breakdown,” says Colette, who sits on the Science Advisory Board at the Institute for Integrative Nutrition and is the chair of The Obesity Society Corporate Healthcare Advisor Council Science. “This is especially true if you’re working out and trying to build muscle,” she adds.

Colette says that there’s a certain fear especially in the ketogenic community of this process that can convert protein and fats into glucose. Consequently, this, she says, has led to some people eating too few calories from protein.

“There’s too much hysteria with protein and gluconeogenesis. Instead, the focus should be a matter of taking in the optimal protein intake,” says Colette.

But what is optimal protein intake? How do you know that extra gram of protein won’t lead to excess glucose?

Well, the simple answer is, it depends. Your protein needs are dependent on your activity level, weight, height, gender, body composition, stress and inflammation levels in your body, etc. Moreover, if you don’t want to lose muscle mass if you’re also trying to lose weight, “you better have sufficient protein intake,” says Colette, who recommends, in general, women eat 4-6 oz of protein per meal. As for men, the serving size is 8 oz.

Now it’s true that if you’re eating three 72-oz T-bone steaks a day, the protein will likely convert into glucose.

The human body loves carbohydrates as the major source of readily available energy. And when your body doesn’t receive enough fuel (glucose) from carbs, it will make it from fats and proteins. But again, this is not a bad thing. Colette explains that the relative consistency of blood sugar, that is the body’s mandatory level that it needs, is a remarkable example of the body’s pathway to remain in a homeostatic state.

The body will get glucose any way it can, if it needs it. Carbs are the first, easiest source of energy. The liver plays a vital role in the control of blood sugar. It can synthesize glucose to glycogen (to fuel your muscles), and ultimately to fat when the supply of carbs is abundant. When the supply of carbs is low, however, the liver can convert glycogen (stored sugar bundles) to glucose. In addition, the liver can also synthesize glucose from amino acids (the building blocks of protein) and glycerol from fat.

The gluconeogenesis pathway, then, is an over-correction. Although some people fear the conversion of protein to glucose, most of the concerns about eating too much protein are unfounded, argues Colette.

“With a typical intake of 12 to 24 ounces of protein daily, you can feel satisfied, preserve muscle and not worry about converting too much to blood sugar,” she contends.

However, if you’re skipping lots of meals or restricting calories, your body might convert some of that dietary protein you’re eating into glucose. All in all, as long as you avoid excessive protein intake, you’re likely fine, says Colette, who also is a Corporate Advisory Board member of the University of Missouri’s Department of Nutrition and Exercise Physiology.

The oxidation (burning up) of glucose supplies more than half of the energy of your body. The glucose in the blood eventually supplies glycogen for muscles.

However, your body has only a very small storage capacity of glycogen. And if you’re working out hardcore, you need to fuel your muscles with more glycogen. As a result, you need enough glucose to supply your brain and trillions of cells to function.

If you’re eating low-carb (arguably, this means around 50 net grams or less), and a high-fat diet (at least 60% of calories), then you’re body will get all the energy it needs from fatty acids (ketones). However, if by chance your body does convert some of the dietary fat or protein into glucose, that’s not a bad thing.

The process of producing glucose from fat or protein is just your body’s way of maintaining a state of equilibrium. It's not a sentence of dreadful weight gain.

By now, hopefully you understand the gluconeogenesis definition. In summary, the body will convert fat and protein to glucose to meet the level of mandatory blood sugar. Colette says that even if you eat a low carb diet, you should try to get about 20% of your calories from protein (and 60-70 percent from fat).

Feeling less fearful of protein now? The next time someone asks you, “what is gluconeogenesis?” you can say it’s no big deal.