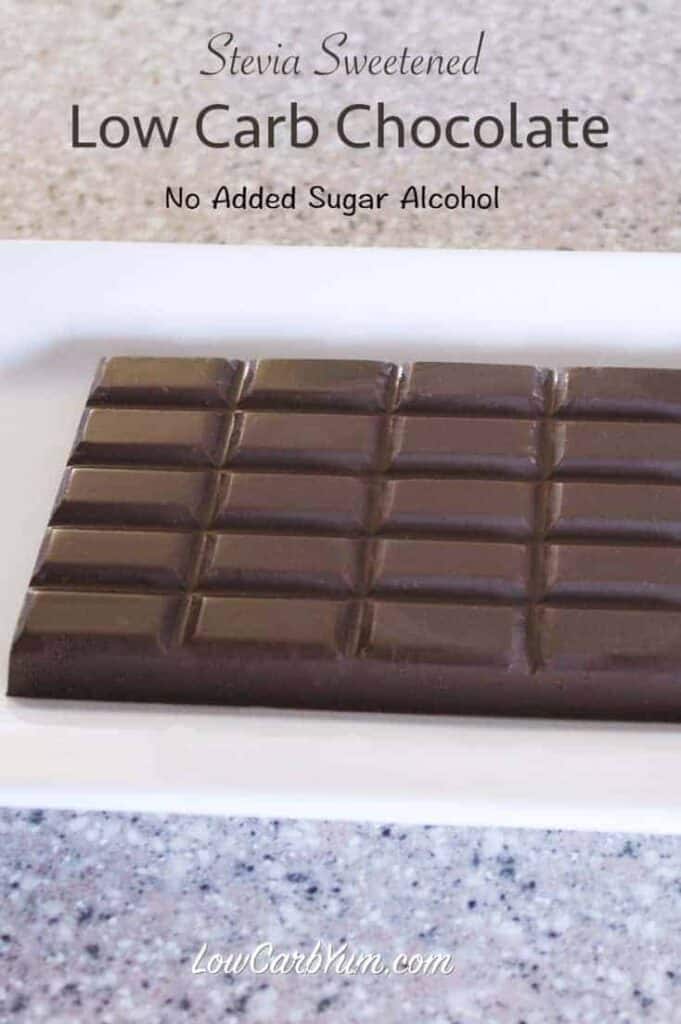 A sugar free chocolate recipe made with stevia. It contains no added sugar alcohol. It uses natural sweeteners along with cocoa butter and unsweetened cocoa.

Although I have another recipe for homemade low carb chocolate bars made with stevia that I've used for several years, this new recipe has about the same net carbs. But is also has much more fiber.

I omitted the need for an unsweetened chocolate bar and used unsweetened cocoa with additional cocoa butter instead. And, this new sugar free chocolate recipe with stevia has no added sugar alcohol. There are some folks who are sensitive to all sugar alcohols, including erythritol, so it's nice to have some options for them.

I find that stevia by itself does not taste as good as when it is mixed with another low carb sweetener. That's why most stevia sold is blended with the sugar alcohol erythritol.

Stevia is also much easier to measure and use as a sugar replacement when bulked up with another sweetener like erythritol. However, I find that erythritol often forms insoluble crystals in chocolate that can make a chocolate bar texture crunchy when it should be smooth and silky.

My new sweetener of choice to blend with stevia for my sugar free chocolate recipe is inulin or allulose. Neither of these will form crystals like erythritol so the chocolate remains smooth as it should be. However, I prefer leaving them out when possible.

To make this smooth low carb chocolate bar, you'll need to have food grade cocoa butter which is the required base for all chocolate bars. I've seen it sold in jars, but breaking it up can sometimes be difficult when it's a solid piece formed in a jar. I like to buy it in a bag that contains various size pieces of cocoa butter.

After adding the unsweetened cocoa and stevia extract to the melted cocoa butter, the melted mixture remained smooth. Usually, after adding stevia with erythritol, the mixture becomes gritty because the erythritol does not blend in, even with using powdered erythritol.

You can use a fiber based bulk sweetener along with stevia and this sugar free chocolate recipe has a much smoother texture. And, you don't have to worry about having the undissolved granular sweetener.

I added vanilla extract just before pouring into the chocolate bar mold. I noticed that the extract did cause the mix to thicken a bit. To remedy this, I'm going to try using a vanilla powder next time instead of the liquid extract.

This is definitely the smoothest low carb chocolate I have made to date and the taste is wonderful. It's great to be able to indulge in chocolate on a low carb diet.

To make my own low carb chocolate, I use the following items:

Not into making your own chocolate? LC Foods has some fantastic low carb sweet snacks to buy online! 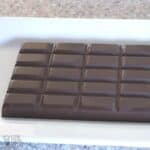 Slowly increase stevia extract to about ½ teaspoon testing to make sure you don't add too much. Half of the stevia can be replaced with up to ¼ cup of a powdered sweetener. However, erythritol based sweeteners can crystallize.