Last weekend, I came down with a mild cold and was looking for a recipe for some comforting low carb chicken soup. I found a recipe for one that included kale at an AIP Lifestyle website and modified it slightly.

For some reason, my soup did not come out creamy like the original recipe when I first made it in the Crock Pot. But, it was still very tasty and did comfort my cold.

To keep carbs to a minimum, I didn't use the full amount of onion. That might be why my soup wasn't as creamy as the original chicken kale soup.

I added only ⅓ cup instead of a full cup of onions. The onion, olive oil and chicken broth were blended together in my NutriBullet.

The resulting mixture did look like cream. So, I expected the soup to come out looking creamy. However, it didn't stay that way. But, on my second try in the pressure cooker, the soup did come out with a white creamy base and I used more onion.

Infusing the onion, olive oil, and broth together in the NutriBullet did seem thicken the chicken kale soup in the slow cooker. It was definitely thicker than it would have been if these ingredients were added separately.

I'll add in more onion next time to see if it makes a difference. Even though the soup wasn't creamy, it was certainly delicious.

The baby kale leaves kind of took over the slow cooker when I added them. But, I knew that they would wilt during cooking and reduce down.

I used a whole 5 ounce package because the label stated that it contained two servings which seemed to be the right amount. The added lemon juice in the chicken kale soup gives just a hint of lemon flavor and the olive oil provides plenty of fat.

Although you could make this soup on the stove, I didn't want to have to babysit the pot. It was more convenient to make a slow cooker soup. But, it's also a perfect pressure cooker chicken soup for the Instant Pot too.

I started the soup in morning and then put it in the crock pot slow cooker so it would be ready for an early afternoon lunch. While cooking, the soup filled the house with a lovely aroma. I knew it was going to be worth the wait.

This autoimmune protocol friendly soup is definitely something I would make again! 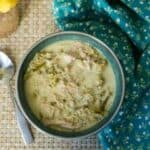