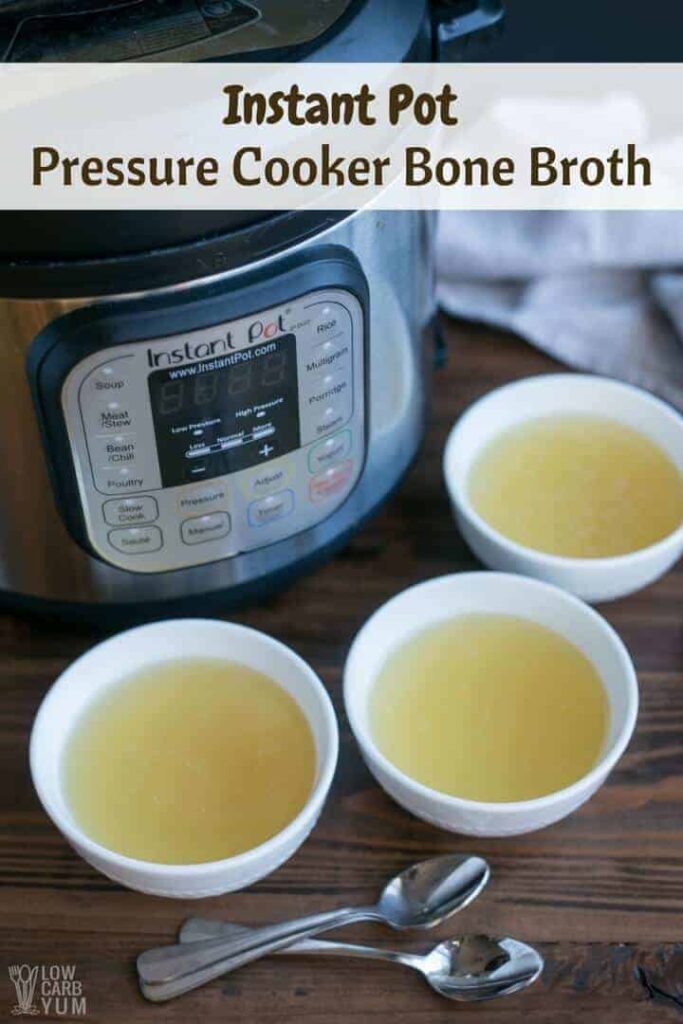 An easy Instant Pot bone broth recipe using the pressure cooker setting to speed up the cooking time. It takes only a few hours instead of a whole day.

I’m starting to really love the convenience of pressure cooking in the Instant Pot pressure cooker. I’ve got a six quart 7-in-1 multi-cooker version and I use it all the time to make low carb yogurt.

Since giving up dairy a couple weeks ago, I actually started to make yogurt out of coconut cream. And, after several attempts, I think I finally perfected the recipe. I’ll be sharing that one soon.

Today, I’m sharing an Instant Pot bone broth recipe that I’ve been using as a base for soups. It’s a great way to use those bones left over from a pressure cooker whole chicken. Just be sure to use organic chicken for the most benefits.

Although I’ve been using chicken bones, the process is the same for beef and other animal bones. In fact, it’s really easily to convert the standard keto beef bone broth recipe into one made in the Instant Pot.

That’s why I’m now making Instant Pot bone broth rather than simmering the bones in the crock pot for a day. And, I’m getting the same gelatin from the bones in a much shorter cooking time.

When making bone broth in a pressure cooker, you only need to cook it for a few short hours to release the highly prized gelatin. You’ll know you’ve made a great bone broth if it turns into a Jello when refrigerated.

I typically have to scoop mine out of the container rather than pour it when making soup. That’s what you want. Your bone broth should NOT be pourable when chilled.

Another thing that helps release the minerals from the bones is apple cider vinegar. I like to use the raw unfiltered kind as it has beneficial bacteria and acetic acid that’s great for digestion.

Make sure you don’t omit the vinegar in the Instant Pot bone broth recipe. If you do, you may not get as much of the gelatin out and will miss out in releasing the maximum amount in cooking

The other thing is that you probably won’t release all of the minerals from the bones. Some people like to save the bones after making pressure cooker bone broth to use in another batch.

To save the bones, you’ll simply place them in a container and freeze them until needed. You can just keep them with all the vegetable scraps that you’ve been saving for the stock.

With the convenience of an electric pressure cooker, there’s really no reason to go out and buy broth. But, if you do, I recommend only buying a high quality one like Fire & Kettle which uses only organic ingredients. And, their beef broth is grass-fed.

The cost of buying a whole organic chicken is typically cheaper than buying chicken parts and organic bone broth. And, you’ll get a much fresher stock for soups and stews. With the Instant Pot, time really shouldn’t be an issue any more.

If you’ve never made your own broth from bones. You certainly need to give it a try. It’s so simple and re-purposes those kitchen scraps that you’d otherwise be throwing away. 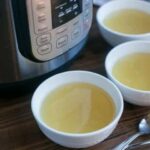