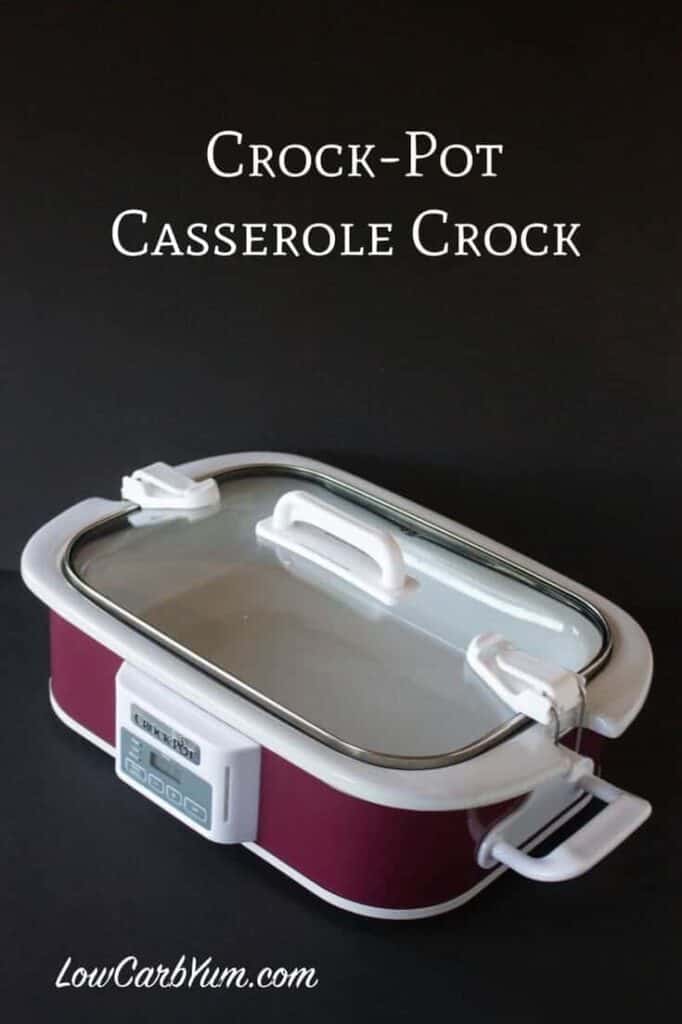 A low carb ground beef eggplant casserole that bakes in a casserole crock pot. It has a hamburger crust topped with layers of eggplant, tomato, and cheese.

Disclaimer: The casserole crock pot was purchased by me and all opinions are my own. I am not affiliated in any way with the Crock-Pot company.

Do you love simple and inexpensive low carb casseroles? I certainly do and lately I just don't have a lot of time for cooking. That's why I recently bought a Casserole Crock Pot so I could do more easy low carb cooking.

To try out the new crock pot, I made a ground beef keto eggplant casserole in it. As many of you regular readers know, blogging is something I do part-time to support the low carb community and keep track of recipes I've tried. I'm a busy working mom as well.

I put in over forty hours a week at my real job working as an engineer in a power plant and come home to a very active two-year-old daughter. If that isn't enough, I've also been spending time over the last month helping my husband promote his wrestling business, MarcAurele Wrestling.

Over ten years ago, my husband started his own youth wrestling club so our son had a place to train locally year round.

Although my husband was very into wrestling as a youth, even winning a world title in Greco Roman in middle school and going to a Division I college on full scholarship, he stopped wrestling completely about a month before we got married.

This crock pot ground beef eggplant casserole is a modification of my hamburger pie with eggplant recipe. I basically just doubled the recipe and slow cooked it in the casserole crock pot instead of the oven. This allowed me to run errands for a few hours and not have to babysit the oven.

It wasn't until our son showed an interest in wrestling, when he was in first grade, that my husband decided to return to the sport as a coach.

Our son had a very good wrestling career, but now that he's in college, he has decided to concentrate on his academics as he is majoring in Engineering which requires a lot of studying to keep a high grade point average.

Wrestling did give my son a lot of discipline and confidence as well as teaching him that hard work does pay off. He is now in the Honor's program at college and just got inducted honor society for being in the top of his class going into his sophomore year.

His future is looking very bright and I expect him to be very successful at whatever he chooses to do!

Even though our son no longer wrestles on any team, my husband has recently been putting in a lot of time at his wrestling gym to make sure all the youth wrestlers in his club will have the support they need to be successful in life past their wrestling career just like our son.

The great thing about this recipe is that you don't have to brown the ground beef. I also didn't pre-cook the eggplant like I did in the original recipe. I just salted the cut eggplant and let it sit for a bit and then mixed it with the olive oil before putting it in the crock-pot.

I had no idea that casserole crock pots existed until I started shopping for a slow cooker. The 9x13 crock is the standard casserole size and you can even put it in the oven to brown the top of the casserole if you wish. The best thing is that once your casserole is done, you can keep it warm by leaving it in the slow cooker on the warm setting.

This is the first crock pot that I've owned that has the programmable feature. I debated whether I really wanted this feature, but opted to try it.

I'm so glad I bought the programmable model because the shallow size of the casserole dish means that most recipes are done in only 3-4 hours. Once the cooking time you set has past, the crock pot automatically goes to the warm mode.

This is a great feature when you are out and running late as you won't have to worry about your meal getting overcooked!

I have also found that this crock pot is great for keeping food warm at parties. I made a skillet dish for a recent get together and put the food in this casserole crock pot to keep it warm for several hours. This new appliance is going to get some good use over the holidays!

I really like the versatility of this new crock pot. You could even bake the casserole in the oven first and then put it in the holder for keeping it warm during serving.

I'm going to make some room in my kitchen storage closet so I can look into getting another crock pot or two. There is a new model that lets you brown the meat in the crock pot and then add the rest of the ingredients to slow cook. The one bowl idea for slow cooking is something that sounds great!

How many crock pots do you own? I have three slow cookers, a dip crock and a new lunch size crock pot for warming food at work. One of the slow cookers is a 3-in-1 crock pot, but I still only consider that a single slow cooker. 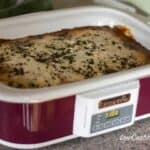