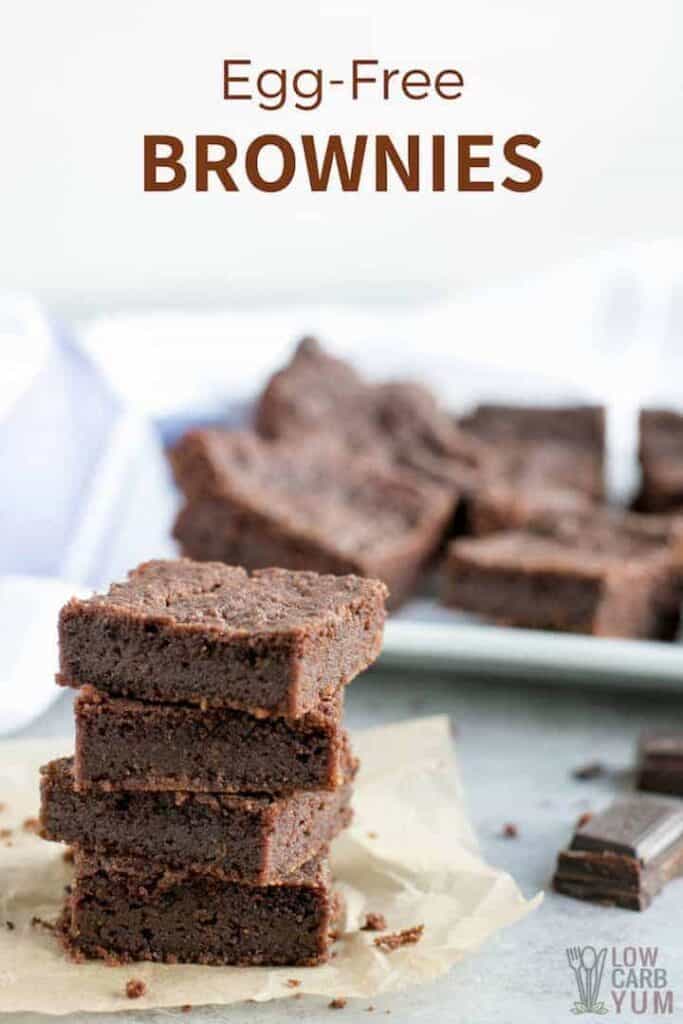 Brownies without eggs taste fantastic, won't spike your blood sugar, and the recipe takes 5 minutes to prepare! They're perfect for those with egg allergies or egg intolerance.

In the world of keto desserts, brownies are one of the most popular. But can you make a gluten free sugar free brownie recipe without eggs?

YES, you can! I'll show you how to make brownies without eggs, and you will be able to enjoy them guilt-free!

How to make brownies without eggs

Where making the batter is concerned, egg free brownies are not much different than other recipes for keto brownies. The steps are pretty simple, too.

Obviously, the most important step in creating healthy desserts is keeping the sugar and overall net grams of carbs low. For this gluten-free sugar-free brownie recipe, I use Lakanto Monk Fruit.

Never heard of Monk Fruit? There’s a good reason you probably never heard of it when you were a young kid. For starters, it’s native to Southeast Asia, particularly China and Thailand.

This green, mini-melon looking fruit, is so named because of the ancient monks who used it for therapeutic purposes.

If you’ve never had monk fruit before, like stevia, the taste may take some getting used to.

However, you have to be willing to make some sacrifices if you want a keto chocolate dessert that has just two grams of net carbs.

Some people complain about stevia having a bitter aftertaste. Personally, I don’t find it unappetizing, but both stevia and monk fruit are several times sweeter than granulated sugar.

Therefore, if you don’t like treats very sweet, use less monk fruit sweetener when you make the egg free brownies recipe.

Nonetheless, aren’t we lucky to live in an age where we can eat more than one brownie if we want and not worry about our blood sugar level?

What are the benefits of gelatin in brownies?

As you can see in the list of ingredients below, this no egg brownies recipe calls for a tablespoon of grass-fed gelatin.

Gelatin is a very effective thickening agent. As a result, it replaces the eggs in the recipe.

But beyond that, gelatin offers numerous health benefits. For starters, it helps support your body’s collagen.

Collagen is the most abundant protein in the human body. Out of the tens of thousands of proteins that make up your body, about one third is collagen.

You can think of collagen as a glue-like support structure. Collagen peptides and bone broth are immensely popular these days.

So you’re probably already familiar with how eating foods with collagen can help your skin and joints and digestive system.

Gelatin is basically collagen protein that has been cooled and congealed.

Although the typical American diet includes plenty of meat, gelatin contains a specific amino acid profile that meat does not offer.

It’s because of its high amount of the amino acids such as glycine, glutamic acid, proline and hydroxyproline, that gelatin and collagen are considered nutritional powerhouses.

One serving of gelatin contains about 20 grams of collagen (and nearly that much in protein).

Can you freeze egg-free brownies?

Aside from their nutritional value, one of the best features of the egg-free brownies is that they freeze beautifully!
Just be sure to allow them enough time to thaw before you serve them. It's best to thaw them in the refrigerator. However, if you plan to serve them the same day you remove them from the freezer, you can safely thaw them at room temperature.

Not only is this gluten free sugar free brownie recipe ridiculously easy to make, but it also makes the best guilt-free brownies!

The nutritional information is pretty amazing, especially when you consider that this is a chocolate dessert!

But if you’re checking this egg free brownie recipe out, chances are good that you want to know about the carb count.

Believe it or not, these brownies have just 4 grams of total carbs and only 2 net grams! 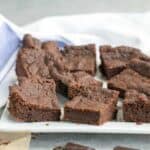 5 from 5 votes
A satisfying dessert with only 2 grams of net carbs that only takes 5 minutes to prepare. These easy to make brownies not only tastes great, they won't spike your blood sugar or bother those with a sensitivity to eggs.
Prep Time:5 mins
Cook Time:30 mins
Total Time:35 mins
Course: Dessert, Snack
Cuisine: American
Print Pin Review Recipe Save Recipe View Collections
Servings: 16 people
Calories: 146

Erythritol in low carb sweetener is not included in the count as it has no impact. Other nut or seed butters can be used in place of almond butter if desired.