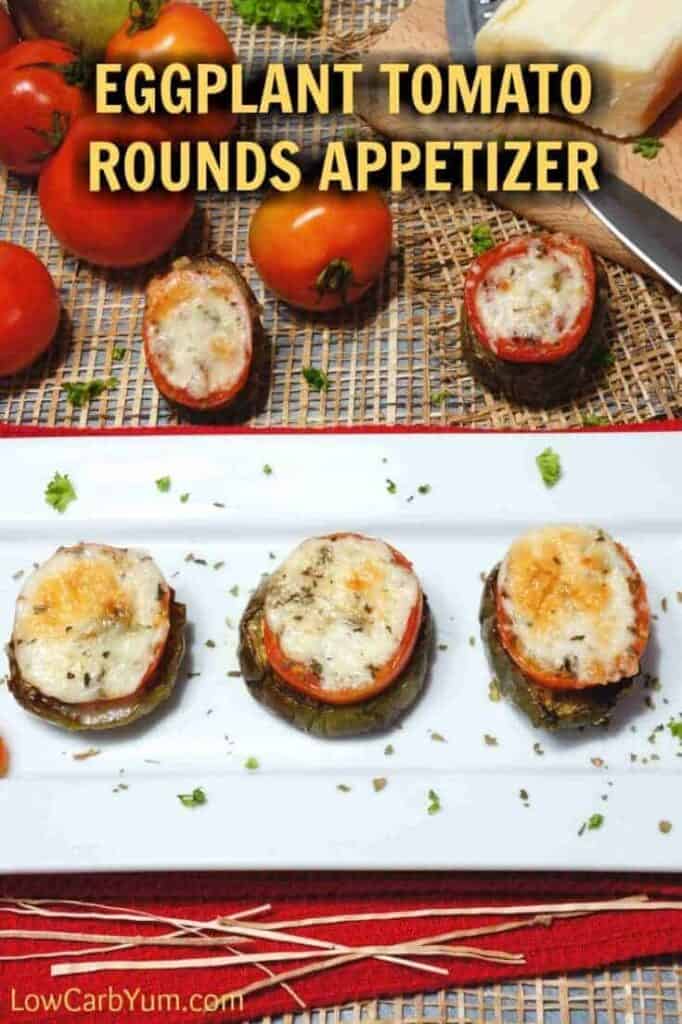 A simple eggplant tomato recipe that's like a mini pizza appetizer. This is a quick and tasty way to serve fresh eggplant and tomato from the garden.

I had a lot of end of summer tomatoes on hand. So I took a regular eggplant mini pizza recipe and used fresh garden tomatoes in place of the sauce.

Although the eggplant is usually peeled before slicing, I decided to keep the skin on. There are nutrients such as fiber in the skin. So, I kept it in place.

You may want to peel the eggplant if you're trying to disguise them under the tomato. The peel may give them away if you are trying to sneak them in.

This eggplant tomato recipe is a super easy way to use up those summer vegetables. We didn't plant eggplants this year, so I grabbed some at a farmer's market.

For the cheese topping, I used mozzarella. Parmesan would be a good one to sprinkle in too. Be sure to bake the appetizer rounds up until the cheese begins to brown. You may want to leave the cheese off on a few for those following a dairy-free or paleo diet.

You'll want to use eggplants and tomatoes that are similar in size when sliced. This will make them look a little nicer. They don't have to be exactly the same size, but you don't want a huge slice of eggplant with a tiny tomato slice on top.

If it's too hot to turn on the oven, I've had success cooking these on the grill as well. I usually grill the eggplant slices first and then add the tomato and cheese  at the end of cooking.

Some people like to salt eggplant slices first to remove any bitter taste before cooking. I don't think that's necessary for this mini pizza eggplant tomato recipe.

If you choose to remove any bitterness in the eggplant, the process is simple. Simply sprinkle salt on the slices and let them sit in a colander for about 30 minutes. This draws liquid out of the eggplant that may be bitter.

There are lots of low carb eggplant recipes. You can find many of them here. You can even use eggplant as a bread replacement for "bread" pudding and French toast!

I also love to use eggplant and tomato to make a quick and easy hamburger skillet dish. It's a nice blend of ground beef, diced eggplant and diced tomatoes. I shared that recipe on this post.

What's your favorite way to use up extra tomatoes in the garden? 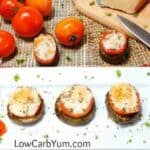 © LowCarbYum.com
Unauthorized use of this material without written permission from Lisa MarcAurele is strictly prohibited unless for personal offline purposes.
Single photos may be used, provided that full credit is given to LowCarbYum.com along with a link back to the original content.
« Summer Zucchini and Squash Salad with Tomatoes
Low Carb Pumpkin Bars Recipe with a Gluten Free Option »