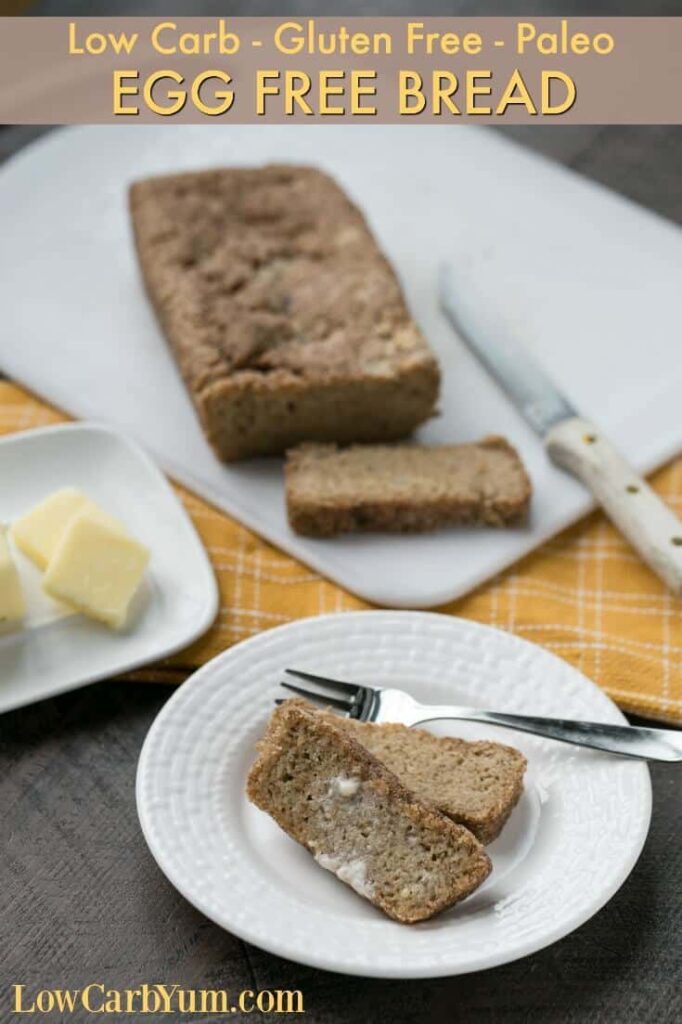 Having trouble finding a low-carb bread without eggs? Here's a paleo friendly gluten-free and egg-free bread with psyllium that's also low in carbs!

I've been seeing a holistic health coach who specializes in functional medicine. It's just one of the things I'm doing to stay well as I get older.

One of the things I discovered in a blood test is that my body has become sensitive to the whites of chicken eggs.  It's not an allergy, but a condition where my immune system has a strong reaction to it.

Duck egg whites are listed as a substitute and so is cream of tartar. Unfortunately, I don't have easy access to duck eggs here in the northeast during the winter.

What is a low carb eater to do without eggs? Well, I also learned that psyllium is a good substitute so I came up with this gluten free egg free bread recipe.

I was told to eliminate eggs for three to six months. And, I'll be using homeopathic drops to lessen the food sensitivity.

In the same test, I discovered that I have a moderate reaction to corn, mushrooms, codfish, locust bean gum, white potatoes, and sweet potatoes. So, I'm refraining from these foods as well.

Corn is also a common ingredient that can be hidden in dairy products, sweeteners, and supplements. It's very difficult to avoid.

Thankfully, there was no dairy sensitivity found so I can enjoy all the butter I want. That's why I chose to use it in this gluten free egg free bread recipe instead of the paleo approved ghee.

Why give up a food item if you don't have to, right? I mean giving up eggs is going to be huge for me so I'm looking to find a reliable source of duck eggs.

I also didn't show any sensitivity to wheat so going gluten free isn't something I need to do. However, the fact that I rarely eat gluten may be a reason why I didn't show a reaction to it.

I'm just glad that I've been spending so much time making my own food over the years. It's much easier to deal with food sensitivities when you make all your meals from scratch.

Because of my newly found sensitivity to eggs, you'll be seeing a lot more egg free recipes from me this year. But, I am hoping to get some duck eggs so I can bake normally.

I have read that using duck eggs in baking results in higher rise. So, I'm interested in trying that out. Who knows, I may find that I prefer eating eggs from ducks rather than chickens.

Since this gluten free egg free bread came out pretty good, I'll be testing psyllium husks in other low carb baked goods. I may start out easy with some cookies.

I've already cut back significantly on erythritol based sweeteners. And, now that I have a confirmed sensitivity to corn, I'll only buy a corn free stevia blend.

I'm often asked what eggs can be replaced with in recipes. And, to be honest, until baking this gluten free egg free bread, I never really experimented with egg replacers.

Apparently, a lot of people have either an allergy or sensitivity to eggs. It could be due to the overuse of eggs in our foods so there's a lot of exposure.

Since moving to low carb, I've been eating a ton of eggs. So, maybe I have just been overdoing it. Now that I know, I can at least begin to address the issue.

Have you ever been tested for food sensitivities? It seems to be a pretty common test recommended by alternative health practitioners. I'm glad I had it done. 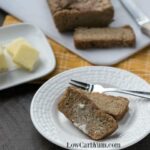 The amount of butter could probably be reduced but has not been tested. 2g net carbs per slice