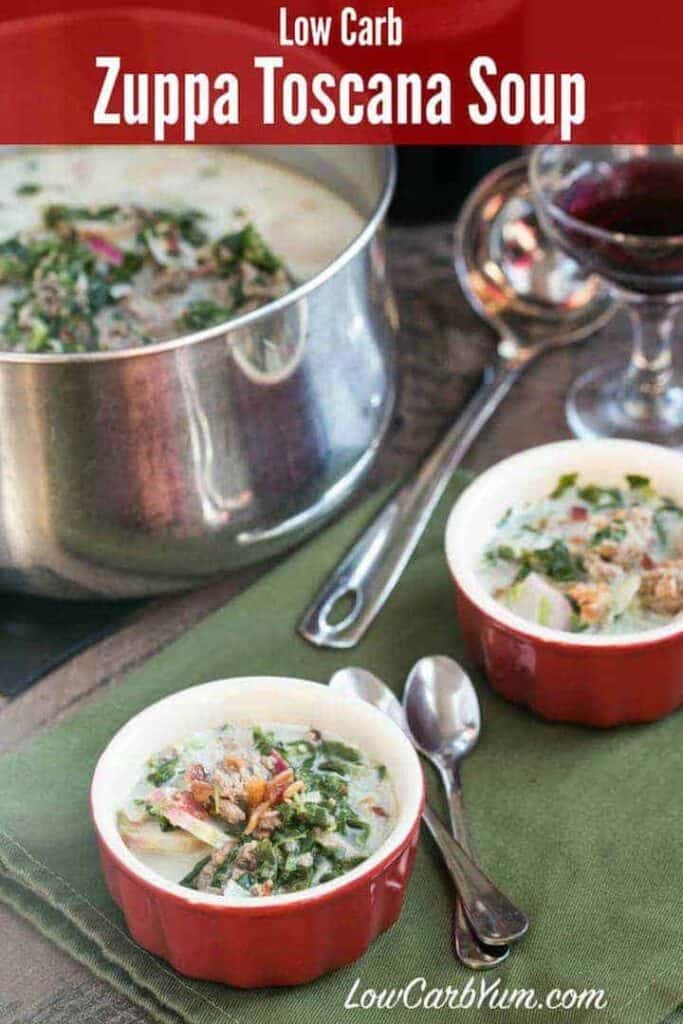 An easy to make low carb zuppa toscana soup recipe that is chock full of sausage and healthy vegetables. It's a favorite Italian cream soup.

It's so cold outside that I cringe every time I have to go out. Cold is something that doesn't go over well with me and I do whatever I can to stay warm.

What makes it even worse is that it's been super windy too making it feel ten times colder. At work, I learned all the indoor paths available to get me where I need to go.

I've been making a lot of low carb soups and stews to keep me warm the past month. I even put together a recipe list of my favorites. I've just discovered another great recipe. It's a delicious low carb Zuppa Toscana soup.

I first discovered Zuppa Toscana at the Olive Garden chain restaurant. It was always my favorite appetizer soup at that restaurant before moving to low carb.

If you remove the potatoes, the rest of the soup is low carb. So, for my homemade version, I replaced the potatoes with low carb radishes. My recipe for low carb Zuppa Toscana also is a lot chunkier than the soup I've had at Olive Garden.

Soup is one of the easiest dishes you can make. It's also something that cooks up in a single pot. We have tons of venison sausage in the freezer so I came up with this low carb Zuppa Toscana as a way to use up some of that meat.

And, it made a lot of soup. That was a welcome hot meal over the last week as temperatures dropped well below freezing with wind chills making it feel much colder.

I used hot venison sausage which was pretty spicy so I didn't need to add the usual crushed pepper flake seasoning.  I also used a lot more sausage than typically added to Zuppa Toscana soup.

I was making a large pot of soup so I used two 32 ounce containers of organic chicken broth. I let the broth come to a boil before adding the vegetables.

A food processor is the best way to quickly slice the radishes, especially if you are using the smaller sized ones. I'd say it took less than 30 seconds to slice up a whole pound using the rotary slicing blade.

Radishes typically take a little longer to cook than potatoes, so I let the soup simmer until the radishes had a texture similar to cooked potatoes. I prefer using the white radishes like Daikon as a low carb potato, but I couldn't find any so I used the red ones.

It saves a little time to use the chopped frozen spinach, but you can certainly use fresh spinach and chop it up yourself. I just like the convenience of keeping frozen vegetables stocked because they keep so long and they often save me a trip to buy fresh.

I am totally in love with this low carb Zuppa Toscana soup and I am certainly going to make it over and over again. We have loads of frozen venison in the freezer so I have plenty of meat to make more. I'd say this soup would also freeze well so I it would be a good choice if you are into make ahead freezer meals.

There is no issue in getting this soup eaten in a week, even if it's just me eating it. I have a lunch crock pot at my desk that I use at work to heat up my food.

I find it's a much better way to reheat food compared to using the microwave. Soups make a perfect workday meal and warming it in the lunch crock pot ensures it will be at the perfect temperature!

Be sure to use a large pot when making this soup because the recipe makes a lot. You can freeze some of it if you can't eat it all in a week or half the recipe. Like most soups, there is plenty of room for modification in the recipe so feel free to change it up to suit your own tastes!

There are so many choices when it comes to low carb soups. Do you have a favorite soup that you'd like to see made low carb? Drop a comment and I'll see what I can come up with! 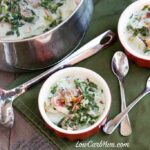 Makes about 12 cups of soup Net carbs per serving: 2.6g