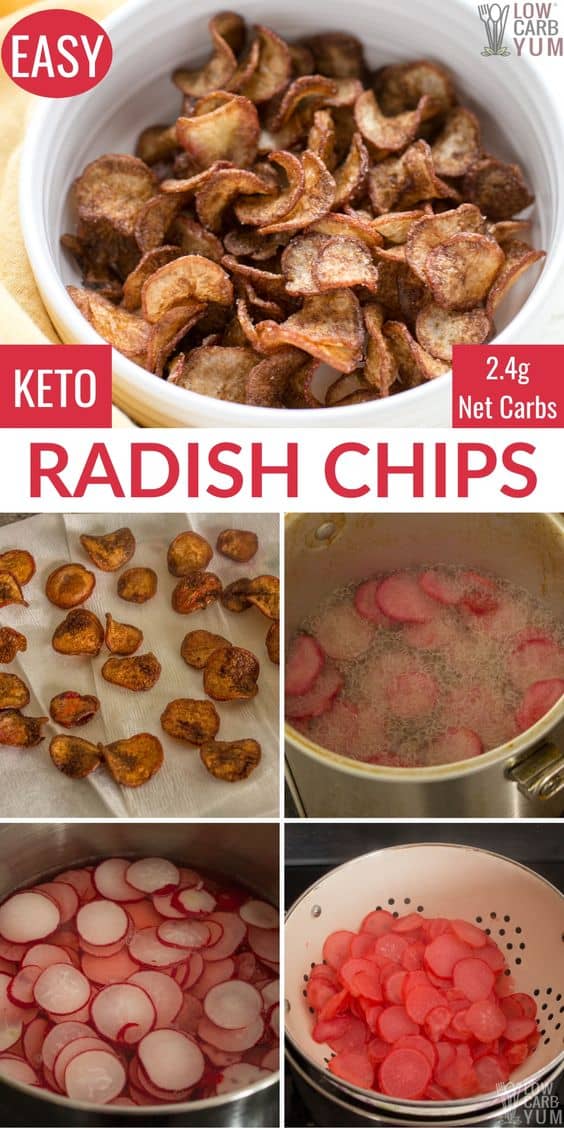 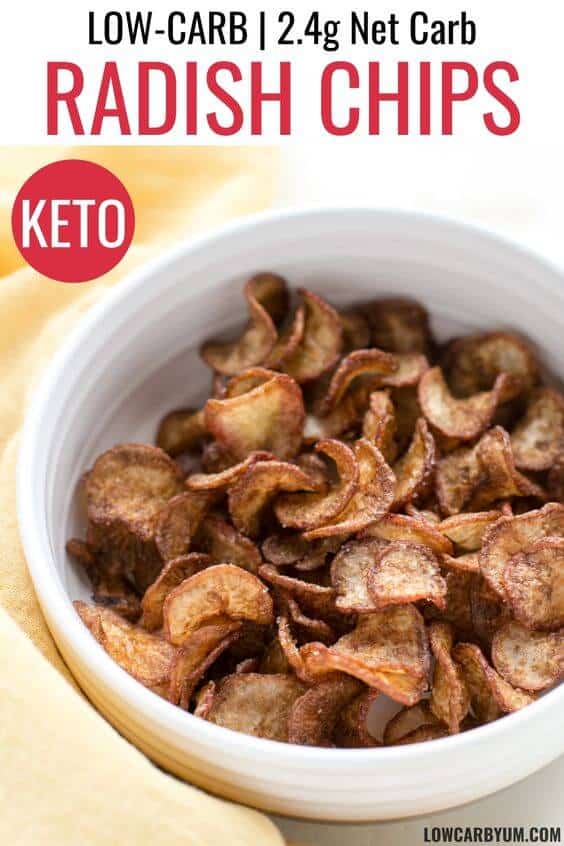 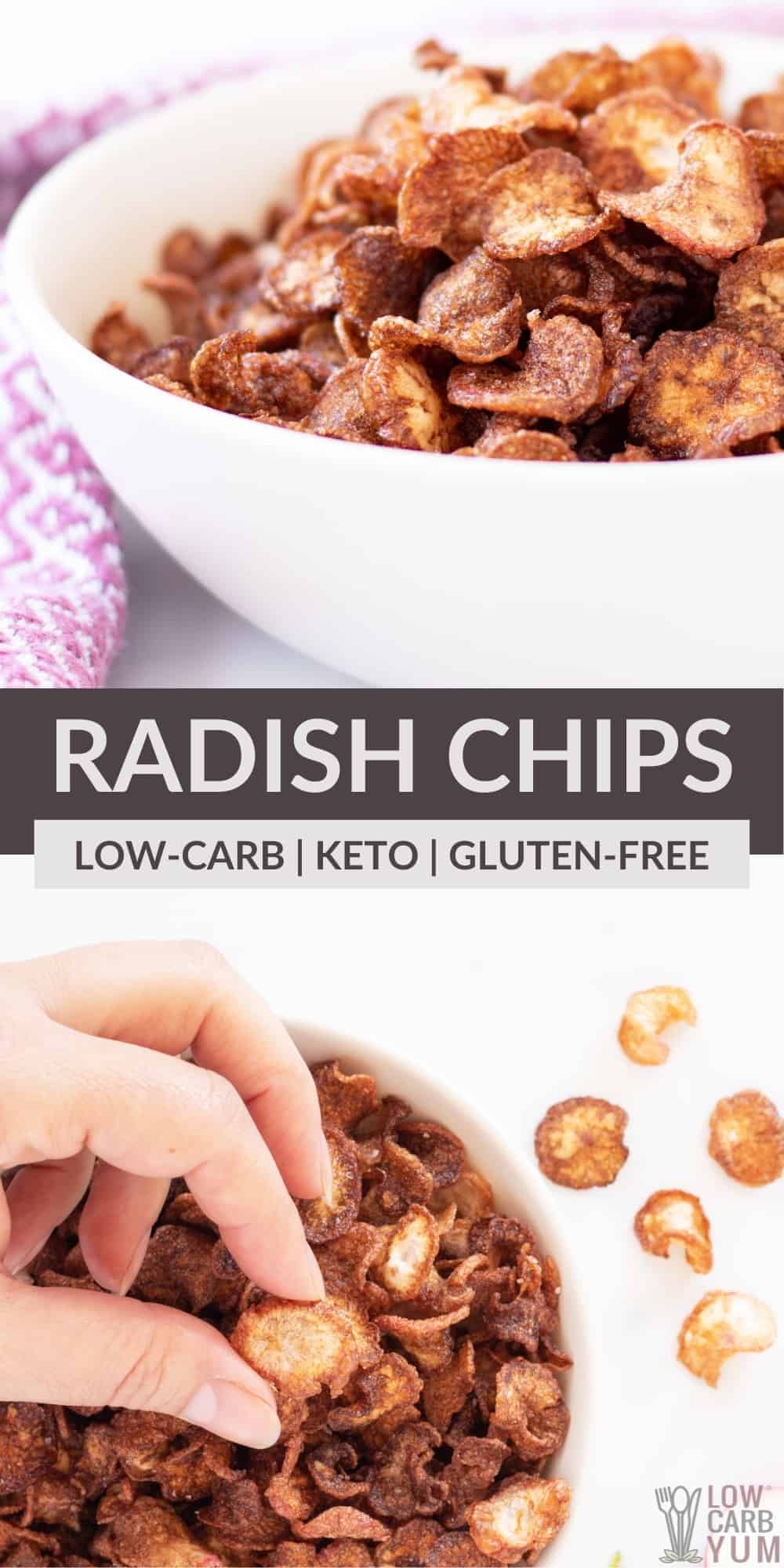 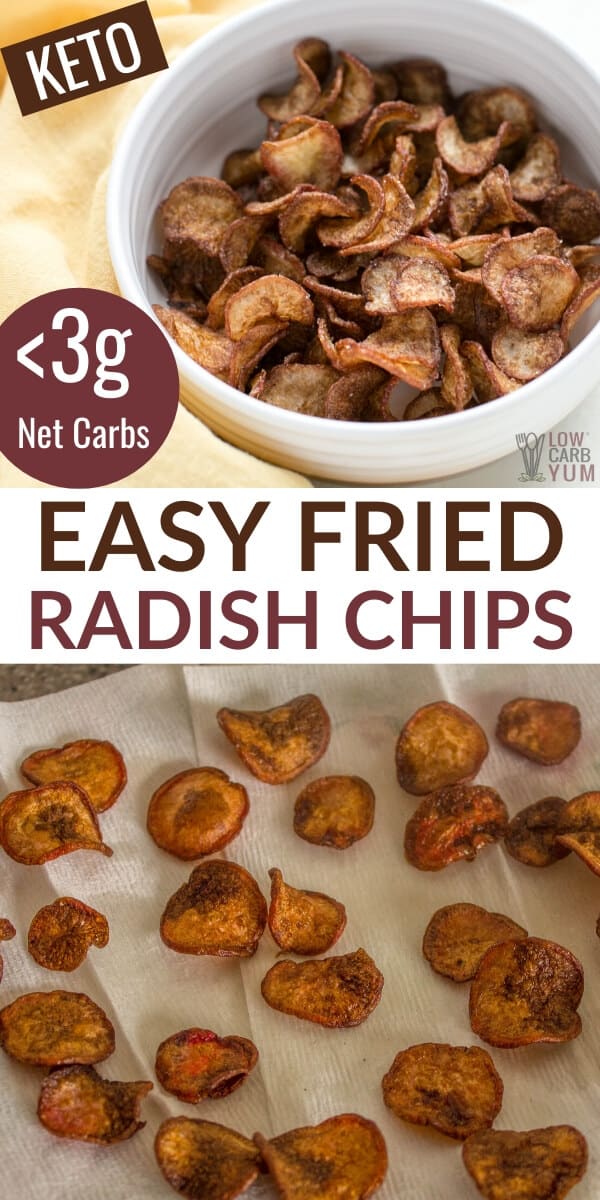 Radish chips are a great low carb alternative to potato chips. This recipe boils thin slices of radishes to soften and then deep fries them until golden.

I was never a big potato chip eater, but sometimes I crave something crisp and salty that isn't a pork rind. I used to love vegetable chips, especially sweet potato ones, but the carbs are just way too high.

I've seen that some people fry sliced radishes into chips so I thought I'd give these radish chips a try. There are many methods for making radish chips.

Before making the chips, you should cook the radishes until they become soft. Some recipes soften the slices in the microwave, others boil them.

However, I've seen recipes where you cut the radishes and let the moisture soak out for a couple hours. Then, you need to bake, dehydrate, or fry the chips to get them crunchy.

I boiled my slices and then deep fried them. They came out pretty good. Next time, I may try the dehydrator.

I used a one pound bag of radishes that were already washed so I just had to cut them up with a slicer. I've got an old Pampered Chef mandolin type slicer.

It works okay, but I'd really like to get something better and more industrial. The plastic is not the greatest and mine is already cracked.

My next slicer will likely be stainless steel. I should probably add that I sliced my thumb pretty good on the corner of the bad while moving the slicer out of my way after cutting the radishes. Totally my fault though, I wasn't really paying attention to what I was doing. So, be careful using these things.

I was only able to find a bag of radishes so I couldn't pick the size. There were a few small ones in the bag, but most were medium-sized.

The small ones were a little harder to slice and I made sure to use the finger protector to hold them during slicing (this didn't save my thumb later which caught the corner of the blade after I was done).

I boiled the radishes in white vinegar to see if they would pick up the flavor of the vinegar. The vinegar smell was very strong while boiling and nearly eye burning so I don't recommend doing this. And, the chips did not have much of a vinegar taste in the end so not worth the hassle.

The radish slices were boiled until somewhat translucent with lightened skins. This took about 5 minutes. Maybe I should have tried boiling in regular water and soaking the cooked sliced in vinegar before frying. I was really hoping for more of a salt and vinegar flavored chip.

I ended up frying the radish slices for almost ten minutes. They looked like they were almost burnt when I took them out, but they didn't taste burnt. Most of the chips curled up similar to potato chips.

Although I really enjoyed the taste of these mini chips, I may work on the preparation to see if I can get a chip with more vinegar flavor. I'm thinking I can soak the slices in a salt and vinegar solution and then dehydrate them.

I don't really like dealing with the grease of frying which is why I cook a lot of "fried" type foods in the oven. Even bacon cooks much better in the oven for me and doesn't make a mess in the kitchen when it's baked on foil lined pans.

If you have a great method for making radish chips, I'd love to hear about it in the comments. Although they could likely be baked similar to zucchini chips, they wouldn't have the same deep fried taste. 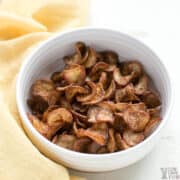 Radish  chips can be baked in the oven if you'd rather not deep fry them. To bake, pat them dry with paper towels after boiling and draining, then bake at 350°F until they become brown and crisp. It's best to cut the radishes very thin.