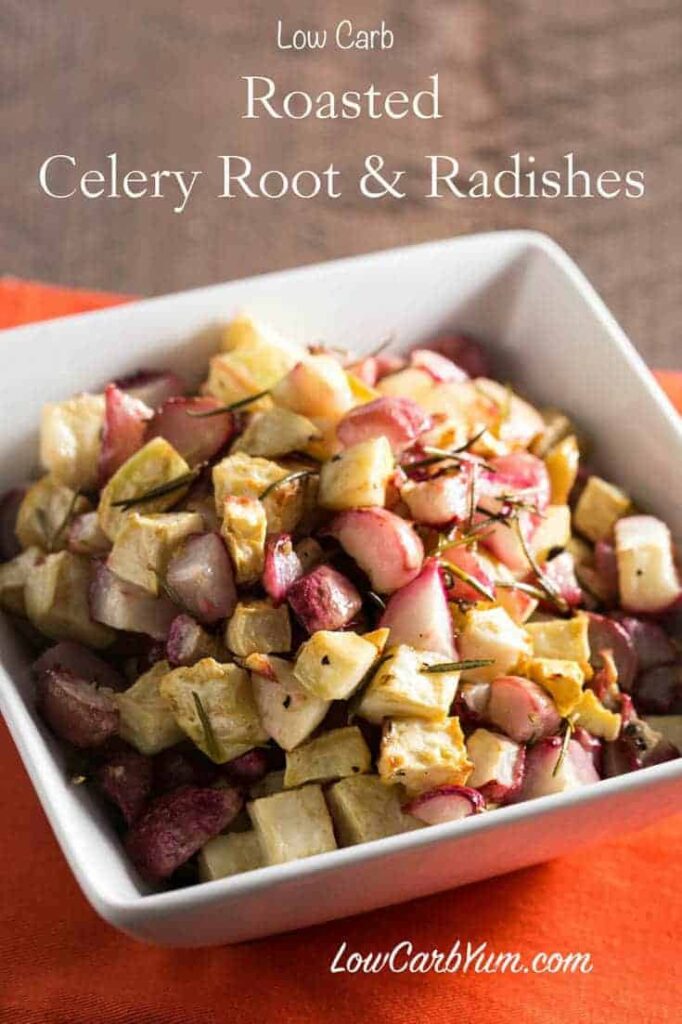 Have you tried celeriac? This low carb vegetable is also known as celery root. Roasted celery root and radishes is a great potato-like side dish.

I discovered a new vegetable last week. I've been seeing several recipes using celery root and I was curious to try this low carb vegetable.

This ugly looking veggie is known by several names. I've heard it called celeriac, turnip-rooted celery, and knob celery. It's the root of a variety of celery grown just for it's big bulb-like root.

I have probably seen celery root in the produce section of the grocery store, but had no idea it was a great low carb alternative to potatoes. And, it's not a very nice looking vegetable. In fact, it looks rather strange. However, I was willing to give it a try after hearing great things about this odd vegetable.

The smaller sized roots are supposed to be the best, so I grabbed one a little larger than a softball. I forgot to weigh it, but I'd say it was probably around a pound and a half.

You lose a lot of the root when you peel it. I cut off the dangly roots on the bottom and used a paring knife to peel the outer skin off.

Once celery root is cut and exposed to the air, it can turn brown similar to apples and potatoes. I made sure to have a large bowl of water with a touch of lemon juice to keep the chopped celeriac from turning brown.

Radishes are another yummy low carb vegetable that can be used in place of potatoes. I've read that they turn a bit sweet when roasted so I thought I'd mix them in with the celery root pieces.

I used just enough olive oil to coat the pieces well. Then sprinkled on some seasoning. You can use whatever seasoning you like. Fresh rosemary is what I chose along with some salt and pepper. A little garlic is always nice, but I left it out this time.

The vegetables pieces did shrink up as they baked. I had them in the oven for just over an hour. They were nice and tender and had begun to brown.

The roasted celery root was fantastic and the radishes did add a touch of sweetness similar to what carrots would do. It makes a tasty dish to serve along with a grilled steak.

I can see how celeriac could be sliced and baked into french fries or chips. I certainly need to experiment more with celery root. It is a bit higher in carbs than other low carb vegetables, but I think it's a healthy side that can be enjoyed in moderation.

This is a simple dish that can be enjoyed at any meal, yet it's elegant enough to serve during holidays and other special dinners. I doubt most of my extended family has tried this so I'm going to have to make it the next time we get together if the celery root is in season.

I still haven't found jicama in the grocery stores, but I've been told that it is available in at least one of the local markets. I keep my eyes out for it.

I was told it's usually in with the turnips and sometimes you have to ask for it as they sometimes keep it in the back. I'm not sure why they would do that. Maybe they are hiding it for all the "special" customers.

Need more potato-like side dishes? Here's a few of my favorites: 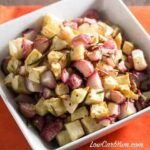