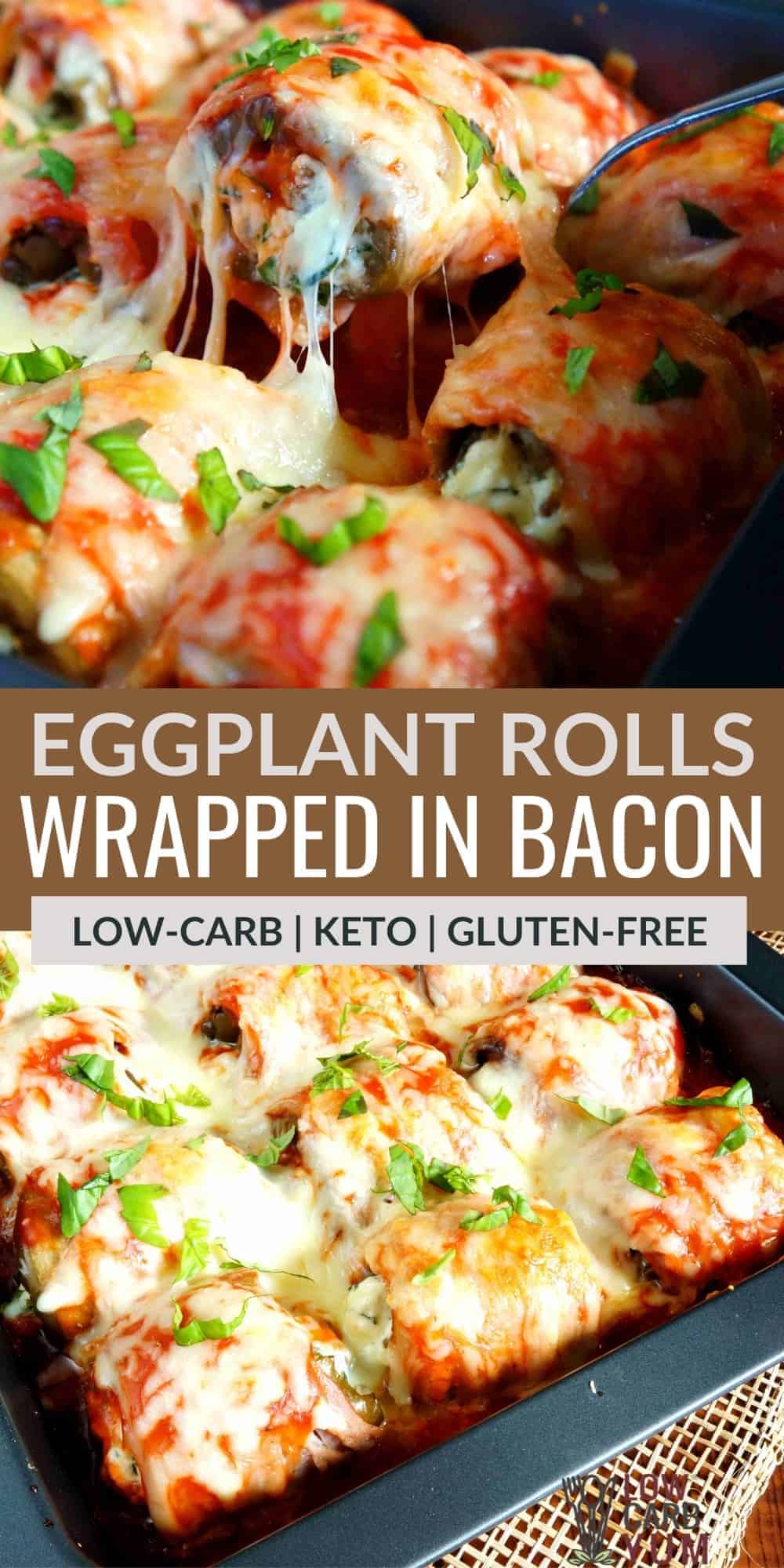 Delicious stuffed eggplant rolls with ground meat, wrapped in bacon, and topped with tomatoes and cheese. A perfect dish to feed a crowd!

Vegetables are a wonderful alternative to bread and pasta. One of my favorite veggies to use are eggplants because I find they are so versatile.

Rather than use pasta for things like lasagna and ravioli, many are now using thinly sliced vegetables. That's why keto eggplant lasagna has become so popular. Another popular thing to do is wrap the slices around a filling similar to stuffed shells.

A few weeks ago, I asked a friend of mine to help me create a recipe for stuffed eggplant rolls. The inspiration for the recipe came from a post at Inside The Rustic Kitchen for eggplant roll-ups with spinach and ricotta.

There were a number of modifications made to the original eggplant rolls recipe. Bacon was added as a wrap and the filling was enhanced with ground meat, basil and other spices. And, rather than using the standard ricotta cheese, cream cheese was used in its place.

The addition of meat really makes the dish a filling meal. In fact, a single roll is really satisfying. So, this dish can serve a number of people.

This recipe yielded a total of 16 rolls. And, all the rolls fit into a single 9x13-inch baking pan. There was even enough room for two more stuffed eggplant rolls.

If you are looking for a more traditional stuffing, you can certainly use ricotta or cottage cheese in place of the cream cheese. However, I think the cream cheese goes well with the beef.

I really like the addition of bacon. Although you could leave it out, I think it really ups the flavor and keeps the eggplant slices moist with added fat during baking.

The stuffed eggplant rolls are topped with canned tomato sauce. No sweetener was added to the sauce, but you could add in a touch of stevia if you'd like.

Most commercial sauces do add a touch of sugar to enhance the flavor. But, I prefer not to add any sweetener. After years of following a low carb diet, I don't care so much for sweetness.

Nothing is better than melted gooey cheese on top. In fact, it could just be the best part of the dish.

Rather than stick to just the traditional mozzarella cheese topping, a bit of cheddar is added. The cheddar adds in a little zing that is very subtle.

If you love Italian style dishes, you are going to love these yummy stuffed eggplant rolls. And, the recipe comes together easily. You can even make it ahead bake just before serving.

And, if you aren't a fan of eggplant, you could sub in another vegetable. Zucchini or summer squash could be used as the wrap instead. I've use both of them in similar recipes.

But, if you are an eggplant lover like me, you'll want to check out some of my other recipes using this fantastic garden veggie. Just take a look at the burger and parmesan recipes. 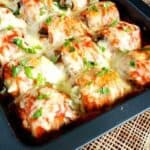 Leftovers can be reheated in the oven for 5 to 8 minutes.