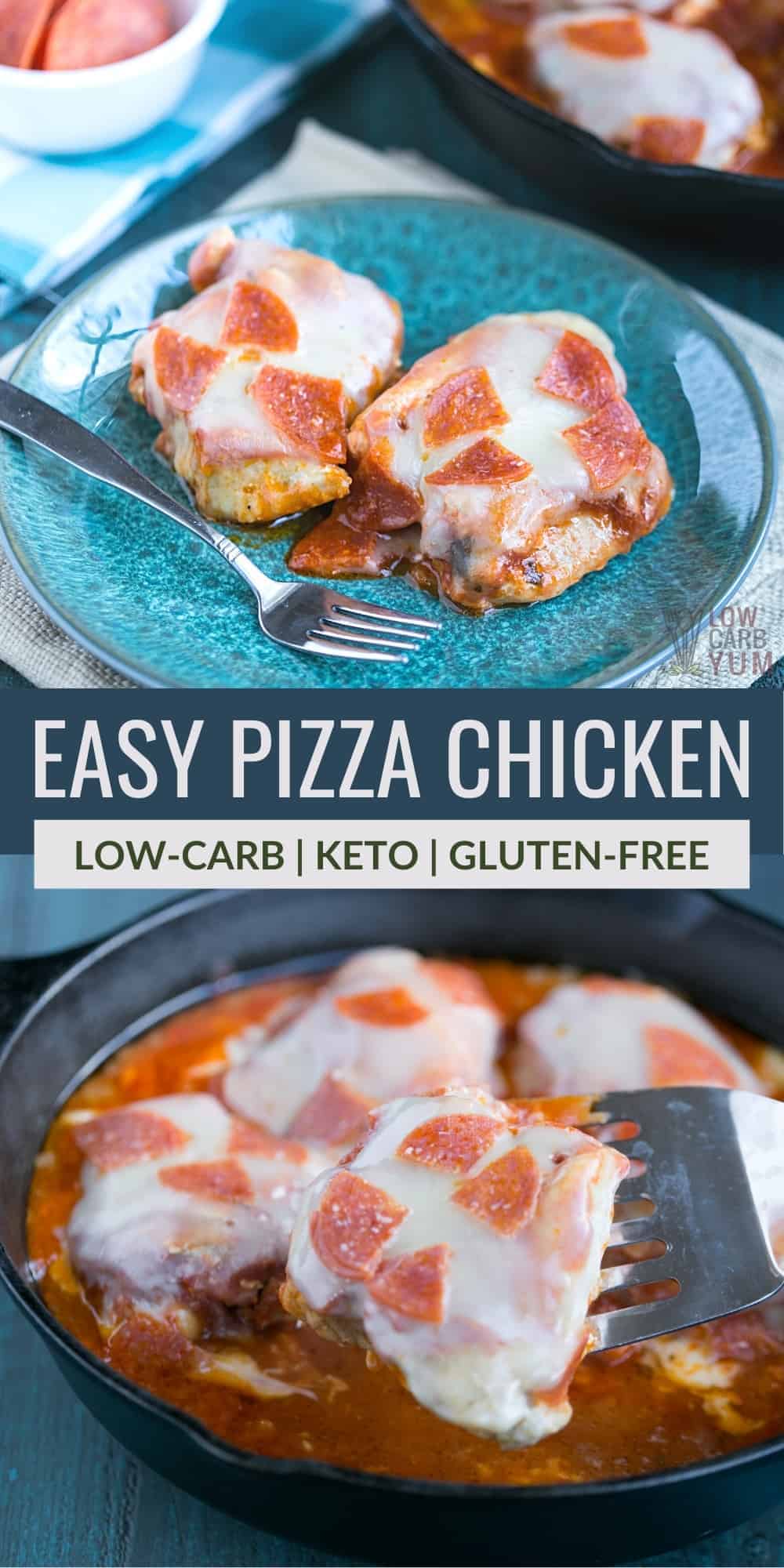 I was looking for an easy lunch recipe a few days ago. And, I wanted to have a little leftover to bring into work for an evening shift dinner.

There just happened to be a package of skinless boneless chicken thawing in the fridge. I also found a half used jar of marinara sauce hiding in a produce drawer.

These two ingredients sitting in the fridge gave me the idea to make a low carb pizza chicken recipe. Now, I've seen a baked recipe at Kalyn's Kitchen, but I didn't feel like turning the oven on.

I opted to make my chicken dish on the stove in a skillet rather than baking in the oven. And, it was super quick and easy to throw together at the last minute.

Thankfully, I had some sliced mozzarella cheese and pepperoni slices stored in the refrigerator. So, pepperoni low carb pizza chicken it was going to be.

This is a super simple chicken dish. All you have to do is fry the chicken in a bit of oil. I seasoned it first with a little salt and pepper and then added in minced garlic.

Once the chicken was browned, I added in the marinara sauce. I let that heat a bit, then added in the cheese and pepperoni. To get the cheese to melt, I covered and simmered.

I thought about browning up the cheese under the oven broiler. My original intent was to make a low carb pizza chicken on the stove. So, I opted not to brown the cheese in the oven.

If you like the crusty browned cheese on top, feel free to put the dish under the broiler for a minute or two. Of course, you'll need to make sure you used an oven proof skillet like one made of cast iron.

I'm always looking for easy family meals to make on busy weeknights. So, this simple chicken dish is getting added to my regular meal rotation.

Another one of my regular chicken dinners is the gluten free Shake and Bake Chicken made with almond flour. We rarely have leftovers of that yummy baked chicken.

This low carb chicken pizza reminds me of another recipe I'm hoping to make soon. You can actually make a pizza crust out of chicken meat. And, there's even a frozen pizza made by Real Good Pizza that uses a chicken crust.

Chicken meat, especially the white breast meat is very bland. So, it's something that can be used in a variety of recipes where a stronger flavor wouldn't work so well.

I even knew a guy who was making chicken chips by frying up thinly sliced pieces of breast meat. I've been meaning to try that and see how it comes out.

Want some more yummy low carb chicken recipes? Check out the collection I put together for Community Table or try an easy stuffed chicken Florentine recipe.

A simple chicken stuffed avocado recipe is another quick and easy dinner idea to make on busy nights. It's perfect for using up pre-made shredded chicken! 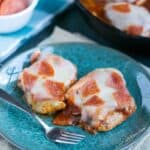