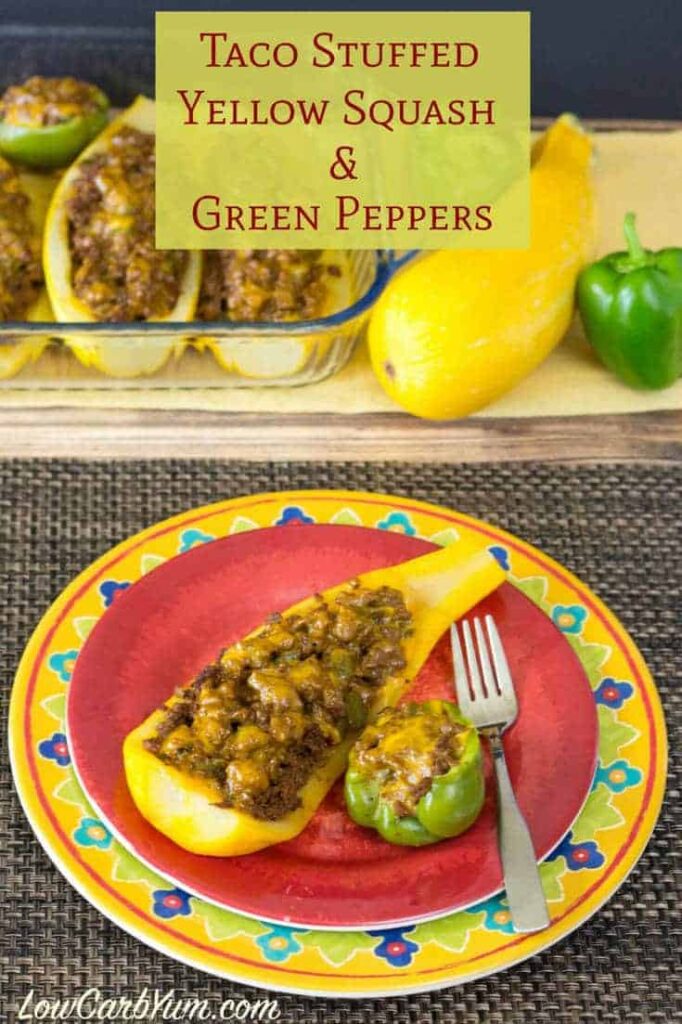 No need to bother with taco shells or tortillas with these delicious low carb taco stuffed yellow squash and peppers. Just stuff and bake. Use zucchini too!

Although I hate to post another yellow squash recipe, we have them coming out of our ears right now. So, I'm finding all kinds of ways to cook them.

I should be canning or freezing them, but I've been too busy to go food shopping so I'm living off garden vegetables and venison right now.

These taco stuffed yellow squash and peppers were a tasty way to use up our abundance of veggies and game meat.

Getting hit with tons of vegetables at once seems to be a problem for us every year. And, I'm not sure why we don't cut back on the garden.

I'm not a big gardener so my only job is to pick things as they ripen. I've been doing that every other day and I've been finding a few overgrown vegetables.

Although I try to look under all the leaves, I missed some cucumbers hiding out in the corner the other day that were enormous.

I grew up in a poor Navy family and I'm the youngest of six kids. My father retired from the military when I was seven.

I was lucky in that I had a pretty stable life compared to my older siblings who had to deal with all the relocations.

In Navy housing, I remember sharing a bedroom with my sister and two brothers as we got stuck in a three bedroom house and had to make do.

We settled in Connecticut because my older three siblings were in high school when my dad retired and my parents didn't want to make them move too far.

A small four bedroom house was all my parents could afford. I look at that house now and wonder how a family of eight could possibly live in it.

Although I can afford a lot more these days, I find that I often just "make do" with the things I have. It is part of my upbringing and it's hard to get rid of that.

Making taco stuffed yellow squash and peppers is an example of how I get by with what I have since I often just cook meals using ingredients I have.

I'm not big on planning and following a meal plan has never worked for me. I'd rather just stock up on basic ingredients and use my creativity.

It really bothers me when my kids say there isn't anything to eat when our house is full of food. They are just to lazy to get creative.

I mean we always have eggs as they are a staple so why not make a simple egg dish? It's probably laziness.

I'll admit that I'm not a very good cook, which is why I've always done more sweet than savory foods. I do like to cook and my skills have improved a lot over the years.

Following a low carb lifestyle has forced me to cook real whole foods rather than rely on ready made processed foods.

Tacos have always been a family favorite, but I don't have a lot of time for making my own low carb tortillas.

Using vegetables as shells for the meat in these taco stuffed yellow squash and peppers is simple way to lower carbs for this popular Mexican dish.

I normally top tacos with grated cheddar cheese, but I didn't want to spend the time grating up the block of cheese I had.

Since I had some sliced cheddar, I used that instead. It worked perfectly!

My son has been snacking on the tomatoes and I've been using the rest in salads.

The seasoning blend was just right and it was a delicious filling meal. It was definitely one way to get those extra squash eaten up quickly.

I also made a yellow squash cake and a zucchini squash tomato salad to get the other squash used up.

However, lately, it seems the summer squash are growing faster than I can cook them.

Need other easy ways to use those summer veggies? Here's a few more ideas: 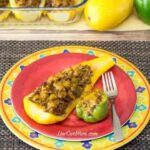