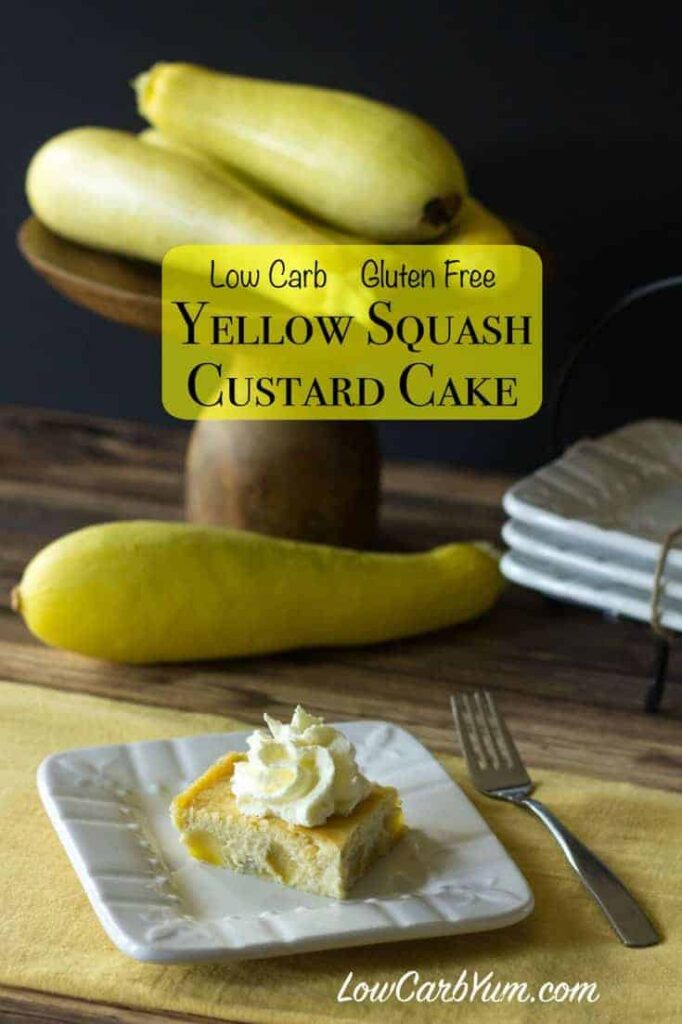 Summer squash can be used to make a sweet sugar free dessert. This low carb and gluten free yellow squash cake recipe has chunks of squash in a custard like cake.

Have you ever neglected your garden for a day and the next day have a few monster summer squash? I prefer my zucchini and yellow squash to be on the small size.

The squash are a lot less seedy when picked before they grow into a super size. This growth seems to happen overnight at times.

I had a very large yellow squash that needed to be cooked. I found a recipe for yellow squash dessert that calls for peeled and seeded squash so I knew it would be a perfect use for my monster sized squash.

It was fairly easy to adapt the recipe to make this low carb yellow squash cake recipe. The original recipe used evaporated milk which isn't very low in carbs so I replaced it with a can of coconut cream.

This isn't the first dessert I've made using yellow squash. I've also made a sweet bread and summer squash pie from this summer squash.

The taste of this yellow squash cake recipe tastes a lot like cassava cake to me which is one of my favorite Filipino desserts. Cassava cake usually contains coconut cream so that's may be why this squash cake tastes so much like it.

Next time, I may use cooked spiralized squash rather than cut so it resembles the grated cassava. And, the squash would cook faster if sprilized.

The large squash yielded about 2 cups of cubed pieces. As you can see in the photo, the seeds were large. I'd say the seeds in this yellow squash were almost the size of pumpkin seeds.

When the seeds are large, I find it best to pull them out because they can be tough. The skin can also be a bit thick so peeling and seeding the squash leaves just the tender flesh.

As suggested in the original recipe, I cooked the cut squash for about 20 minutes in boiling water. You also want to be sure to drain out most of the water after cooking. It's not a big deal to get every last drop, though.

The mixture is poured into a 9x13 inch baking pan. I used a rubber spatula to run along the top to make sure the squash pieces were distributed fairly evenly throughout the pan.

Although I hate turning on the oven in summer, this yellow squash custard cake dessert bakes up in about 25 minutes. It was worth the heat of the oven for this yummy dessert.

At the end of baking, the top will be browned and the cake should be set. It's kind of like a custard in that you want to make sure there isn't any jiggling going on.

You can easily get 20 pieces from this yellow squash cake recipe. But, I opted to cut them a little bigger which yielded 15 pieces.

It's best to serve this cake topped with whipped cream. If you are taking it to a party, a layer of low carb stabilized cream could be spread on top similar to a cream pie. 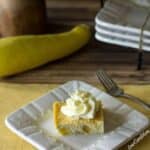