A yellow squash pie recipe that’s similar to a coconut custard pie. This yellow squash dessert pie with coconut is a sneaky way to get them eating a vegetable.

Although I have made a mock coconut custard pie with yellow summer squash, that recipe did not have any real coconut in it. I thought the pie would be better with some unsweetened coconut added instead of relying only on the extract for flavor. Therefore, I came up with a yellow squash pie with coconut recipe.

The coconut in the pie really adds a great flavor to the dessert. It’s a nice treat to make when you have a garden full of yellow summer squash.

The summer squash always grows well for us in our garden so I’m always trying to use it for more than just a steamed vegetable side dish for dinner. I like this squash coconut pie recipe a little better than the one I made previously because of the added pieces of coconut.

To get the best flavor, you really do have to add coconut. It’s just not the same relying solely on extract flavors.

And, the texture of yellow summer squash isn’t that close to coconut. However, I will admit that the original pie tasted much better than I thought it would.

How to make a yellow squash pie recipe with coconut

It’s super easy to make this squash coconut pie. And using a food processor or blender makes it even easier.

Grating the yellow squash a food processor is much faster than using a box grater. The recipe calls for three cups of grated squash which is about 2 medium yellow squash.

You need to drain the grated squash in a strainer to remove excess liquid. Otherwise, the pie will be very runny so it’s important not to skip this step.

The mixture is then poured into a standard 9.5-inch pie pan and topped with additional flaked coconut. Then you bake the pie in a 350°F oven for about 25 minutes or until custard sets.

For the fewest carbs, I recommend making a crustless summer squash pie. However, you can add a low carb pie crust if you’d like.

You can use an almond flour pie crust or a coconut flour pie crust. But if you want the best of both, try using the crust in my keto key lime pie which using a mix of flours.

How to Make a Mock Coconut Custard Pie

If you just have fresh squash without any dried coconut, you can still make the pie. But you’ll need some coconut extract.

My original recipe used about one and a half cups grated yellow squash. After draining the squash, it’s combined with the following ingredients in a blender or large bowl:

The mixture is then poured into a greased pie shell and baked at 350°F until the pie is set. It usually takes about 45 minutes to bake the pie.

How to serve a Squash Custard Pie

The pie is delicious as is. But you can top it off with some low carb whipped cream if you’d like.

This is a fantastic pie to add to your holiday dessert table and it’s simple enough for every day meals as well.

If you like to grow your own vegetable garden and have overproducing squash, definitely keep this low carb pie in mind. It’s a nice custard like sweet pie that sneaks in a little vegetable.

If you want to try another sweet recipe for summer squash, I have a few more good ones on the site. You may like my yellow squash cake recipe or yellow squash bread. 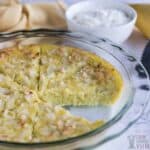 The grated squash doesn’t need to be squeezed of moisture completely, but you’ll want to let it drain in a strainer after grating. Any low carb pie crust can be added like the following:

© LowCarbYum.com
Unauthorized use of this material without written permission from Lisa MarcAurele is strictly prohibited unless for personal offline purposes.
Single photos may be used, provided that full credit is given to LowCarbYum.com along with a link back to the original content.
First Published: July 28, 2012…
Last Updated: September 5, 2019