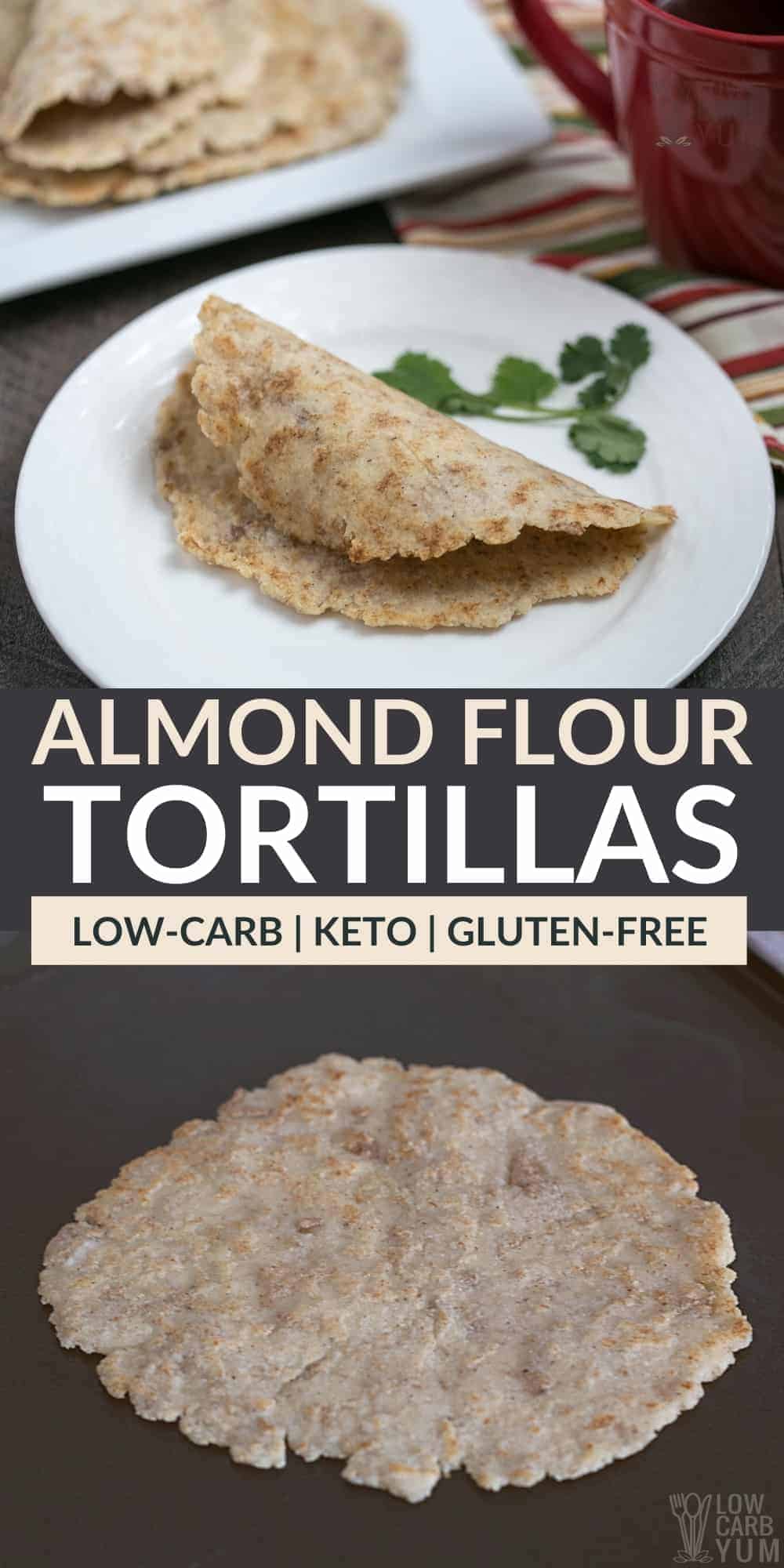 Are you looking for easy to make low carb tortillas? You’ll love the taste and texture of these almond flour tortillas for keto wraps.

I’ve been wanting to try making my own keto friendly tortillas for a long time. Because I want to use them for my low carb fajitas and Mexican chicken lasagna recipes.

When I first started on a low carb diet, I used to rely on packaged foods. One of the things I used to buy a lot of are the Mama Lupe low carb wraps.  They are low in carbs, but made with wheat and a lot of hard to pronounce ingredients.

I had some time this weekend to work on some almond flour tortillas. To get the right texture, I added in some psyllium which is also a wonderful egg replacer.

The great thing about psyllium is that all the carbs are fiber so you end up with zero net carbs. And, when you mix it with water, it forms a gel that can mimic gluten as well as eggs. So these low carb tortillas are not only gluten-free, but egg-free too!

It’s so easy to make your own low carb keto tortillas at home. For my egg-free recipe, I use the following ingredients:

As you can see, the low carb tortilla recipe uses wholesome ingredients including gluten-free flour. And with psyllium, there’s no need to add any xanthan gum or cream cheese.

The psyllium, almond flour, coconut flour, baking powder, and sea salt are whisked together first. Then hot water is added and the mixture is kneaded to form a dough. If needed, additional water is added.

I blended the ingredients by hand in a mixing bowl. However, next time I’ll use a food processor to get the psyllium mixed in better.

Next, the dough is divided into six equal pieces. Each piece is formed into a ball using your hands.

I rolled out each ball into a flat circle using a rolling pin. To prevent the dough from sticking to the pin, I put the dough between sheets of parchment paper. A tortilla maker can also be used to flatten each dough ball out.

The final step is to grill the tortillas on medium heat. You can use either a skillet or an electric griddle. This cooks and browns the sides of each tortilla.

How to Use Homemade Almond Flour Tortillas

With the amount of ingredients used, I got a half dozen six inch almond flour tortillas. It’s a great recipe to use for tacos and other Mexican dishes. But they work great as grain free keto wraps too.

These egg free tortillas kind of reminded me of a thin flat bread. So, they are perfect for making sandwich wraps to take for lunch. I’d like to try them in a low carb panini too.

You can even use them to make keto tortilla chips if you cut them in triangles and bake them up crisp.

There are so many things you can do with these yummy low carb tortillas. Here are a few of my other recipes that you may want to use them with:

I’m pretty excited to have this recipe for egg free almond flour tortillas. And I’ll be finding lots of ways to enjoy them.

With Cinco de Mayo just a couple weeks away, I need to spend a little time coming up with new low carb Mexican recipes. I’ve always loved enchiladas and chimichanga so maybe I’ll work on something like that.

Notes on the Recipe

I feel like I’m becoming an expert in low carb psyllium recipes. Having to eliminate chicken egg whites in my diet really pushed me to experiment with more egg free low carb recipes.

Although you can use chia seeds in place of eggs, psyllium doesn’t have the hard seed shells to deal with. I’m just amazed by how well it replaces wheat gluten and eggs.

If you can’t find psyllium, flax meal will also work in the recipe. But I think psyllium results in a better taste and texture.

You do need to be careful about fiber, though. I find if I eat too much, it causes gas and bloating. So, I’m trying to limit the amount I eat so I don’t overdo it.

The great thing about these egg free almond flour tortillas is that they don’t have any eggy taste. That’s because there are NO EGGS in the recipe.

Other keto wraps use a ton of eggs in the recipe so there is no way to hide that egg taste. I suppose you could cut back on the whole eggs and use egg whites.

Some of the popular brands of keto wraps include:

If you’ve been buying those pre-made low carb tortillas, I encourage you to give this recipe a try. You may even find that you like these homemade wraps even better.

What are your favorite things to do with tortillas? Do you make your own or buy pre-made ones?

To make homemade tortillas, it’s good to have the following items on hand:

Author: Lisa MarcAurele
4.5 from 36 votes
Are you looking for easy to make gluten free tortillas that are low in carbs? You’ll love the taste and texture of these almond flour tortillas and keto wraps.

Adapted from a paleo tortilla recipe found at Cassidy’s Craveable Creations About 2 grams net carbs per tortilla.  You can grind up the whole psyllium husks if desired, but I find it unnecessary. I prefer making these ahead and storing them in the refrigerator. They become more pliable when cooled completely. They can also be frozen for longer storage and then thawed in the refrigerator. Recipe has been modified based on comments received to improve success.