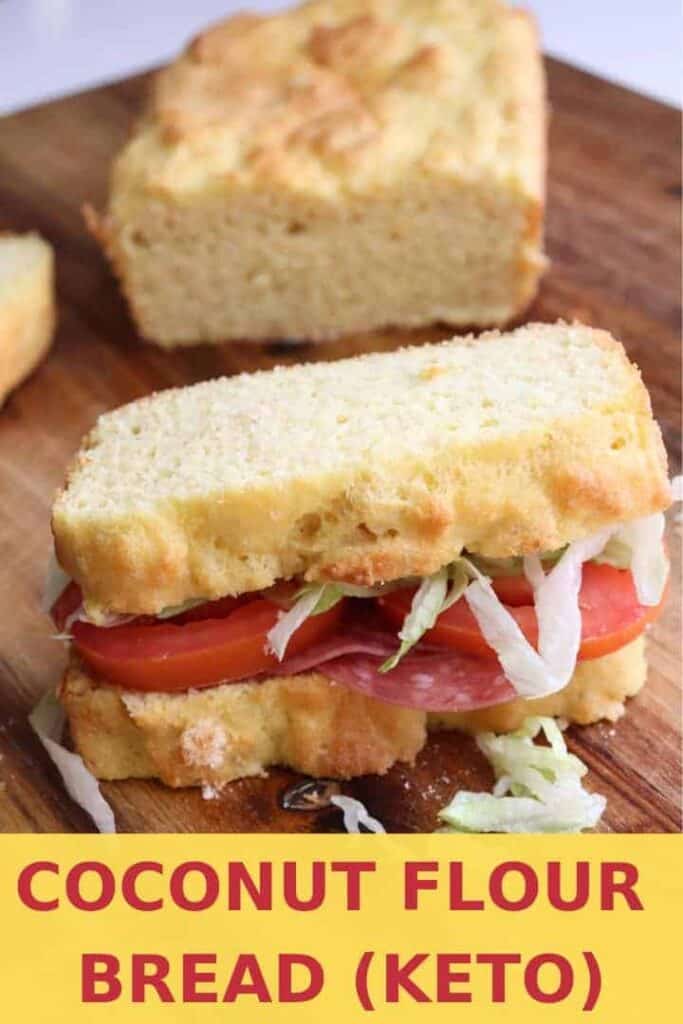 It’s really hard to give up bread and sandwiches with starting keto. That’s why you’ll want to try various low carb bread recipes to find one that works for you. For a tried and true recipe, I recommend the popular Soul Bread that was developed by a group of low carbers.

However, if you’re like me, you may be looking for a keto bread that’s also dairy-free. Unfortunately, Soul Bread relies on cream cheese, butter, and whey protein. Psyllium bread recipes typically contain no dairy, but finding psyllium can sometimes be a challenge.

Whether you are looking for a gluten-free recipe or want a low carb option, coconut flour bread is a perfect choice. This bread tastes great, has no added preservatives and additives and is easy to make. Plus, it uses ingredients that are typically easy to find.

No matter the reason you are giving up traditional bread, it isn’t until you can’t have it that you discover how many things you want bread for. Bread is the base for simple meal ideas, for a side dish, as toppings like bread crumbs and the base for some of our favorite dinner traditions, like turkey and stuffing.

With my coconut flour loaf, you can enjoy all of these things again without the worry. And it’s a great alternative to almond flour bread for those with nut allergy!

Ready to make your own low carb sandwich bread? You’ll need the following ingredients for the recipe:

The recipe does call for six eggs, but the bread doesn’t have a strong eggy taste. When baking with coconut flour, you need to use plenty of eggs and liquid. That’s because the flour is very absorbent and without the extra eggs and liquid, baked goods would be very dry.

How to Make Bread with Coconut Flour

The wet ingredients (eggs, coconut oil, and almond milk) are blended together first in a large bowl. Then the dry ingredients (coconut flour, baking powder, xanthan gum, salt) are stirred in. As the coconut flour absorbs the liquid, the mixture should begin to thicken.

When the mixture is thickened, it’s spread into a 9x5-inch loaf pan. It’s best to grease the pan well or line it with parchment paper. The last thing you want is to have the coconut flour sandwich bread stick to the pan!

It takes about 35-45 minutes at 350°F for the bread to bake. You know it’s done when the top is golden and a toothpick inserted near the center comes out clean.

I like to place the hot loaf pan on a cooling rack for about 10 to 15 minutes before removing the bread. And I find that running a knife along the edge between the bread and pan helps it come out better. If using a parchment paper liner, the bread will just lift right out with the paper.

What is Coconut Flour

The base of this keto bread recipe is coconut flour. It replaces the wheat flour that’s found in traditional bread.

Once dried, the coconut is ground into a powder that creates the flour. However, if you were to grind up regular unsweetened shredded coconut, it wouldn’t be the same. That’s because the coconut meat is also defatted when used to make flour.

Coconut flour can be used in many ways. Since it is gluten free, low carb, high in fiber and low in calories, it makes a great alternative to wheat bread for those on a keto diet.

How Long Will the Bread Stay Fresh

While coconut flour bread is a great choice for bread, it doesn't have the additives and preservatives that come with traditional store-bought bread. It will not last as long as store bought bread. It will stay fresh for a few days, up to a week when stored in an airtight container. Store at room temperature.

Low carb coconut flour bread is a great choice for healthier sandwiches. However, it doesn’t have the additives and preservatives that come with traditional store-bought bread. Therefore, it won’t last as long as store bought bread.

It will stay fresh for a few days at room temperature. And it should last at least a week when stored in an airtight container in the refrigerator. The bread can also be sliced and frozen in single servings so you can enjoy it as you need it.

This is a fantastic every day bread for making sandwiches and low carb French toast. But you may want to change things up and experiment with various add-ins. This coconut flour bread recipe can be used as a base for other bread.

Here’s a few ideas to get you started:

I personally think this recipe is a great base for a low carb banana bread. So I experimented with it to make a banana bread made with coconut flour. That recipe uses a flavor extract to avoid adding sugar with a real banana.

Here’s a few of my other bread recipes that are also perfect for making sandwiches:

There’s also a wonderful egg-free bread over at Sweet As Honey.

To make this easy low carb bread, you’ll want to have the following items available:

If you can't find xanthan gum or prefer not to use it, you can use about one tablespoon of any of the following instead: Variations to try: