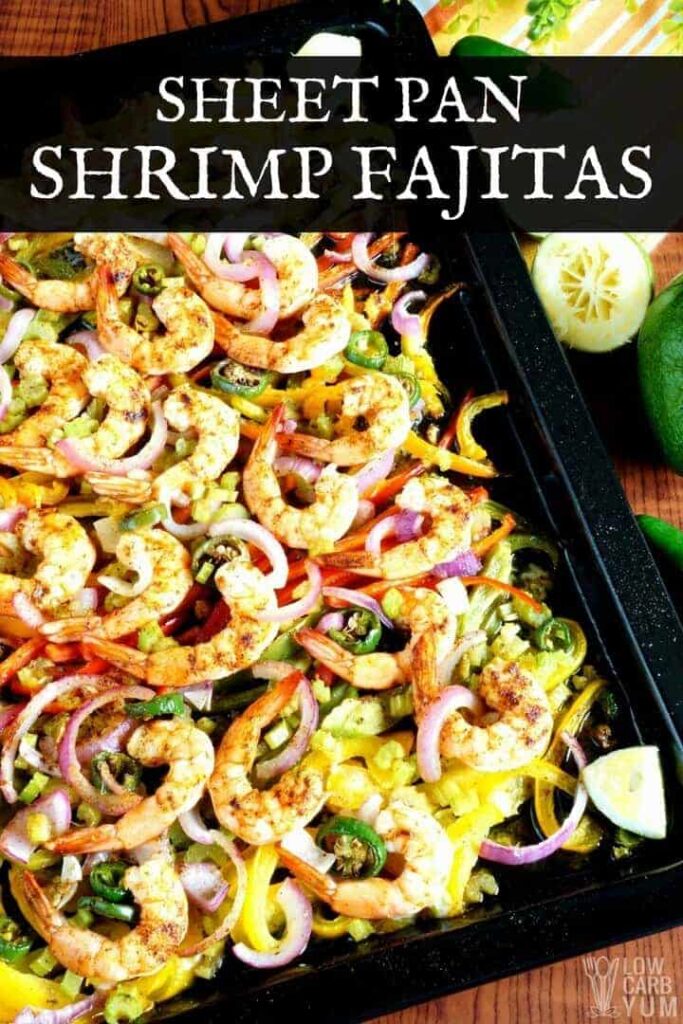 The easiest way to make low carb fajitas is baking the meat and vegetables on a sheet pan. Here's a simple recipe for shrimp fajitas.

I've been in a seafood mood lately. First it was the baked sea scallops, then the tilapia salad. This week, I'm bringing you some shrimp fajitas because I love low carb Mexican recipes.

You may be tempted to enjoy the shrimp low carb fajitas without a tortilla to cut carbs. But, there are many low carb tortillas that you can make or buy.

I came up with an egg free recipe for homemade tortillas made with psyllium because I'm sensitive to egg whites. Most of the low carb tortillas you'll find in supermarkets contain wheat so you'll want to watch out for that if you're gluten-free.

You can also serve up this shrimp low carb fajitas on lettuce wraps. Those work really well too as you just want something to hold the mix to eat with your hands.

Of course, the sheet pan fajita mix can also be eaten with a fork. But, I like to use either tortillas or lettuce for serving.

For added healthy fat, I serve the fajitas with avocado and sour cream. You can add in a salsa as well. My favorite is a homemade cucumber salsa as it's very low carb.

I used cocktail shrimp for these low carb fajitas, but you may want to use ones with the tail end removed if you don't eat them. That will make it much easier to eat.

Most restaurants leave the tail ends on as it does make for a prettier presentation and the pieces look bigger. However, most people, including myself, don't eat them.

What do you think? Are you annoyed when the last piece of shell are left on shrimp when you order a dish at a restaurant?

The reasons I left the end piece on the shrimp for these sheet pan low carb fajitas is because it looks nicer in the photos. If I weren't looking for the best presentation, I would have taken all the end pieces off before baking.

However, there are times when I cook the full shrimp. When making traditional sinigang na hipon, a shrimp based Filipino soup, I keep the fresh shrimp intact. Why? That's the way it's made in the Philippines!

I do find it a bit tedious to have to pull them off after cooking. And, it's sometimes tough to get the meat out if it sticks in the end.

I got about eight servings from the recipe and that worked out to be roughly three shrimp per person. You can eat double that and adjust for a large serving.

It's so easy to make fajitas in a sheet pan that I don't know if I'll go back to the skillet method. For another super simple seafood recipe, check out my crockpot shrimp scampi. 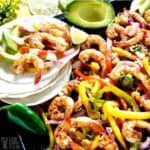 An appetizer serving is 1 fajita which includes about 3 shrimp, a meal size would be 2 fajitas.

© LowCarbYum.com
Unauthorized use of this material without written permission from Lisa MarcAurele is strictly prohibited unless for personal offline purposes.
Single photos may be used, provided that full credit is given to LowCarbYum.com along with a link back to the original content.
« Keto Chocolate Cheesecake Baked in Pressure Cooker
Low Carb Lettuce Wraps with Turkey & Roasted Peppers »