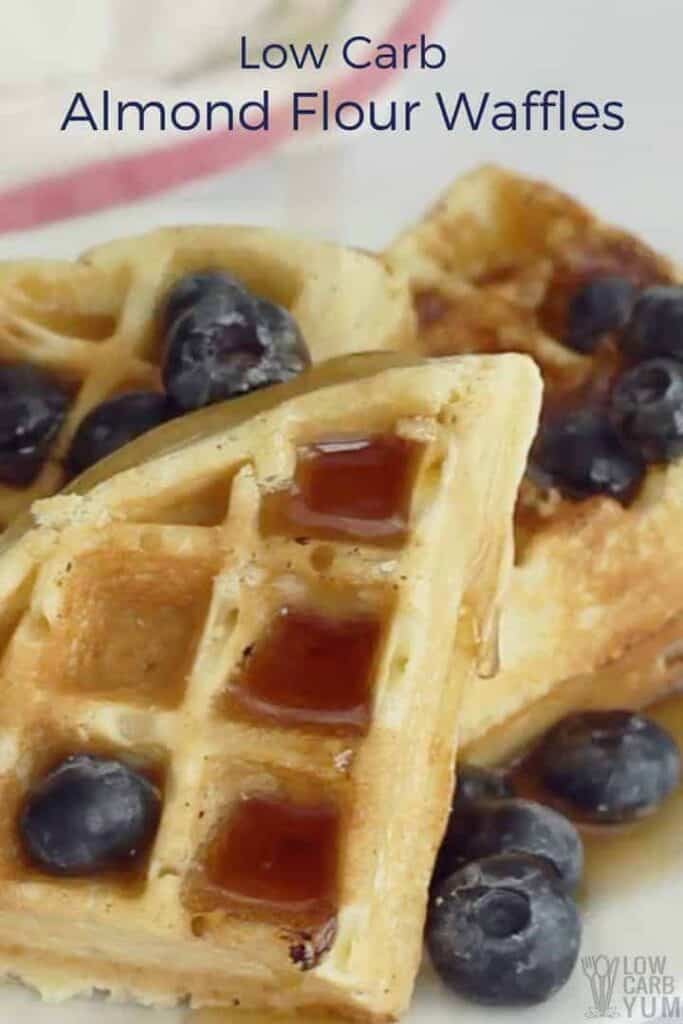 Keto waffles can be just as good or better than wheat flour ones. These delicious low carb almond flour waffles can be made ahead and frozen for quick and easy breakfast.

For this recipe, I modified a standard waffle recipe to use almond flour instead of regular wheat flour. The recipe came from an old Better Homes and Garden cookbook.

I also have a coconut flour waffles recipe if you don't have almond flour. But you do need more eggs when using coconut flour.

Adapting the Recipe for Keto Waffles

Sometimes modifying a standard recipe works out well without having to make too many other changes. And I didn't change much to create these almond flour waffles from a regular cookbook recipe.

However, I ended up increasing the number of eggs slightly. The additional egg helps prevent crumbling when using ground almonds instead of regular flour. I also find that adding a little xanthan gum provides a little elasticity like gluten.

But the xanthan gum isn't necessary. It just gives these low carb waffles a texture that's more like regular wheat flour ones with gluten.

The original recipe called for milk so I replace it with lower carb heavy cream. The heavy cream can be diluted with water to lower the carbs and calories if desired.

You can also use low carb almond or coconut milk instead of the heavy cream. However, the batter will tend to be thinner so  you'll want to use less.

Most of the carbs in these almond flour waffles come from the ground nuts. It's a lot of nuts if you were to eat a full Belgium waffle size.

So make sure you don't eat a supersized portion. I like to add a small waffle as a side to bacon and eggs. It's kind of like having a little dessert at breakfast.

How to Serve Low Carb Waffles

Keto waffles are the perfect weekend low carb breakfast idea. But they are also great for a little morning or afternoon snack. You can serve them the traditional way with a little butter and low-carb maple syrup just like almond flour pancakes.

I also like to serve them with fresh berries and a little whipped cream on top. This is one of my favorite after work snacks. They are a real treat topped with fruit and whipped cream.

Since they are stored in the refrigerator, I just pop one in the microwave or toaster to heat it up. I find the toaster oven makes them crisper than the microwave.

A large batch of these almond waffles can be made ahead to freezer for later. All you'd have to do is reheat them in the microwave or toaster oven straight from the freezer.

If you are allergic to nuts, you can try adding sunflower seed meal to the waffle batter instead. I also found a great low carb waffle recipe at Sugar Free Londoner using a blend of almond butter and coconut flour.

Although almond butter has nuts, it can easily be replaced with sunflower seed butter for nut-free waffles. There's also the option to use sesame seed flour as well.

For more ways to change up your morning meal, take a look at these keto breakfast ideas. I've also got a great recipe for low carb pancakes if you prefer those over waffles. Or try making French toast with my coconut flour bread recipe. Chaffles are another great option!

As you can see, there's a lot of options when it comes to breakfast. Keto smoothies are another popular way to start the day, particularly if you're taking breakfast to go.

A good non-stick waffle iron is key to making great almond flour waffles. And, you'll want to make sure they are fully cooked before trying to take them out.

I've found that watching the steam coming out of the waffle iron is a good way to test for doneness. Typically, when the steam slows down is when the waffles are done.

Also, make sure you don't over mix the batter. I find using a rubber spatula to gently mix the ingredients until the batter is smooth.

Another common mistake is to lift the lid of the waffle maker too early. This can cause the waffle to break in the middle with each half stuck on the waffle plates.

Ready to make these delicious waffles? Be sure to follow the tips above.

And check out the video below to see how easy it is to make the perfect low carb waffles... 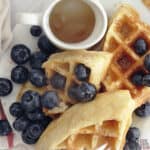 To clarify, one serving is ¼ of a full waffle that's been divided into 4 wedges. So 2 wedges has approximately 6g net carbs. Be sure to use a non-stick waffle iron and keep an eye on the steaming to determine when it's done. The steaming will slow down as it cooks so wait until that happens before opening the waffle iron.