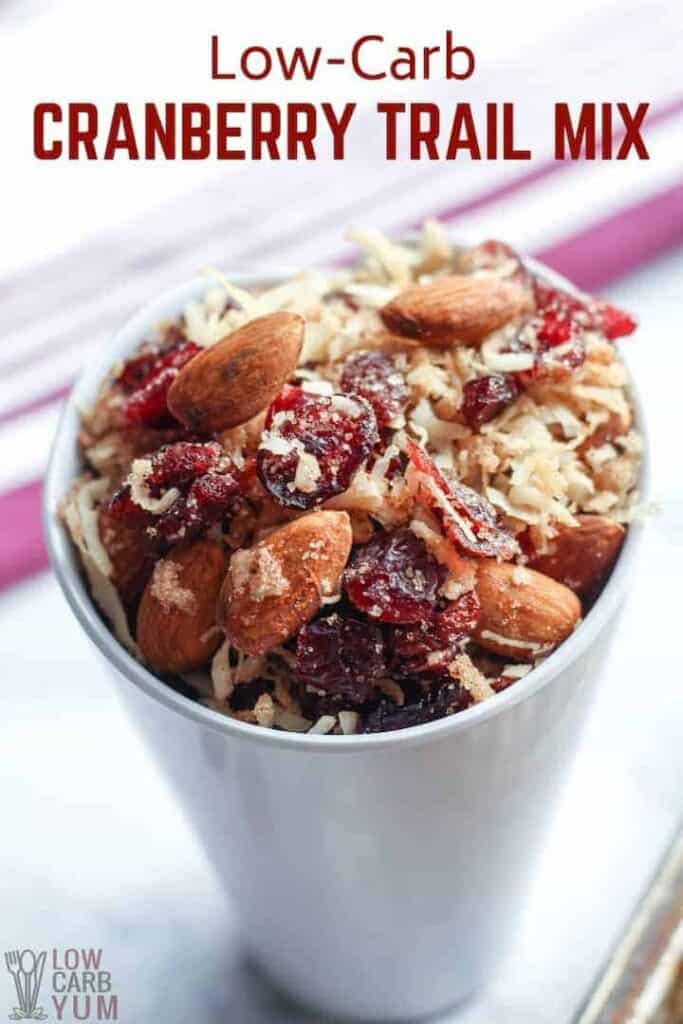 The stevia sweetened dried cranberries I made last week were so delicious that they were devoured by my family in days. So I made another batch because I wanted to use some in a new recipe.

Since cranberries do contain natural sugars, I thought it would be good to mix them with nuts or seeds for a snack mix. But I didn't have a lot to select from in the pantry.

In addition to the dried cranberries, I had some raw shelled almonds and a couple bags of unsweetened dried coconut. So I decided to combine those ingredients to make a low carb trail mix.

Most pre-made trail mixes contain a combination of dried fruit and nuts. Unfortunately, most of the dried fruit is either naturally high in sugar like raisins or has sugar added. Some mixes include chocolate or candy as well.

There aren't a lot of choices when it comes to making a keto trail mix. That's why it's best to make your own. And if you like a sweet blend, you'll want to use low carb sweeteners.

How to sweeten a low carb trail mix

I have been experimenting with a new stevia and erythritol sweetener. It's twice as sweet as sugar. So, you just need to put in half the amount of sugar called for in a recipe for substituting.

There is a good amount of erythritol in the blend and it tastes very close to sugar. The stevia is a very high quality without bitterness or aftertaste. I decided to use it to add a sweet coating to my cranberry low carb trail mix.

What's the name of the sweetener? It's Pyure Organic Stevia All-Purpose Blend Sweetener. You can find it at Walmart, but it's also available at Amazon for those who like to shop online.

How to make a low carb trail mix

The easiest way to make a keto trail mix is to just blend the stevia sweetened dried cranberries with nuts, seeds, and unsweetened dried coconut. However, I wanted a candied mix to share over the holidays.

That's why my mixture adds low carb sweetener and cinnamon. But you don't want granular sweetener to just be stirred in. It's better to coat the nuts, coconut, and cranberries in a thin sweet coating.

In order to get the sweetener sticking to the fruit and nut pieces, the pieces are coated with a frothy beaten egg white and then baked on a sheet pan. This allows the sweetener and cinnamon to stick to each piece. And it makes a nice thin shiny candy-like coating on each piece of the low carb trail mix.

This process could be used to candy nuts by themselves as well. The crunchy sweetened coconut in this mix was perfect. And I thought the touch of cinnamon was a great addition.

This may not be the best trail mix to eat regularly on a keto diet. But it's a great snack to make and share for special occasions like the holidays.

For a healthy trail mix recipe, I would omit the added sweetener. So the dried cranberries would just be mixed with almonds, unsweetened coconut, and maybe some sunflower seeds. Feel free to add your own blend of low carb ingredients into the snack mix.

I hope you enjoy this keto friendly trail mix as much as I do. And don't forget to come back and leave a comment and rating if you do give the recipe a try. 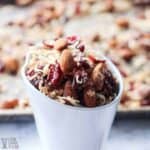 The candy coating can be left off to make a healthier keto trail mix for snacking. And there's no need to coat the mixture and bake it if the sweet coating is left out. To make candied nuts (without fruit and coconut), coat them in the egg white and mix in the sweetener and cinnamon. Then bake on the sheet pan as instructed. Feel free to change up the nuts or leave out the coconut. The cranberries can be left out as well, but fruit is typically added to trail mix.