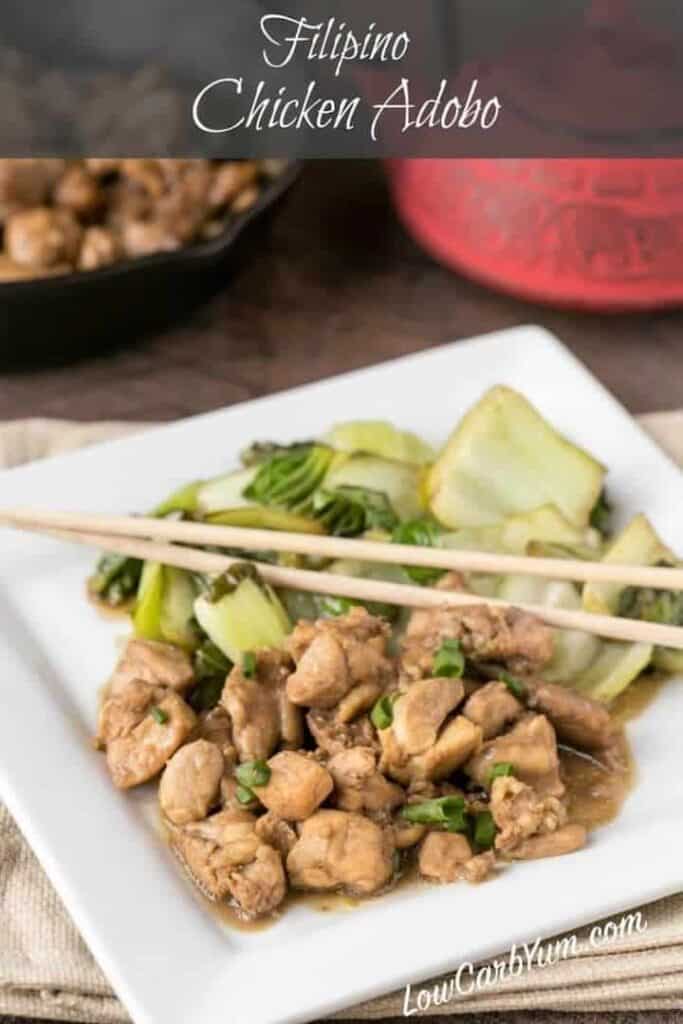 Try our popular Filipino chicken adobo recipe for a quick and easy low carb dish. The meat is cooked in a tangy mix of cider vinegar, soy sauce and garlic. It's a family favorite!

Chicken adobo is by far my family's favorite low carb chicken recipes! And it's a dish I've been making for over 20 years. It's one of the first dishes I learned to cook after moving away to college.

My father is Filipino and he introduced me to this simple dish from the Philippines. I remember eating it often in our house while growing up.

💛 Why you'll love it

My recipe differs a little from the standard one that my father made. The Filipino chicken recipe my father made used a whole chicken for his recipe that he cut into small pieces. It was enough to feed our family of eight on a tight budget.

The recipe my father made is more traditional as it used chicken with skin and bone. He also used peppercorns and bay leaves for added flavor. And he left more of the marinade in the final dish.

I prefer using boneless meat without the skin. Although I used to use chicken breasts, I prefer making it with thigh meat now. The thigh meat is also much juicier than breast meat which tends to be a bit dry after cooking.

To make my chicken adobo recipe, simply combine the following ingredients in a pan:

The pan is then covered and simmered over medium heat for ten to fifteen minutes stirring occasionally. Next, the pan is uncovered and the heat is raised to medium high. The chicken is then cooked until the marinade has cooked off and the meat is browned.

If you don't like chicken, you can make this dish using other meat. Pork adobo is especially popular.

I never measure the ingredients when making the recipe. Therefore, the measurements in my recipe are approximate so feel free to adjust them to suit your own taste.

Some prefer a saucier chicken adobo where the marinade isn't completely cooked off. To make it that way, just cook uncovered until the meat is fully cooked.

If you've never had chicken adobo made with the Filipino marinate, you're in for a real treat. The vinegar gives the dish a little tang while the soy sauce (or coconut aminos) gives it a salty taste.

Because of the vinegar, the meat stays tender inside even when the outside is browned. And the garlic gives some added flavor along with the soy sauce.

Using coconut aminos gives a touch of sweetness. But if using soy sauce or tamari, a little sweetener can be added if desired.

What to eat with Filipino chicken adobo

If the adobo is kept on the saucy side, it's perfect for serving over cauliflower rice. If cooked until very brown and little sauce, it's great to use as a topping for low carb salads.

It's a dish that goes great with steamed or roasted vegetables. Or it can be served with Asian style stir-fried vegetables cooked in a little olive oil and soy sauce. We also like to serve it with cauliflower fried rice.

Where can I find other Filipino recipes?

There aren't a lot of Filipino blogs online, but there are some awesome Filipino bloggers that I follow. One is Pie at Eat to Your Heart's Content and the other is Abby at Manila Spoon.

What is Chicken Adobo?

If you've never heard of this classic Filipino dish, you may be wondering what it is. It's simply chicken that's been marinated in a seasoning sauce. The name comes from the Spanish word "adobar" which means "marinate" in English. And it's often referred to as the National Dish of the Philippines.

Although chicken is a popular meat to use in the marinated dish, Filipinos often use pork and seafood too. And vegetables may also be mixed in. Some people even make vegetable adobo and serve it as a side dish.

The primary component of Filipino chicken adobo is the marinade itself. This sauce is seasoned with vinegar, soy sauce, and garlic. Peppercorns are also traditionally used. To make the dish, the meat and or vegetables are simmered in the marinade until browned.

If you like Filipino food, be sure to check out some of the other recipes that I've shared on the blog. 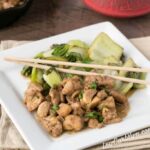 Thigh meat was used, but you can use breast meat if you prefer. Chicken pieces with meat and bone can also be used. For those that don't like chicken, the dish can be made with other meat like pork or seafood. Vegetables can also be used or added. The measurements for the ingredients are approximate. Feel free to adjust the amounts used to suit your own taste. If you prefer a saucier chicken adobo, simply cook just until the meat is cooked and don't cook off the marinate. Traditional recipes add peppercorns and bay leaves so add those for a more authentic Filipino chicken adobo. A little sweetener can be added if desired. But using coconut aminos will add in a touch of sweetness from the coconut.