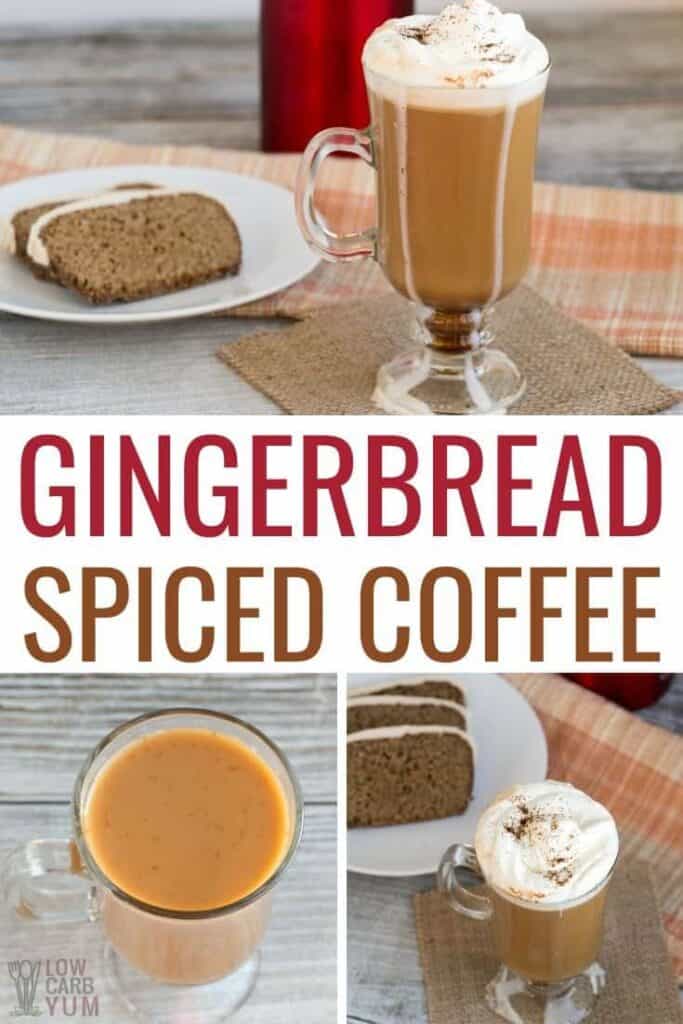 Gingerbread coffee is a spiced coffee recipe that will fill you with holiday cheer. Each sip of the sweet gingerbread spice blend is guaranteed to put you in the spirit of the season.

While decorating the Christmas tree this year, I wanted to sip on something a bit festive. Rather than reach for the hard liquor, I made a spiced gingerbread coffee recipe for one! This little treat has a nice sweetened blend of ginger, cinnamon and cloves.

I’ll admit that I probably drink way too much coffee. Even though there are benefits like improved focus, the caffeine really needs to be consumed in moderation.

I’ve been trying to make the change over to tea. But it doesn’t have the same impact so I keep returning to my favorite cup of joe. It’s always been a treat I look forward to every morning.

I usually just mix in a little non-dairy coconut creamer into my coffee. But occasionally, I’ll add in spices like cinnamon or ginger. However, adding gingerbread spice is the preferred blend for Christmas.

How to make gingerbread coffee

I just mixed up a spice blend with some low carb sweeteners in my mug.

Then, I brewed a single cup of Starbucks French Roast coffee in my K-cup brewer.

I should have used a larger mug and topping off the coffee with whipped cream caused some dripping over the sides.

It did kind of give the mug a cool striped candy cane type of look, though. However, no need to make a mess next time!

I know that the single brewer machines like the  Black & Decker Brew ‘N Go that use regular ground coffee are much cheaper and eco-friendly than the K-cup machine.

They also allow much greater flexibility in the water amount used as well as the amount of coffee grinds. I’ve just got to make the switch!

For another fantastic spiced coffee recipe, try making ginger coffee by leaving the cinnamon out. Or you can use a low carb ginger syrup with a dash of cinnamon and nutmeg.

Although ginger and cinnamon are the primary spices, a gingerbread spice blend often contains allspice, nutmeg, cardamom, and cloves. I’ve added a dash of cloves to the top, but feel free to add in one or more of the other spices too.

I enjoyed this low carb spiced gingerbread coffee with a slice of gluten free gingerbread. A great combination, right?

You can also enjoy this flavored coffee with a traditional low carb yule log recipe. Or just sip it with a buttered low carb bagel.

Why not pair it with some keto friendly Christmas cookies as well? Here’s a few of my favorites:

Don’t forget to leave a comment letting us know how the drink turned out. 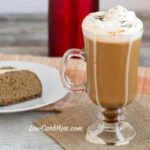 Author: Lisa MarcAurele
4.8 from 5 votes
A low carb coffee with gingerbread spice flavor is a perfect beverage to enjoy during the holiday festivities. It adds a nice touch of spice to coffee.

If the stated sweeteners are used, there’s about 10.1g erythritol/fiber (from sweetener). However, any sweetener can be used, including pure monk fruit or stevia which will add no grams of carbs. Sweetener can be adjusted to taste, but on average, about 2 teaspoons sugar equivalence should be used.

© LowCarbYum.com
Unauthorized use of this material without written permission from Lisa MarcAurele is strictly prohibited unless for personal offline purposes.
Single photos may be used, provided that full credit is given to LowCarbYum.com along with a link back to the original content.
Last Updated: 15 Nov 2019