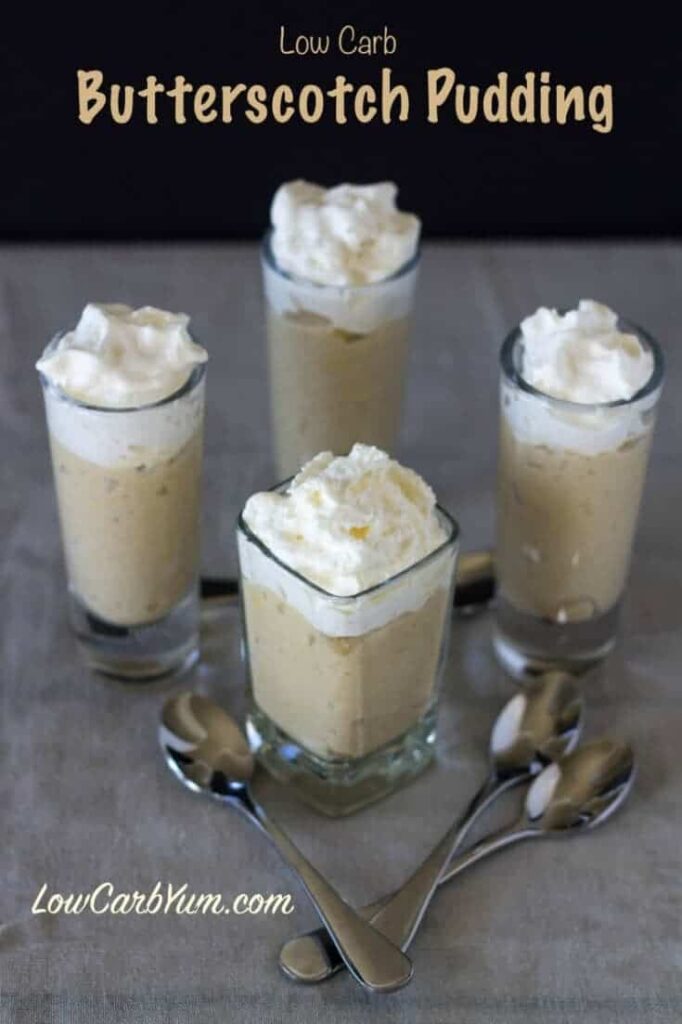 A low carb homemade butterscotch pudding recipe from scratch made with butter and a brown sugar substitute. It fills you up with only a small portion.

Are following a Paleo diet or just want to cut out some dairy? Coconut cream is the perfect dairy free substitute for heavy cream in low carb recipes. Of course, it's not the best option if you are allergic to coconut or just don't like the taste of coconut.

I buy my Coconut Cream from LC Foods or Thrive Market. You may also be able to get it at an Asian market or Trader Joe's.

Another product that I've recently fell in love with is Sukrin Gold. It's my favorite product from SukrinUSA because I finally found the perfect low carb substitute for brown sugar after years of searching for it.

I have tried other brown sugar replacements, but always turned to adding a little blackstrap molasses to get that authentic taste and texture that brown sugar brings. No need for that anymore!

One of my favorite flavors made with brown sugar is butterscotch. It's difficult to create this flavor without molasses, but Sukrin Gold does a nice job and it shouldn't spike your glucose levels like molasses can.

For this homemade butterscotch pudding recipe, I did use butter. But, ghee could be used for paleo.

To make this pudding low carb, I used coconut cream and Sukrin Gold. There are my two new favorite ingredients.

Although I've been moving away from using xanthan gum, I still have a little bit left in my bottle so it was the thickener I used. Guar gum is less controversial than xanthan gum.

I've seen some low carb recipes that use psyllium husk in place of xanthan gum, but I haven't done a lot with psyllium. I need to experiment more with using psyllium husk as a thickener, but guar gum works just like xanthan gum.

This homemade butterscotch pudding recipe from scratch was thick enough to use as a pie filling. It did seem a bit thin after adding the xanthan gum. But, the pudding gets really thick after chilling in the refrigerator for a few hours.

You can spoon the pudding into individual serving dishes if you'd like. A little goes a long way because it's very high fat. So, it's very filling.

I opted to pour the hot pudding into one big bowl and lay a sheet of plastic wrap on top so a skin didn't form. Totally optional.

You can always peel the skin off if you don't like the idea of plastic touching your food. This homemade butterscotch pudding recipe from scratch is also super cute in little shot glasses topped with whipped cream.

A shot glass portion is the perfect serving size as the high fat of the Coconut Cream will fill you up fast. So, definitely give this low carb pudding from scratch a try! 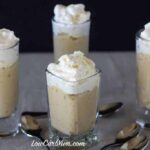 It's important to temper the eggs and keep the mixture at a temperature where the eggs won't cook. Otherwise, there will be bits of cooked egg in the pudding. So this is an essential step that needs to be done correctly. However, if you do end up with the cooked egg, you may be able to get most out with a mesh strainer. Nutrition per serving: 2.4g net carbs, 10g erythritol