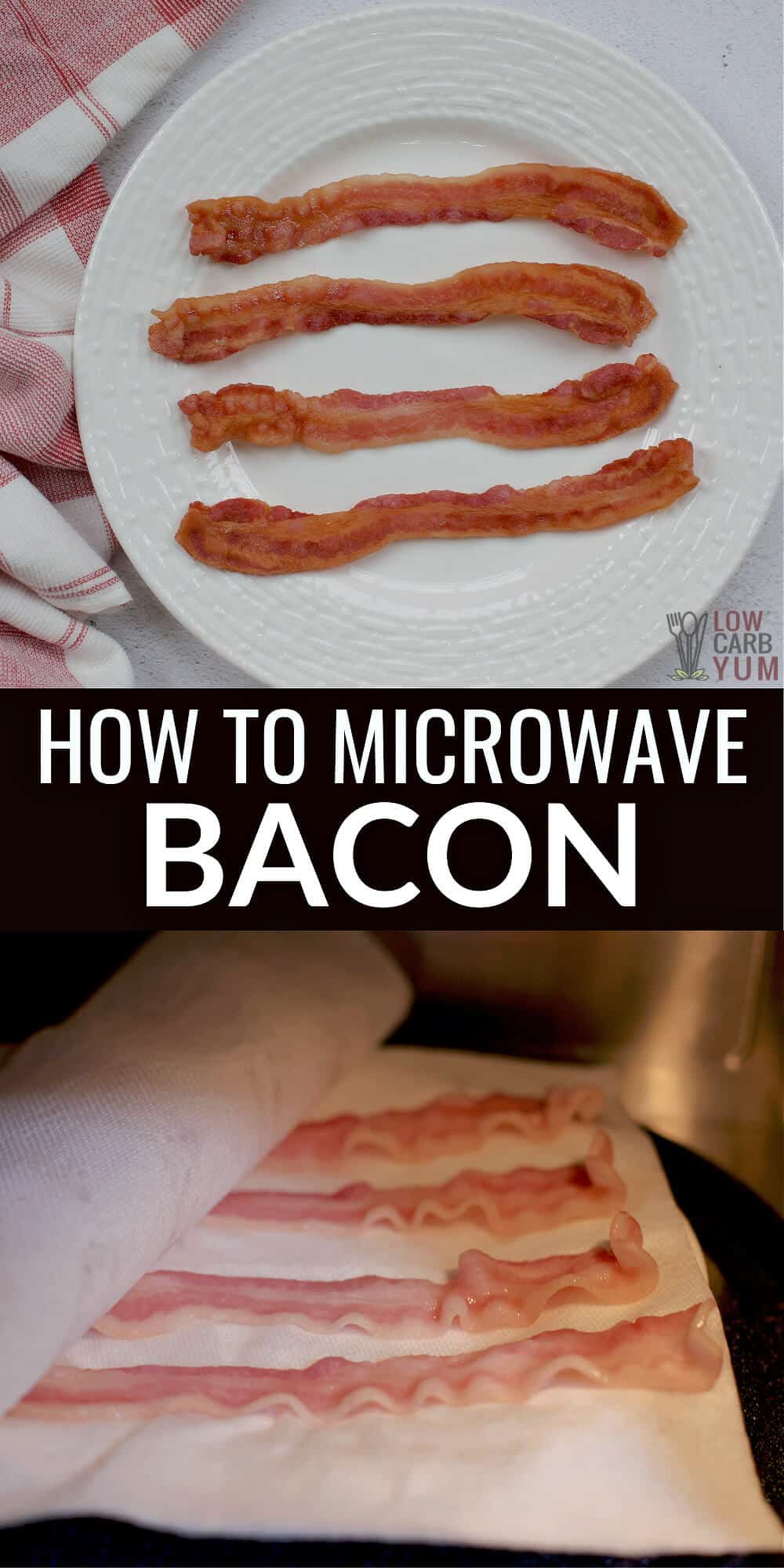 Bacon is a staple breakfast item for many people, but the traditional method of cooking bacon on the stove in a frying pan can be messy and time consuming. Once you learn how to cook bacon in the microwave, you'll never want to prepare it any other way.

💛 WHY YOU’LL LOVE IT

Microwave bacon is one of the easiest, quickest ways to cook bacon. It takes less time than any other cooking method so you'll be eating your crispy bacon much sooner.

You also don't have to worry about grease splatter as the bacon grease is absorbed during the cooking process by pieces of paper towel. Whereas the oven method requires cleaning a baking sheet after and many times the bacon fat spatters into your oven causing a mess.

That's why my personal preference is to use the microwave when I'm only doing a small batch of bacon. It's the simplest way to get it cooked fast for only one or two people.

Microwaving bacon is not only quick and easy, it results in less cleanup. The paper towel catches all the fat and grease you would normally wipe up when making bacon in the oven, air fryer, or on the stove top.

Before starting, make sure you have a microwaveable plate or rimmed sheet that will fit inside the microwave. You also need to have some paper towels to line the plate or sheet.

You don't need any special equipment other than the microwave oven itself. Of course, you are going to need a few strips of raw bacon.

If you cook a lot of bacon in the microwave, you may want to buy microwave bacon trays or cookers. But you will need to cleanup the grease by pouring it off into a container and washing by hand or the dishwasher.

An easy way to prepare uncooked bacon is to put it between layers of paper towels on the microwave-safe plate. If you follow these guidelines, there will be less mess to clean up.

To microwave bacon, arrange strips on a plate with plenty of space between them. Cover the top of the bacon with a paper towel or another microwave-safe cover.

Microwave for two to four minutes or until crispy. You may want to flip the bacon slices halfway through the cooking time.

The bacon should be done when the surface looks crisp and the bacon is golden brown.

Discard paper towels. Rinse the plate, and then wipe with a paper towel. Cleanup is that simple!

There are so many ways to use cooked bacon! We all know it's a staple for those on a keto diet, especially as a side to eggs at breakfast.

I like to keep the cooked slices in the refrigerator for a quick keto snack. Chopping the slices into bits also makes a great topping for low-carb salads.

Cooked chopped bacon is also great for making Southern green beans and a cheeseburger casserole. I love making savory fat bombs with them too.

Before getting to the printable recipe, I wanted to share some answers to questions that are often asked. If you need help with a different issue, you can leave a comment below the recipe.

Can you cook raw bacon in the microwave?

Yes. Microwaving is the fastest way to cook bacon and the strips come out straight and crisp. Cleanup is easy too if you wrap the raw bacon in paper towels first.

How long does it take to cook bacon in a microwave?


To cook bacon in a microwave, you should place the bacon on a plate with a paper towel to absorb the grease. Cook for about 2-3 minutes.

How much bacon can you cook in a microwave?


It's best to only cook 4 to 6 slices of bacon at a time depending on the size of the microwave.

How do you reheat bacon in the microwave?

Microwave bacon in a microwave-safe dish for about 1 minute on high or until desired crispiness.

Microwaving bacon is not bad. The microwave cooks the bacon evenly and it doesn't make the bacon soggy like frying can do.

Now that you know how to cook bacon in the microwave easily, you may be looking for more ways to enjoy it. Here's some of my favorite recipes that use bacon. 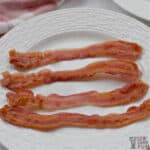 Cooking time will vary depending on the thickness of your bacon. Thinner slices require a shorter time than thick bacon. Cook in short increments for the best results. I like to check on the strips in 30-second intervals to get the perfect bacon. Don't try to cook too much bacon at a time. Cooking only 4 to 6 bacon strips of bacon at a time works best.

© LowCarbYum.com
Unauthorized use of this material without written permission from Lisa MarcAurele is strictly prohibited unless for personal offline purposes.
Single photos may be used, provided that full credit is given to LowCarbYum.com along with a link back to the original content.
« Week 74 Keto Meal Plan
20 Deliciously Healthy Low Carb Smoothies »