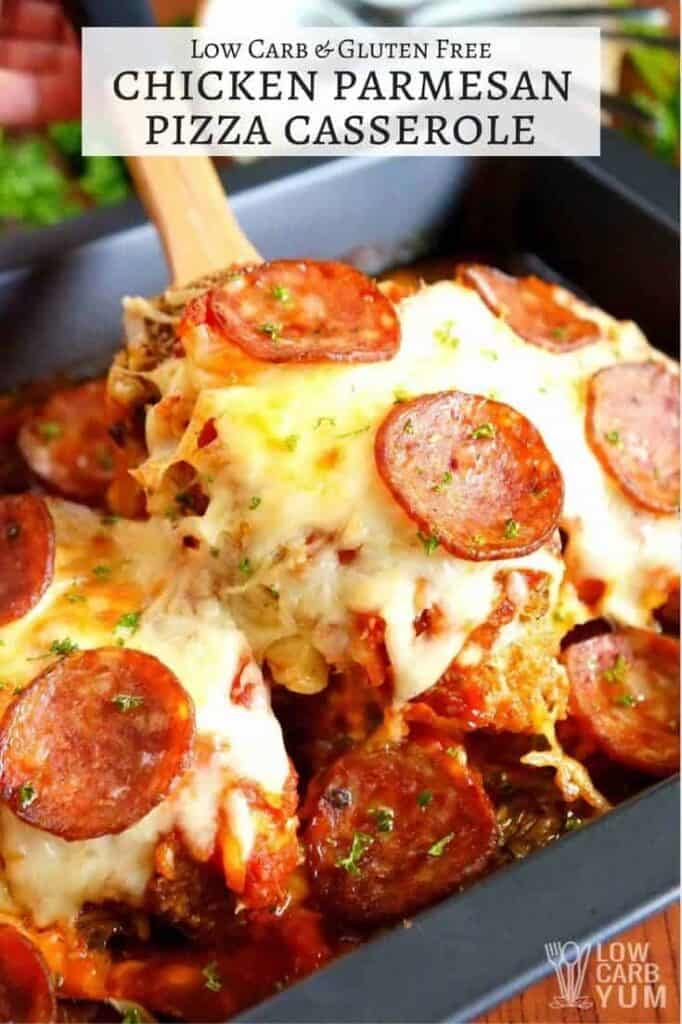 We've been getting our garden ready for summer. And, I've been thinking about all the delicious recipes I'll be making with the fresh produce. One of my favorites from the garden are eggplants.

Some people stay away from eggplants and tomatoes because they are nightshades. It's said these common vegetables may be related to arthritis.

I haven't had any pains or inflammation, but I have always wondered if I should try to avoid them anyway. It would be very difficult to give up tomatoes.

So, if you are avoiding nightshades, you'll want to skip this yummy low carb chicken parmesan pizza casserole recipe. It's loaded with eggplant and tomatoes!

The casserole combines three of my favorite Italian dishes. These popular dishes are pizza, eggplant parmesan, and chicken parmesan.

I've already made low carb versions of two of the dishes. Rather than made a separate low carb chicken parmesan, I decided to make a combination casserole.

I may eventually make just the chicken parm recipe. But it would just be a recipe like this without the eggplant and pepperoni.

The chicken fillets used in the recipe are large. It's a bit much to eat a full one so I recommend cutting each in half for each serving.

It's a little extra work to put this casserole together, but I find it's worth the time. So, put it on the list of recipes to try when you aren't rushed for time.

I used three long slim eggplants that are an Asian variety. If you can't find those, one of the larger ones would likely be enough.

And, if you aren't a fan of eggplant, you can just leave that part out. Same thing with the pepperoni. If you leave them both out, you'll be left with just a regular low carb chicken parmesan casserole.

I'm often an indecisive person so this mixed casserole suits me well. It's the kind of thing you make when you just can't decide on one recipe so you combine them.

And, if you just leave out the eggplant, this is pretty much a pizza chicken casserole. You can even leave the coconut coating off if you'd like.

Have you ever combined recipes into one when you couldn't choose which to make?

Want to try some other amazing keto pizza recipes? I've linked to a few of my favorites below:

Each slice is ½ chicken fillet.

© LowCarbYum.com
Unauthorized use of this material without written permission from Lisa MarcAurele is strictly prohibited unless for personal offline purposes.
Single photos may be used, provided that full credit is given to LowCarbYum.com along with a link back to the original content.
« Gluten-Free Rhubarb Crumble Recipe (Sugar-Free, Keto)
Matcha Green Tea Smoothie - Keto Low Carb »