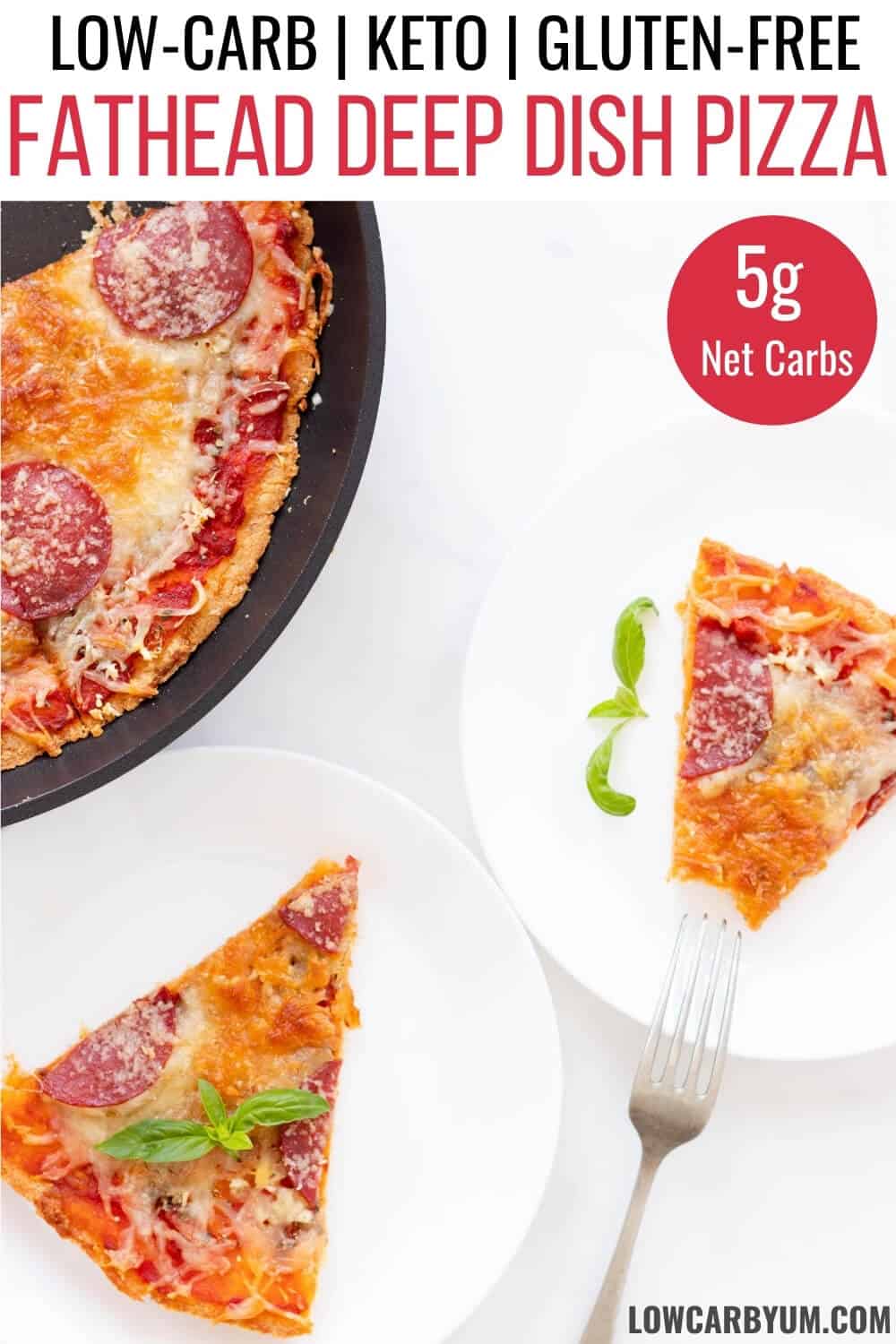 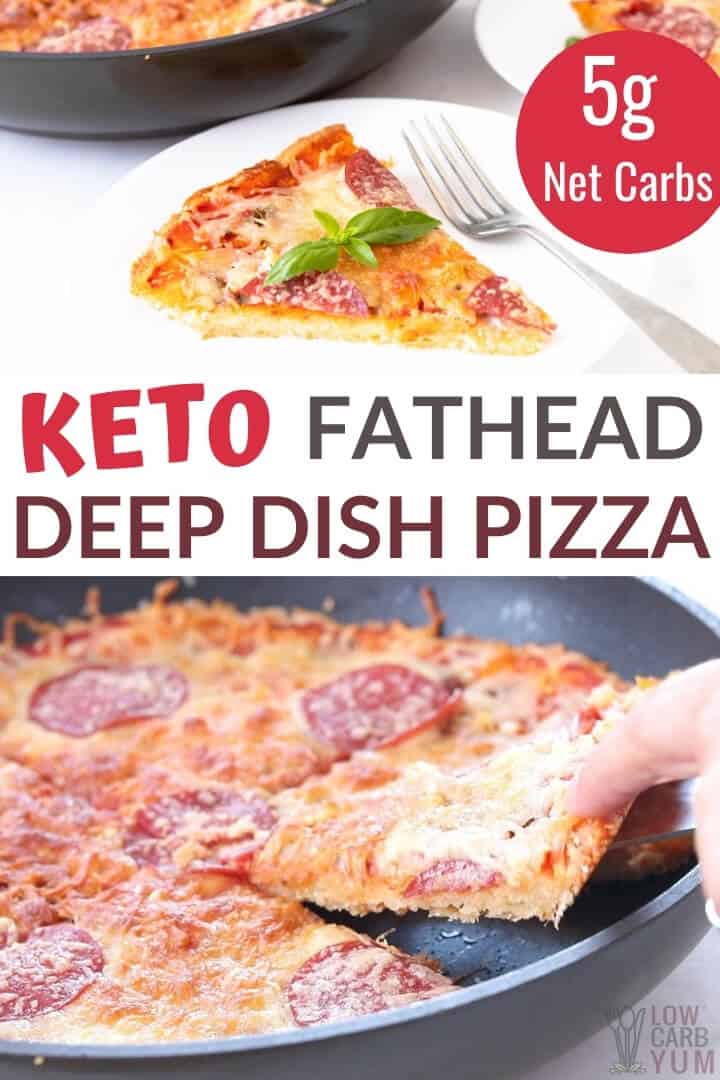 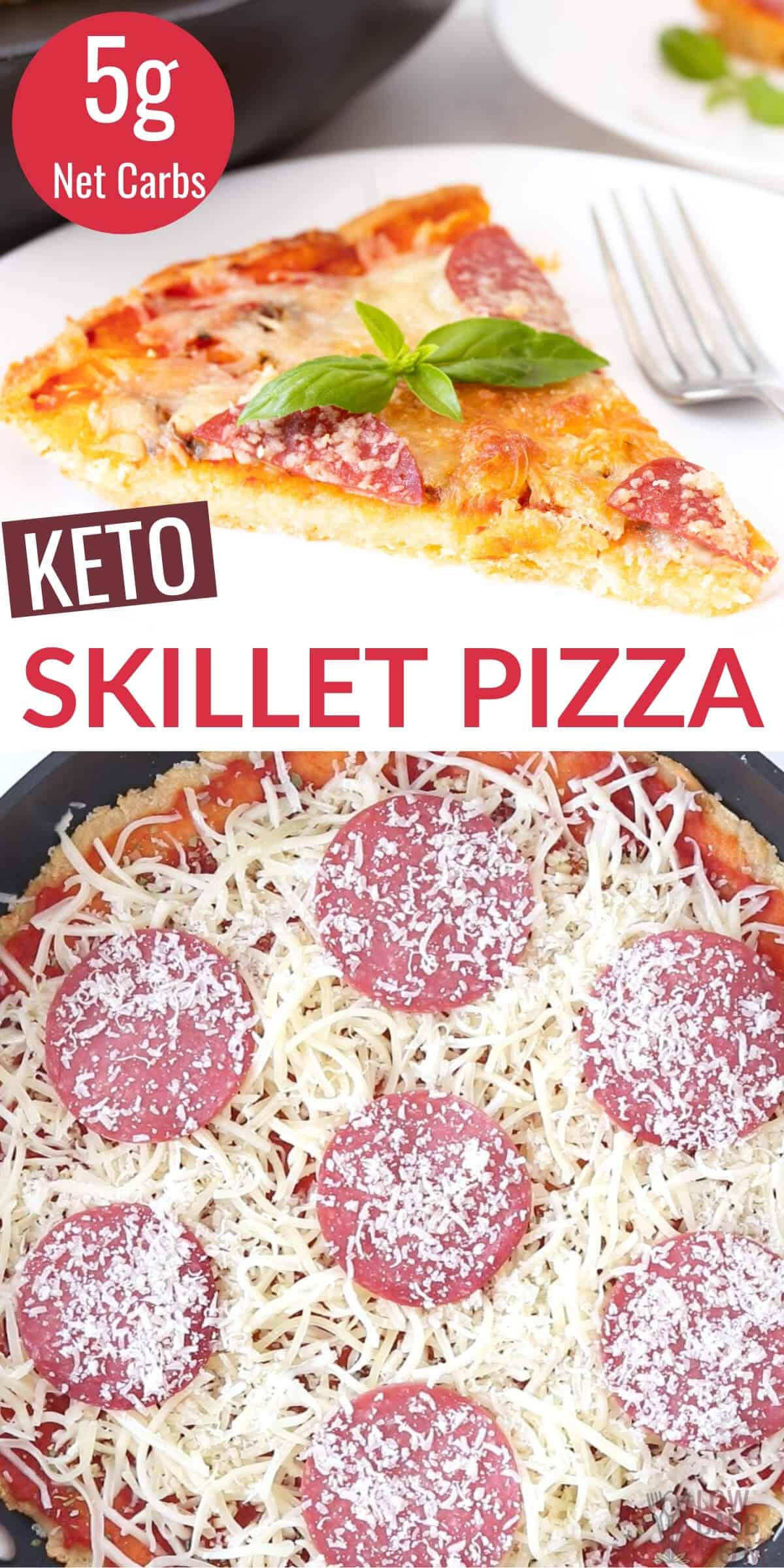 I have been experimenting with using melted mozzarella in breads and crusts. After making the Sloppy Joe Pie using a mozzarella cheese based pie crust on top, I felt the need to develop a pizza crust that even the pickiest members of my family would enjoy.

This keto deep dish pizza recipe with Fat Head dough was tested by my older daughter, a very picky 17 year old. She knew the crust was low carb and gluten free, but that it contained melted mozzarella cheese.

Her response after gobbling down two large slices was "tastes like there isn't anything wrong with it" which translates to "tastes just like regular pizza." Score!

If she likes this pizza, it was a success, especially since she loves those frozen rising crust pizzas which have a thick bread crust. She isn't a big fan of the way coconut flour tastes and with this recipe she could not even detect it because I used a fairly small amount.

This recipe was adapted from a Deep Dish Sausage Pizza recipe at All Day I Dream About Food. I made Carolyn's pizza a couple days before coming up with this recipe.

Although her pizza was tasty, my daughter and I felt the crust tasted too much like almond flour. Therefore, in my low carb pizza recipe, I reduced the amount of almond flour and added in melted mozzarella cheese. This made a huge difference in taste and texture in the Fat Head dough!

I have a 900 watt microwave convention oven. To melt the mozzarella to the right consistency, I microwave on 40% power for two minutes. If you have a higher wattage oven, you may want to lower the power to 30% or increase the power to 45% for a smaller wattage microwave.

I hate getting the raw egg and flours stuck on my hands, so I like to use a rubber spatula to knead the dough together. It's especially bad when it gets under your nails. I've tried using disposable kitchen gloves, but my nails always seem to poke a hole through the thin plastic.

Folding the dough with a rubber spatula works well for me. Once the dry mix appears to be well combined into the cheese, I ball it up and put it between two sheets of waxed paper. Then I take a rolling pin and roll it into a circle that's a couple inches larger than the diameter of the cast iron pan.

Some folks use parchment paper for their Fat Head dough, but I find wax paper sticks less. You can use either. Once the dough is rolled out, simply take of the top sheet of wax paper, invert it into the pan, then peel the remaining sheet of waxed paper off the top.

Other Uses for the Dough

The crust for this keto pan pizza is precooked before putting on the toppings. The crust looked great by itself. I'm thinking it would make some awesome bread sticks.

I plan to try that next to see how it turns out. It's a much thicker bread than what I got when I made the garlic cheese bread sticks.

Carolyn suggested covering the edges of the crust with aluminum foil so they do not become over baked. I used a pie crust shield similar to this one which fit perfectly in my cast iron pan.

The low carb pizza recipe takes a bit longer to bake than a regular thin crust on a baking sheet or stone. I baked the pizza for about 30 minutes. This was in addition to the 15 minutes it took to pre-bake the crust.

Although this isn't a super quick from start to finish, it's worth the time. However, I think once the crust is baked, it could be frozen, vacuum sealed in a freezer bag, and then used for an easy pizza meal later.

This is the best low-carb gluten-free deep dish pizza I have ever eaten. I guarantee even your friends who don't do low carb will love this pizza, especially if they like the thicker crust Chicago style pizza.

The crust is definitely better than any of the many gluten free pizza crusts that I've tasted. But, if you don't like the thicker pan style, you may want to check out my almond flour pizza crust which is thinner.

If you love this easy fathead pizza dough recipe, you need to give some of my other low-carb pizza recipes a try. Here's the most popular ones: 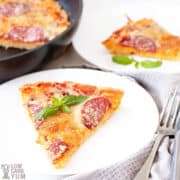 Pizza can be made in any deep dish pan, but the crust is crispiest when using a stoneware or cast iron pan. The coconut flour can be reduced to 2 tablespoons by adding 3 tablespoons of unflavored whey protein isolate powder.