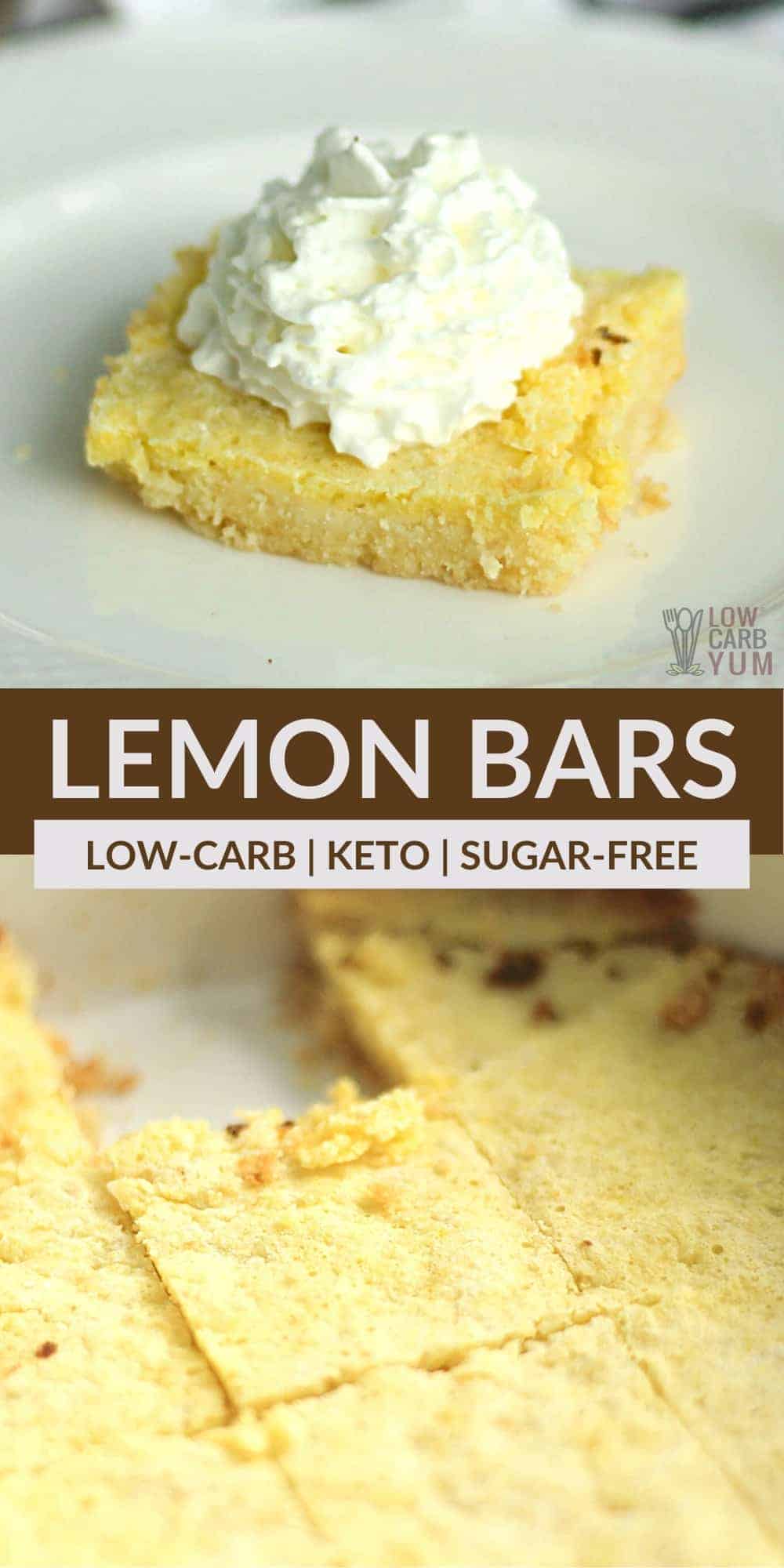 A luscious low carb lemon bars recipe that is very close to the real thing. But it's a sugar free treat made with gluten free coconut and almond flour.

While I was away on a work trip, there were so many sweet temptations. Of course, none of them were low carb desserts. One of the items that caught my eye were some triangular lemon square bars. They had a shortbread crust with a thick lemon topping on top.

My mind started churning on how I could make my own low carb lemon bars when I got home. Based on an old recipe my mother used, I noted some potential recipe ideas I could test when I got home.

One recipe used all Carbquik for the crust, the other used a blend of almond flour and coconut flour. The recipe could likely be made with one flour or the other, but I like to combine both low carb flours.

For the crust, I ended up using a mix of almond flour and coconut flour to keep the bars gluten-free. I simply mixed the flours with low carb sweetener and butter with a pastry cutter. To help the crust hold together better, I added a little xanthan gum but that can be left out if desired.

The crust mixture was then pressed into a square 8x8 pan. After baking for about 18 minutes, the crust turned a nice golden color. I let it cool a bit on a rack before preparing the lemon topping.

This mixture was then poured on top of the baked crust and spread into an even layer. Then I put the pan back in the oven to cook the topping.

It took about 15-20 minutes of baking for the lemon topping to set. After cooling on a baking rack, I was able to cut the low carb lemon bars into squares.

The amount of lemon topping isn't a lot, so I may try doubling the amount of topping the next time I make these bars. However, the thin topping on the finished squares was perfect. It was chewy and the crust was similar to a shortbread.

If you are looking for more of a traditional lemon bar with the thicker topping, I would try doubling the amount of topping, using a full packet of gelatin. But, I preferred the thinner lemon layer.

I wonder how a layer of cheesecake would taste. Maybe I'll experiment with low carb lemon cheesecake bars. That does sound tasty, doesn't it?

Overall, these low carb lemon bars were just as I had hoped. Although I made these gluten-free, those who aren't concerned with gluten can replace the coconut flour with Carbquik.

The gluten free crust on used to make these sugar free lemon bars would be great for other recipes too. I'm thinking it might taste better than the pecan crust I used on my chocolate chip cheesecake bars.

Any recipe for low carb cookies could also be used to form a crust for these bars. I think my gluten free ginger cookies or my keto coconut macaroons would work perfectly. Lemon goes well with both ginger as well as coconut.

A basic shortbread crust would work well too as the base for these bars.

If you try these out, I'd love to know what you think of this easy low carb lemon dessert. And I'd also be interested in hearing about treats you've seen lately that you'd like to see made low carb? 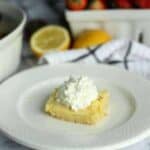 Carbquik can be used in place of the coconut flour if gluten free isn't needed. The lemon topping can be doubled for a thicker layer on top if desired. Net carb per square: about 0.9 g