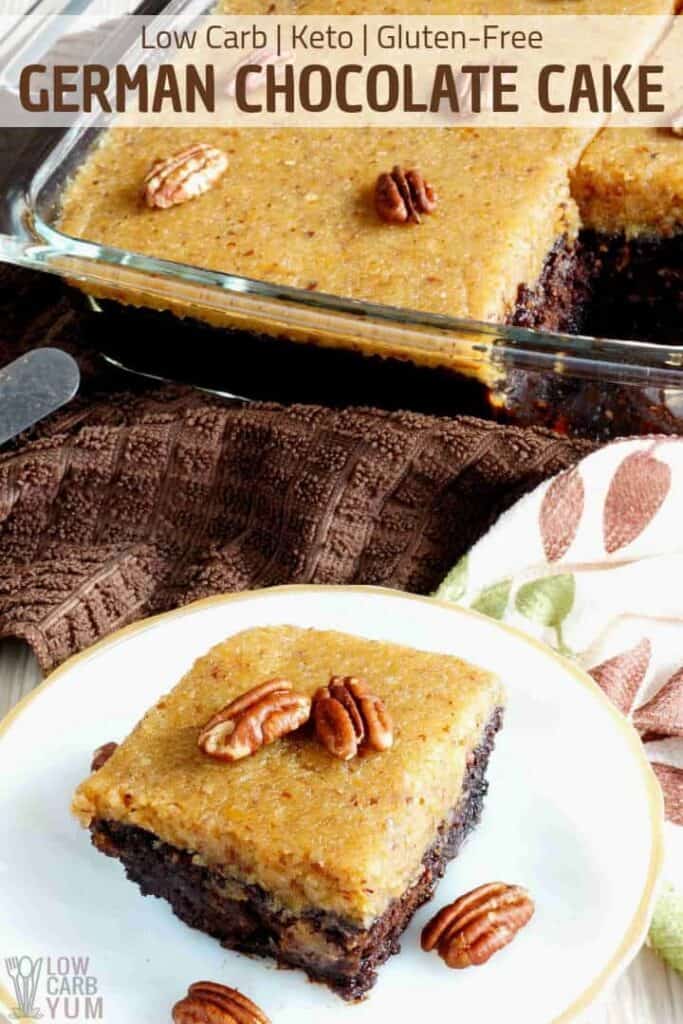 While away on a business trip in Virginia, I was tempted by some delicious looking treats in the meeting room at the hotel. But since I've been following low carb for years, I knew it was best to stay away.

However, one of the snacks really grabbed my attention and I couldn't stop thinking about it. It was a chocolate cake with coconut pecan frosting. It reminded me of the German chocolate cake that my mother used to make when I was a child. And it's not a cake that originates from Germany, the name comes from the chocolatier who's baking chocolate was used in the original recipe. (source)

When I got home from the trip, there were several large zucchini in the garden that my husband told me would be great for making bread. But, I couldn't get that cake off my mind so I opted to make a healthy chocolate zucchini cake instead.

To get a nice spongy cake texture without gluten or excess carbs, I decided to use coconut flour. I find it makes a much lighter cake than using almond flour. But if you prefer almond flour, you can check out my yellow squash cake instead.

However, coconut flour can be very dry if adequate liquid isn't added. That's why shredded zucchini was a perfect add into the batter. It results in a moist low carb cake every time!

Then eggs, coconut oil, and vanilla are blended in. The shredded zucchini is stirred in next and then optional sugar free chocolate chips can be added if desired. I find the cake has a better flavor when the chocolate baking chips are included.

Finally, the batter is poured into a baking pan. I like to use either a 9x9-inch square or a 9.5-inch round pan. It's then baked at 350°F for about 40 minutes or until the cake tests done.

How to make a coconut pecan frosting

The coconut pecan frosting for the sugar free German chocolate cake is made on the stove top. Almond milk, sweetener, egg yolk, and butter are heated over medium heat and then xanthan gum is sprinkled in as a thickener.

Once thicken, the mixture is removed from the heat and vanilla extract, unsweetened dried coconut, and pecans are stirred in.

The frosting spreads best when warm, but the cake should have had a chance to cool before adding the coconut pecan topping. An angled icing spatula is best for spreading and smoothing out the frosting layer.

To make a pretty presentation, pecan halves can be added on top of the cake or each slice. Toasted coconut could also be used to garnish the cake and it's a good option for those who want more coconut flavor. But if you don't like coconut, feel free to use a sugar free chocolate buttercream frosting instead.

Thoughts on the recipe

This gluten free German chocolate cake turned out to be a very moist. I didn't drain the zucchini after it was shredded.

Because we had quite a bit of zucchini on hand, I added a lot to the batter. And, I wanted it to be very rich so I added some sugar free chocolate chips. But, you can leave out the chips if you'd rather not add in the extra carbs.

The coconut pecan frosting was amazing! If you don't like coconut or pecans, feel free to use another frosting or leave it off. The cake itself is the best low carb chocolate cake recipe I've tried!

If you liked this recipe, you may want to check out the following ones too!

Enjoy this easy and delicious low carb chocolate zucchini cake with coconut pecan frosting! And be sure to let us know what you think of the cake if you do give it a try by leaving a comment below. 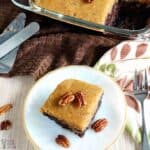 Each slice has about 6 grams net carbs There's no need to squeeze out the moisture in the shredded zucchini. The extra liquid is needed to keep the coconut flour cake from being too dry. Pecan halves or toasted coconut can be used as garnish over the frosting if desired.