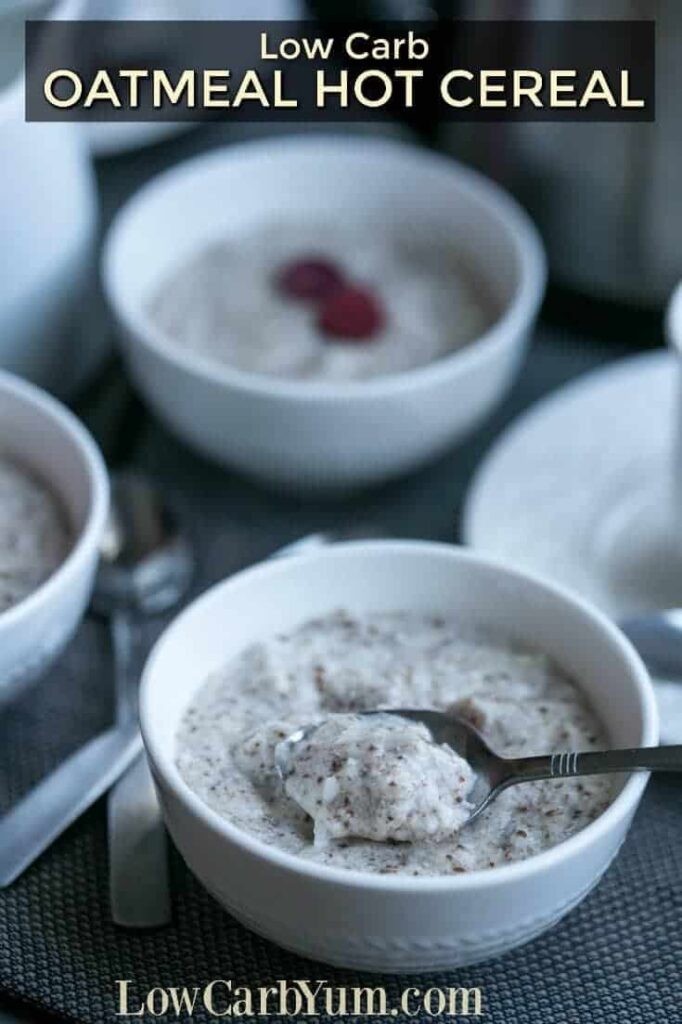 Do you love the comfort of hot cereal on a cold morning? If so, this yummy low-carb keto oatmeal recipe is sure to become a winter favorite.

It's been getting pretty cold here in Connecticut. Last weekend, we had our first temperatures in the single digits for this winter season.

As I sat in the warm house, my husband was out scooping snow with the tractor with the temperature at 7 degrees F. Thankfully, the weather warmed up into the 50s during the week.

To help brush off the chill, I'm a fan of hot cereal in the winter. That's why I decided to develop my own low carb oatmeal recipe.As part of my Keto Krate, I got to sample the Noat-Meal hot cereal made by Ketologie. Although good, I found it to be a bit pricey.

To save a little money, I figured I should just come up with a homemade recipe for oatmeal using the same idea. Coconut flakes and flax are in the pre-made version, so that's what I used.

I know a lot of people try to avoid flax seeds, but the meal does help thicken the cereal. If your opposed to using them, a smaller amount of chia would work too.

Searching the web for low carb oatmeal recipes, I found this one. It was pretty close to what I was looking for, but it did not get thick enough when I gave it a try.

I also found that the hot cereal needed a little bit of sweetener added. So, I included some liquid stevia and monk fruit which add no calories or carbs.

It took me a couple tries to get it right for me. But, there's still plenty of room for adjusting the recipe to suit your own taste.

I've always liked really thick oatmeal cereal. In fact, when I used to use the instant hot cereal packs, I'd only add about half or less of the water called for.

If you want your low carb oatmeal to be thinner, simply cut back on the flax meal or chia seeds. There's also the option to eliminate the seeds and cut back on the liquid.

Since this is a noatmeal cereal, it doesn't actually taste like oatmeal. The hot cereal tastes like coconut, which is the predominant flavor.

Toasting the coconut in the pan first really helps bring out the flavor of this low carb breakfast treat. So, if you aren't a fan of coconut, you'll want to skip this recipe. I also used coconut in my low carb muesli granola cold cereal recipe.

So, take a break from the regular eggs and bacon. You can have a delicious low carb cereal in the morning instead! 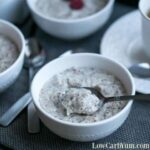 4.28 from 22 votes
Love the comfort of hot cereal on a cold morning but not the carbs? If so, this yummy oatmeal recipe is sure to become a winter favorite.
Prep Time:5 mins
Cook Time:10 mins
Total Time:15 mins
Course: Breakfast
Cuisine: American
Print Pin Review Recipe Save Recipe View Collections
Servings: 3 people
Calories: 120

Many of those who have tried this recipe have noted that the cereal was a bit thin. It's best to start with a smaller amount of liquid and gradually add more as needed until the desired thickness is reached. For a thinner cereal, reduce or eliminate the flax meal or chia seeds.