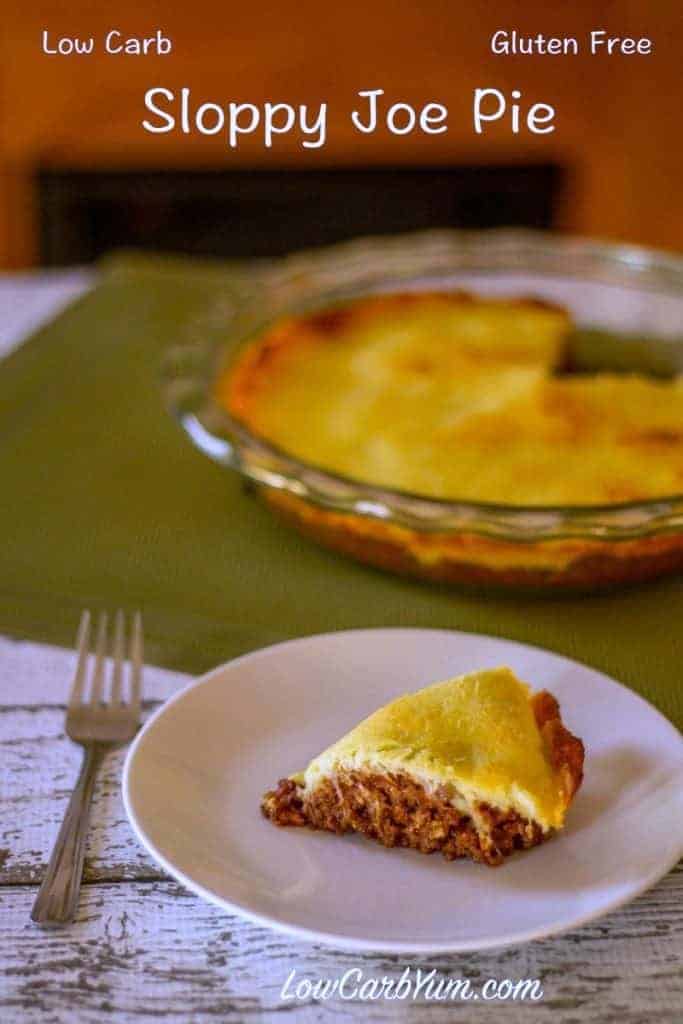 A low-carb sloppy joe pie casserole recipe that is simple to prepare. Cooked ground meat is combined with a tangy sauce and topped with a gluten-free crust.

Not sure why, but I had a craving for a sloppy joe sandwich the other day. It's been a long time since I've had one of these sandwiches which I recall eating a lot of as a child.

Sloppy joe sandwiches were often served on the lunch menu at school. There was something about piling the messy meat sauce on a burger roll and having the bread get soggy with the sauce.

I was a bit lazy and didn't want to make a separate bread to serve the meat on so I came up with this recipe for a sloppy joe pie casserole. I guess I could have whipped up one of those "bread in a minute" recipes, but something about baking in the microwave just doesn't appeal to me.

I'm sure I'll eventually give in to the convenience of making low carb bread in the microwave. I still remember how long it took to convince my mother that microwave cooking was safe.

We were probably one of the last homes in our neighborhood to have a microwave. Even to this day, I think my mom stays clear of the microwave oven when it's in use. The truth is that microwaves do emit radiation, but it's not the kind that can damage human cells.

I chose to top off the sloppy joe meat with a pie crust made by combining almond and coconut flours into melted butter and mozzarella cheese. This style of dough is often referred to as Fat head because it supposedly originates from this site.

I did use the microwave to melt the butter and cheese because it is so much faster than using a stove or cooktop. In fact, I think it would be rather difficult to melt the shredded mozzarella cheese to the correct consistency in anything but a microwave.

The mozzarella adds the elasticity that's typically missing in gluten free breads. It's best to kind of fold the dry ingredients into the dough. If the cheese starts to harden, you may need to microwave for 5-10 seconds to soften it back up. I never really worry if I don't totally get the ingredients mixed into the cheese. It will typically still roll out okay and look great after baking.

If I were baking the crust by itself, I'd use parchment on the bottom as mozzarella cheese based low carb crusts bake best on parchment paper which will also ensure it doesn't stick to the pan. Although I've made garlic parmesan bread sticks with a similar cheese based dough, I still haven't made a pizza crust. Pizza is next on my list as I have heard wonderful things about this type of rolled out pizza dough.

I used a 9-½ inch pie plate and the meat mixture only filled about half of the pan. I could probably double the amount of meat mixture next time and cut thinner slices to get more servings out of the recipe.

I didn't bother crimping the edges of the crust. I just kind of pushed them down a little to ensure the meat mixture was somewhat sealed underneath. I'm thinking this gluten free pie crust would be great for a low carb pot pie.

I baked the sloppy joe casserole just shy of 20 minutes when the top was browning and the edges becoming brown and crisp. I really enjoyed this delicious low carb meat pie.

Even my son and his college roommate stopped in and had a slice each. They probably would of eaten the whole pie, but I let them know that I needed some leftovers to bring in for lunch at work. 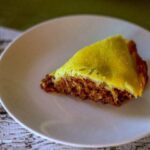