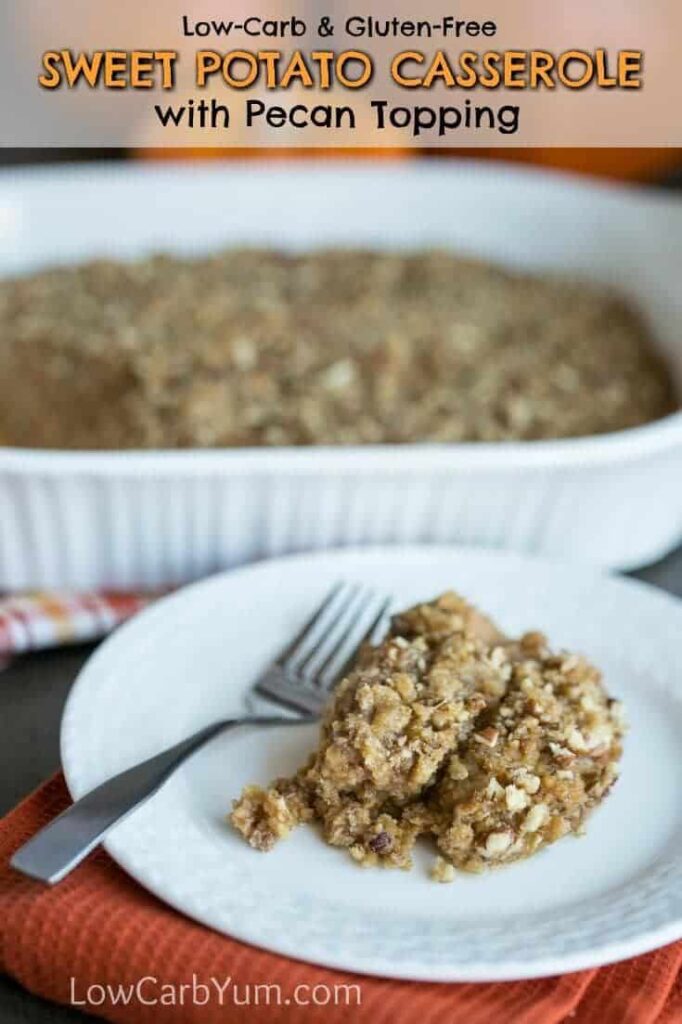 Staying away from sweet potatoes due to carbs? Try this fantastic low carb sweet potato casserole with pecan topping. It’s perfect for the holidays.

Are you stressing over what to serve at your holiday meal now that many traditional dishes are off limits? No need to worry because many recipes come in a low carb version.

I’m the youngest of six kids and times were tough growing up. My father was in the Navy while my mother stayed home The Navy pay was barely enough to support such a large family.

Our holiday meals were very modest. In fact, I remember having whole chicken rather than turkey on Thanksgiving. And, there was rarely any leftovers.

We also didn’t get together with other family on the holidays as they lived too far and it was tough to travel with so many kids in tow. So, the big Thanksgiving dinners didn’t start until I was an adult.

During one of our family Thanksgiving meals, I remember my oldest sister bringing a sweet potato casserole. I thought it was strange to add marshmallows to a side dish.

When I got my first taste of this , I thought it belonged on the dessert table. Apparently, a candy company who wanted to market their marshmallows as an everyday ingredient and the recipe went viral.

For my low carb sweet potato casserole, I left out the marshmallow taste as I never liked them on the dish. Instead, I’ve topped the casserole with a sweet pecan topping.

I also don’t use real sweet potatoes because they have about 25 grams of carbs per cup. Instead, I’ve mashed together cauliflower and pumpkin to mimic the sweet potato taste.

The idea for using cauliflower and pumpkin in a low carb sweet potato casserole isn’t new. It likely came from Maria Emmerich who is the best selling author of The Ketogenic Cookbook.

It makes sense to use cauliflower as it’s been the most popular ingredient for low carb potatoes. But, to get the flavor of sweet potatoes, you need to add a bit more.

Pumpkin is very close in taste to sweet potatoes but isn’t as sweet. That’s why you’ll need to add a sweetener to get the true flavor.

I added a half cup of Sukrin:1 to the cauliflower mixture the first time I made the casserole, but thought that was too sweet. So, I’ve lowered the amount to ⅓ cup.

If you’d like to cut back on the erythritol, you can use plain stevia instead of Sukrin:1 which is a stevia blend. I’ve included the amount of SweetLeaf drops needed.

The pecan topping adds more sweetness. I wanted the flavor of brown sugar so I mixed in Sukrin Gold with the chopped pecans.

The traditional pumpkin spices of cinnamon, nutmeg, ginger, and cloves really enhances the flavor as well. However, you can change up the spice blend to suit your own tastes.

This low carb sweet potato casserole tastes more like a dessert to me, but it does go well with turkey and ham. So, it’s a great dish to make for your holiday meal.

This year, my oldest sister, the one who introduced me to the marshmallow topped holiday side dish, has gone low carb. I plan to bring to introduce her to my low carb version of the casserole at our family Christmas dinner.

Need some more ideas for low carb holiday side dishes? My cauliflower au gratin is always a hit and so is my creamed spinach.

What are your favorite low carb recipes to serve at holiday dinners? I’d love to hear about them in the comments. 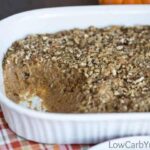 Author: Lisa MarcAurele
4.5 from 8 votes
Staying away from sweet potatoes due to carbs? Try this fantastic low carb sweet potato casserole with pecan topping. It’s perfect for the holidays.

Frozen cauliflower florets can be used in place of fresh, if desired.