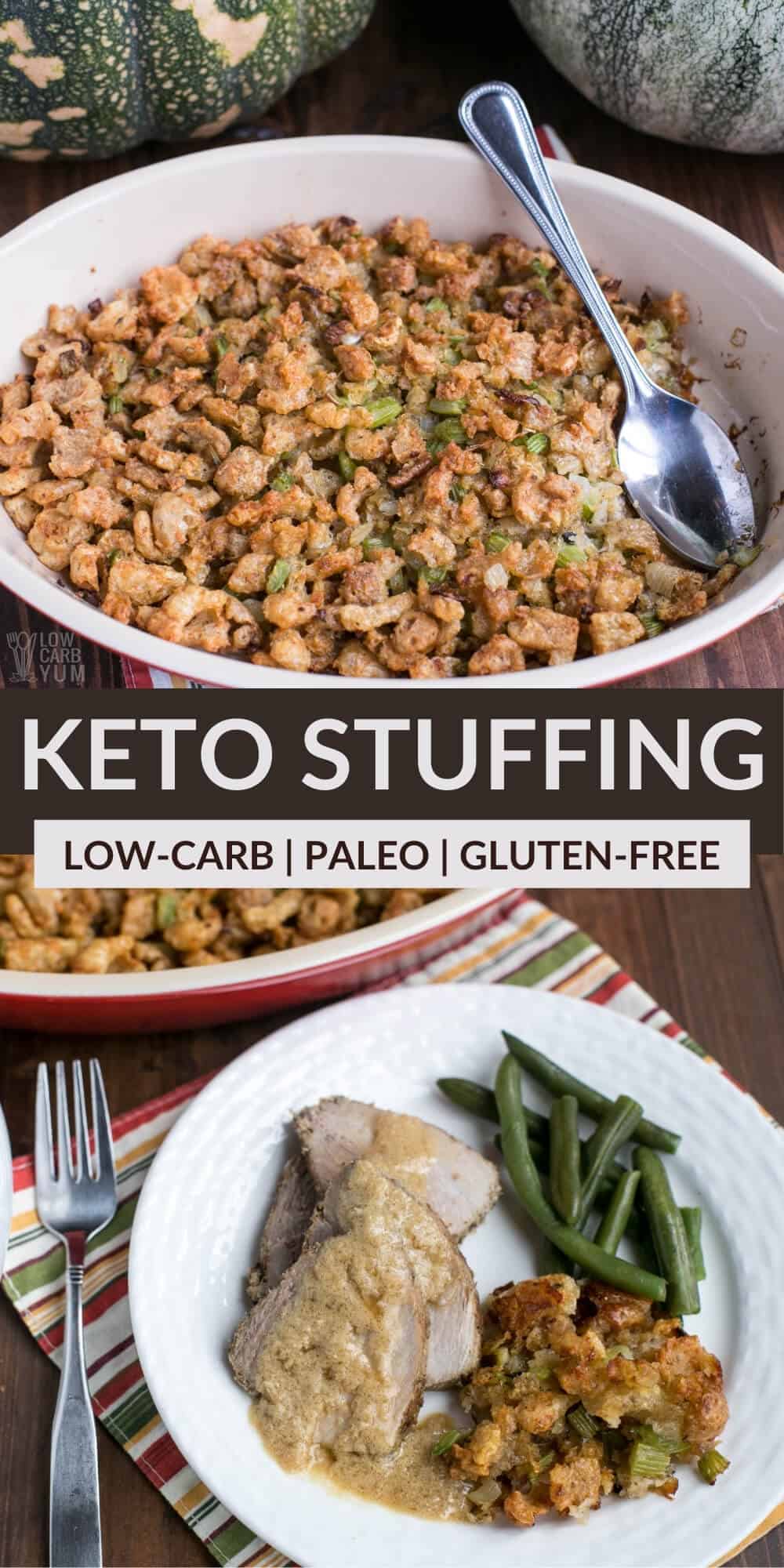 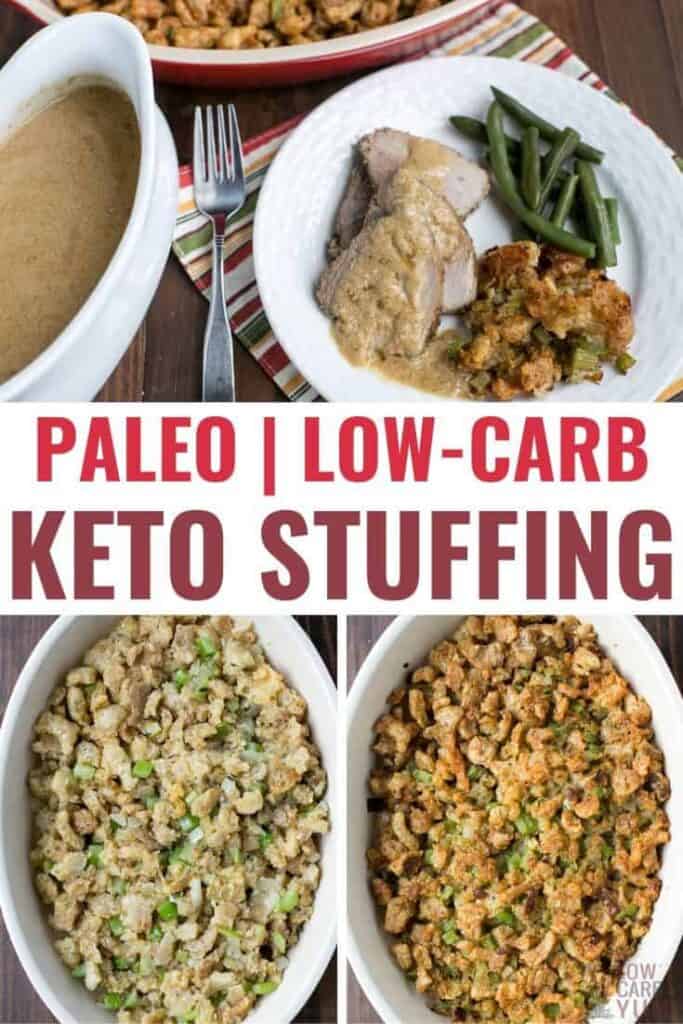 Don’t skip the Thanksgiving stuffing! This keto stuffing is full of flavor and incredibly easy to make. And, there’s no need to bake or buy keto bread thanks to a secret ingredient!

During the holidays, I really enjoy sharing delicious seasonal recipes. I believe most holiday dishes can be converted to low-carb or keto, like these yummy low-carb pies!

I want everyone to know that they can indulge in traditions while still making healthy choices. After all, no one wants to feel like they’re missing out on the holidays.

For me, one of those important traditional dishes is stuffing. I didn’t want to have to skip it at Thanksgiving. That’s why I created this low-carb stuffing almost a decade ago. And I’ve made it every single year ever since!

I’ve seen a lot of keto or low carb stuffing recipes over the years. Many seem way too complicated to me (even if they look delicious). When I engineered my recipe, I knew I wanted something that was easy to make.

Most low-carb stuffing recipes include making or buying low-carb bread ahead of time. Or, they use cauliflower in place of the bread. For me, this just isn’t quite the texture I want.

But, with this recipe, you get a texture and taste very similar to traditional high-carb stuffing. No bread baking involved!

You can also choose whether you want to bake this stuffing in the oven or if you want to prep a mix for an instant stovetop version. Both versions are outlined below.

Did you know that stuffing is only called 'stuffing' when it is put inside the turkey for Thanksgiving? If it is baked separately and served as a sidedish, then it is referred to as dressing instead.

This stuffing recipe will work as either. However, I did make a southern cornbread dressing recipe a while back as well. Check it out!

This keto stuffing has basically the same kind of ingredients as traditional stuffing. They are all very easy to find at the grocery store!

Use either unsalted butter or ghee to sauté the onion and celery.

Most types of traditional stuffing have both onion and celery. Red onions will have a slightly sweeter flavor, but red, yellow, or white will work.

The egg keeps everything together. It’s a very important ingredient and gives the stuffing a little added protein too.

Bone broth has a slightly thicker texture than chicken broth. You can use either bone broth or chicken stock.

I only used two types of spices in this stuffing - rubbed sage and thyme. These are also the main ingredients in poultry seasoning, so you can use that instead.

All the exact steps for this low-carb stuffing are in the printable recipe card at the bottom of this post, but first, here is a quick overview and more tips!

Sauté The Celery And Onion

In a large skillet over medium-high heat, melt the butter-flavored coconut oil (or butter or ghee). Add the diced onions and celery and cook until soft.

Next, break your pork rinds into crouton-sized chunks and add to the skillet. Stir to combine with the onions and celery. Remove from heat and allow to cool slightly before adding the beaten egg so it won’t scramble.

Once everything is well mixed together, stir in broth and let the pork rinds absorb the liquid. Once the broth has been soaked up, sprinkle on the seasoning and stir.

Stuff It In The Turkey

Finally, stuff into the chicken or turkey and cook like you would normal bread stuffing!

Since this is a traditional Thanksgiving recipe, serve it with your favorite turkey recipe! On the side, I highly recommend making some low-carb green bean salad and mashed cauliflower.

Now you have a complete Thanksgiving meal - all keto-friendly!

Before we get to the keto stuffing recipe, here are some questions people often ask about this low-carb recipe.

What can be used to replace herb stuffing on a keto diet?

Many high-carb stuffing recipes call for toasted bread chunks, stale bread, or croutons. You need something that soaks up the flavor while retaining a little crunch. So what better keto ingredient to use than pork rinds?

For the pork rinds in this keto Thanksgiving stuffing, I recommend buying from the brand Epic. They are a bit more expensive, but of higher quality.

Epic pork rinds are baked, not fried, so they have a lower fat content. I find this is best for the texture of the stuffing. Fried pork rinds will retain excess oil, which can seep into the stuffing while it bakes.

If you can’t find the Epic brand or are on a tighter budget, regular pork rinds are fine to use. If possible, try to find pork rinds that have a lower fat content.

Can you use seasoned pork rinds instead of stuffing?

Yes! If a casserole recipe calls for a stuffing mix, you can just add in seasoned pork rind pieces instead. And I’m going to share a seasoning blend that works well for this next!

How do you make a dried stuffing mix that is keto-friendly?

Did you grow up with the stove-top, instant kind of stuffing that came in a bag or a box? That’s the kind my family used to cook for Thanksgiving.

If you prefer the instant kind, you can actually make your own low-carb stuffing mix with pork rinds to cook on the stove!

You can make this homemade seasoning blend ahead of time, so it’s ready to go.

When you’re ready to make the stove-top stuffing, add 3 tablespoons of butter-flavored coconut oil (or butter or ghee) to a medium saucepan.

Pour in 1 cup of water and your pre-made seasoning mix, then heat until boiling. Once the water boils, reduce the heat and allow to simmer for about 5 minutes.

Next, add about 4 ounces of pork rinds (broken up like croutons) and stir. Cook for 1-2 minutes, using a fork to fluff along the way until the liquid is absorbed.

Finally, remove the saucepan from heat and cover. Let it stand for about 5 minutes, then fluff keto stuffing with a fork and serve.

What are some other keto alternatives to traditional stuffing?

I’ve seen a lot of recipes using cauliflower in place of the bread, so that’s an option if you want vegan or vegetarian stuffing. However, the taste and texture with cauliflower stuffing won’t be as close to the real thing.

If you have the time, you can make your own low-carb croutons using a quick and easy English muffin in a minute recipe. My friend Mira over at My PCOS Kitchen shows you how to make homemade croutons.

You can also add in nuts and sausage or even some sugar-free dried cranberries if you aren’t worried about the added carbs. But, out of all the low-carb alternatives, I believe pork rinds are the best!

Looking for other low-carb dinner sides to serve this holiday season? Check out a few of these favorites: 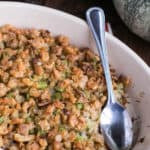 I used Epic Pork Rinds which are lower in fat than regular ones. Although you can use regular ones, I find the ones lower in fat work out better for both taste and texture. To change up the taste, you can add sausage and other seasonings. After adding the pork rinds, make sure the pan has cooled enough so the egg doesn't cook. The egg should be absorbed by the pork rinds and not turn into cooked scrambled eggs.

« How To Shop Keto at Costco
Southern Keto Cornbread Dressing »