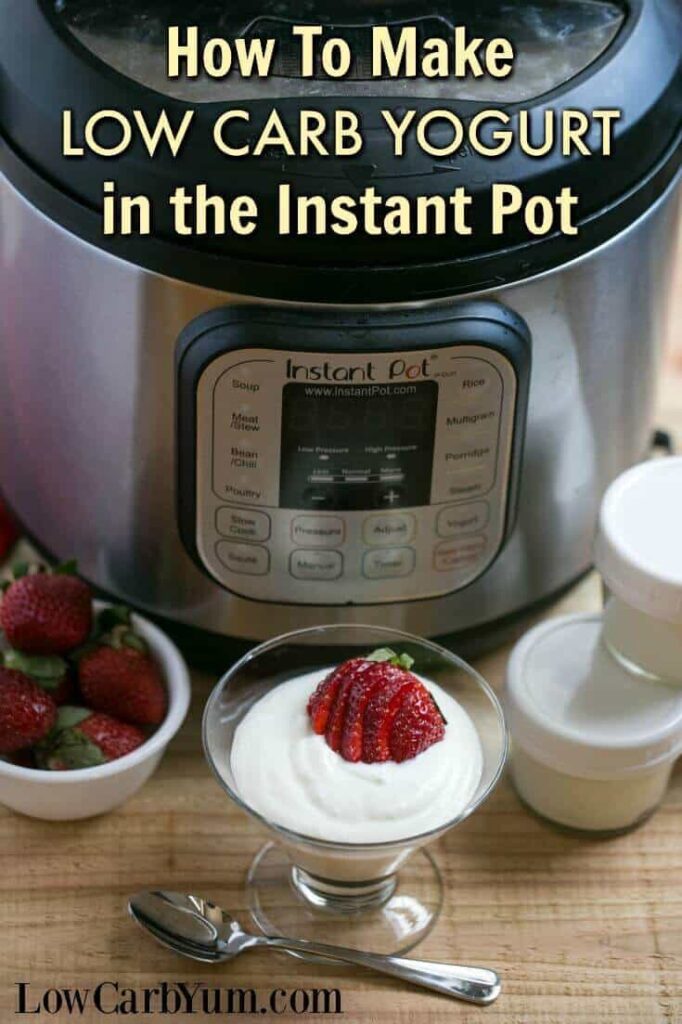 Did you know you can make your own delicious low carb yogurt using an Instant Pot? It's so simple even a beginner should have no trouble on the first try!

I had a half gallon of organic whole milk that had been sitting in my basement refrigerator for a while. Thankfully, organic milk seems to always have a "use by" date pretty far out.

My son had been coming home from college and eating cereal and milk. So, I stocked up on whole milk. But, he hasn't been around to drink it.

I decided to try making a batch of low carb yogurt since the expiration date was coming up in a few weeks. I used the electric pressure cooker method which is super easy!

Do you have an Instant Pot with the yogurt feature? If so, you must give this a try. It was so much easier than I thought it would be to make my own low carb yogurt.

The only ingredients you need are a half gallon of milk and two tablespoons of whole milk yogurt with active cultures in it. I had a container of Organic Stonyfield whole milk plain yogurt in the fridge which was perfect to use as a starter.

The Instant Pot makes it super easy to make your own low carb yogurt. All you do is dump your container of whole milk into the pot liner, put the lid on, then click the "Yogurt" button and use the "Adjust" button until "boil" is displayed.

The Instant Pot will then heat the milk up until it reaches 180°F. However, This Old Gal provided a very helpful tip. She recommends stirring the milk with a whisk in the middle of the boil cycle to ensure the liquid is evenly heated at 180°F. There is no pressure used when making boiling the milk, so you can open the lid as needed to give the milk a little stir.

Accurate temperature taking is important when making your low carb yogurt. You'll want to have a digital meat thermometer handy to make sure your milk is at the right temperature. If you don't reach the 180°F temperature and continue, you may end up with thin yogurt.

If the milk isn't at 180°F, you'll need to push the "Yogurt" button and "Adjust" button to continue the boil cycle until the temperature is reached. Once reached, you place the inner Instant Pot liner into a sink filled with cold ice water to drop the temperature down to 110°F.

Once the milk has reached 110°F, you add a little bit to your two tablespoons of starter yogurt to temper it before adding it to the warm milk. That keeps the cooler starter yogurt from curdling if it changes temperature too quickly.

The yogurt mixture is then added to the warm milk in the liner which is then placed back into the Instant Pot and the lid put on. Now, you set the pot to incubate the milk into low carb yogurt. And, the longer the better because more milk sugar will be eaten by the live cultures the longer it incubates.

Another tip I got from This Old Gal was that the timer counts up. So, when you set your incubation time (I chose 15:00), the timer will go to 0:00 and then start counting up to let you know how long it's been going.

I started in late afternoon and let my pot sit in the yogurt cycle overnight. I stopped the cycle the next morning after about 13.5 hours. When I lifted the lid, in the morning, I was thrilled to see that my thin milk had turned into thick yogurt.

Since we want low carb yogurt, it's best to strain out the whey so you end up with thicker Greek style yogurt. There are some carbs in the whey so straining it out ensures you'll get the lowest carb count.

Another tip I got from This Old Gal is to let the yogurt chill before straining. So, I let the freshly made yogurt sit in the refrigerator for several hours before putting it in a strainer.

I put the yogurt in a colander lined with cheese cloth over a big bowl. I let it sit like this in the refrigerator until I got almost 4 cups of liquid strained out of the low carb yogurt.

The result was a thick and creamy Greek style yogurt. It was very tart so I mixed in some vanilla stevia and liquid monk fruit to each serving which gave a nice sweet vanilla flavor!

If you think yogurt has too many carbs, think again! The labels on yogurt are typically inaccurate when it comes to carbs because it counts sugars that the cultures have consumed so they are not longer there.

To learn more about why yogurt is much lower in carbs than stated on the label, I recommend reading this article. I typically count about half the carbs on the label to be safe, but plain whole yogurt is so sour, it's safe to assume there's almost no sugar in it.

How to Make Low Carb Yogurt in the Instant Pot

Enjoy this easy homemade yogurt. And be sure to let us know what you thought of it by leaving a comment. You may also want to use it for making yogurt parfaits by layering it with my keto muesli cereal or my low carb granola. 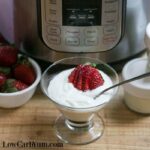 Author: Lisa MarcAurele
4.96 from 23 votes
Did you know you can make your own delicious full fat yogurt using an Instant Pot? It's so simple even a beginner should have no trouble on the first try!
Prep Time10 mins
Cook Time10 hrs
Total Time10 hrs 10 mins
Course: Breakfast, Snack
Cuisine: American
Print Pin Review Recipe Save Recipe View Collections Save Recipe
Servings 8 people
Calories 151

Adapted from This Old Gal NOTE: Actual carbs in the yogurt are lower than specified as most of the milk sugar has been consumed by the cultures. Therefore, effective carbs are typically half or less. See this article for more information on why  this is true.

© LowCarbYum.com
Unauthorized use of this material without written permission from Lisa MarcAurele is strictly prohibited unless for personal offline purposes.
Single photos may be used, provided that full credit is given to LowCarbYum.com along with a link back to the original content.
« Southwest Steak Salad with Spicy Avocado Dressing
Slow Cooker Crock Pot Beef and Broccoli »