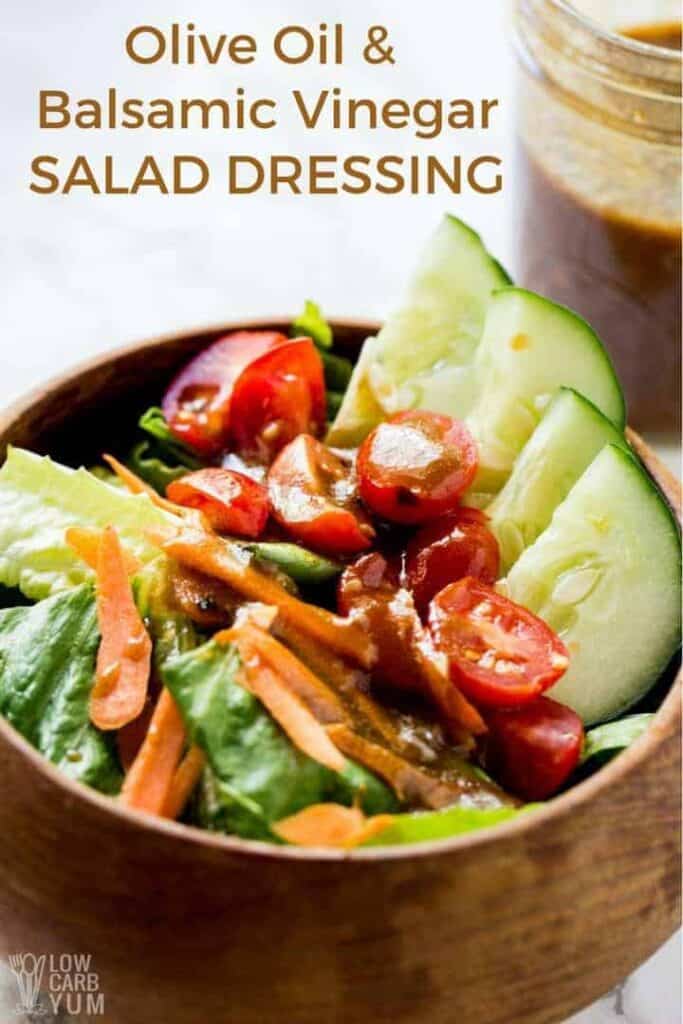 Conventional salad dressings are loaded with unhealthy carbs and calories. But this olive oil and balsamic vinegar salad dressing recipe is great for your health—but only if the ingredients are high quality.

Make Sure The Olive Oil You Buy Is Real!

Did you know that in Italy, there’s a special police force tasked solely with nabbing fradulent olive oil sellers?

Yeah, I couldn’t believe it either. I found out about this while watching this 60 Minutes segment. That’s why I’m careful to only use the real thing in my olive oil and balsamic vinegar salad dressing.

Before I watched the segment I was kind of aware that not all olive oil is created equal. I knew that organic extra virgin olive oil was the gold standard.

But I had no idea that olive oil fraud is so pervasive. In fact, in Italy, the mafia has taken over vast swaths of the olive oil trade.

And they’re not profiting from slinging high-quality, sublime-tasting olive oil. Instead, they’re watering it down.

They’re calling it extra virgin olive oil when in fact, it might not even be olive oil!

So before you rush out to the store for this olive oil and balsamic vinegar salad dressing, don’t just buy any bottle.

What to look for when buying extra virgin olive oil

When I buy a bottle of olive oil, I look for one that comes in a dark bottle. That’s the first rule.

Avoid any oils of any type that are either not in a very dark, opaque bottle.

The problem with clear bottles is that they allow light to spoil the oil. Olive oil, like most other oils, can go rancid pretty quickly.

Time, light, heat and oxygen are dietary oil’s greatest enemies. So stay away from the clear bottled product when buying ingredients for your olive oil and balsamic vinegar salad dressing.

I also prefer bottles to cans, even though cans are good at preventing light and air in. This is because cans are most often very large. By the time you get halfway down to the bottle of the can, the oil is no longer fresh.

Italian Olive Oil: The Best For A Salad Dressing?

And don’t get fooled into thinking Italian olive oils are the best. Or other oils from around the Mediterranean.

I used to think that Italy and Greece had the best extra virgin in the world. That might be true sometimes. But often, it’s not.

You already know why: corruption. And you don’t want to support that by making your own homemade olive oil and balsamic vinegar salad dressing.

Walk in to any supermarket. Pick up a bottle of extra virgin from Italy. Does it say exactly what region it’s from?

Does it have the harvest date? (If the harvest date was 2016, the oil is probably past mature and therefore on the verge of becoming rancid.) And an EU certification label?

Chances are, it won’t. And if it doesn’t you’re throwing your money away on very poor quality oil.

Does the bottle cost under ten bucks? And does it just say “imported from Italy” and that’s all the information divulged?Then it’s likely fake extra virgin olive oil.

Does the bottle say that the olives come from several countries? If so, don’t buy it.

The Best Product For Olive Oil and Balsamic Vinegar Salad Dressing Is….

Another reason I rarely buy imported olive oil is this….

By the time it gets to the States, after it’s been sitting in hot cargo containers, the oil has lost much of its quality. For this reason, I’ve actually started buying more olive oil made in the U.S. California produces some excellent olive oil.

And if you live near a Trader Joe’s, you’re in luck. They sell California Estate-grown extra virgin olive oil (EVOO) for a reasonable price.

Now, it might not be the best EVOO on the planet. But it’s very good quality for making olive oil and balsamic vinegar salad dressing considering the price.

Trader Joe’s California EVOO comes in a dark bottle. And it usually lasts me a week or so (depending on how hungry my husband and sons are).

An excellent resource for EVOO education is the California Olive Oil Council. I actually reached out to the Council and asked them if the EVOO Trader Joe’s sells meets their strict criteria.

They said that though the oil Trader Joe’s sells isn’t certified by the Council, it’s most likely a high-quality oil. The one knock on it is that the EVOO does not contain a “best buy date.”

But that doesn’t bother me because I know where the olives are grown. I also know what kind of olives they are (arbequina).

That’s the first sign that it’s not a good product. Secondly, although it says “imported from Italy,” it also contains olives from Spain, Greece and Tunisia.

Georgia On My Mind

Now here’s something that you’re probably not aware of when it comes to EVOO for making homemade olive oil and balsamic vinegar salad dressing.

The East Coast is home to amazing EVOOs. And I’m not talking about fine, imported bottles sold at gourmet stores. Turns out the Peach State has excellent olive oil!

Yes, Georgia Extra Virgin Olive Oil … it’s a thing! And it’s the first olive oil harvested east of the Mississippi since the 1800s.

Georgia Olive Farms is the brand to look for. They’ve only been producing EVOO since about 2011. But award-winning chefs love their EVOO.

If you want the best quality olive oil, see if you can buy what’s called olio nuovo EVOO. EVOO comes from the first pressing of the olives.

Olio nuovo is so fresh, it contains sediment. Unfortunately, many people, purely for aesthetics, are turned off by sediment.

That’s why most olive oil gets stored for a couple months or so, in order to let the sediment settle. But it’s this sediment which gives it the amazing, heart-healthy properties and exquisite taste!

Before I share the recipe, just let me add a quick note about balsamic vinegar. Look for one that has grape must as the primary ingredient.

Most balsamic vinegar contains wine vinegar as the primary ingredient. This is the cheap stuff.

I’ll share some more tips about buying balsamic vinegar in a future recipe. Until then, don’t buy fake olive oil and buy balsamic vinegar that’s thicker and more syrupy and contains grape must as the primary ingredient.

Enjoy your healthy low carb dressing! Be sure to check out my avocado cilantro lime dressing too. 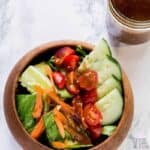 Author: Lisa MarcAurele
4.82 from 11 votes
Why buy prepared low carb dressing when it’s so easy to make your own? Here’s a simple recipe or olive oil and vinegar salad dressing that can be made in a couple minutes.