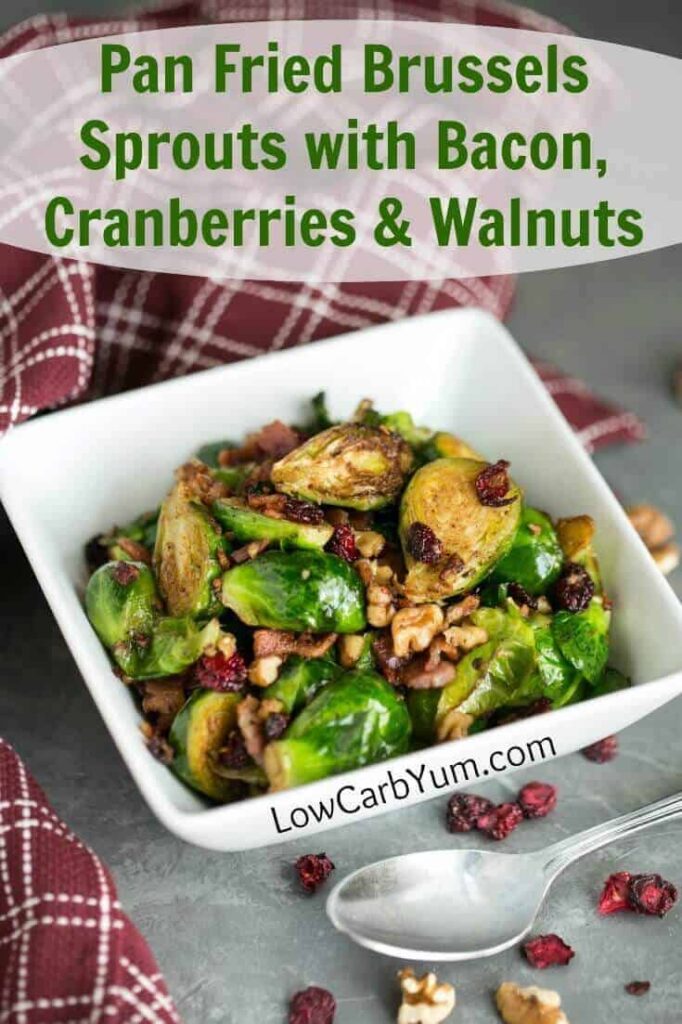 You'll win them over with these delicious pan fried Brussels sprouts with bacon and cranberries. Adding chopped walnuts makes it even better!

I was putting together some ideas for holiday meal side dishes and realized there's one low carb vegetable I've never written about. It's Brussels sprouts!

Often misspelled as brussel sprouts, they seem to have gotten their name from the city of Brussels where they were mentioned in market regulations in 1213. Otherwise, a better name may have been mini cabbage.

I thought I'd give these little green cabbage sprouts a try with an easy to make pan fried Brussels sprouts with bacon recipe. To up the flavor, I've also added in some unsweetened dried cranberries and chopped California walnuts.

The dish has some wonderful green and red tones which makes it a fantastic side dish to serve at Christmas. In fact, I've already included it on our family holiday menu.

This is a one skillet meal that starts with frying up a few slices of bacon until crispy. Then, the Brussels sprout halves are added into the bacon grease after removing the cooked meat.

Placing the sprouts cut side down in the pan ensures they get nice and brown on the flat side. Unsweetened dried cranberries are added next.

To make sure the pan fried Brussel sprouts are cooked tender, a little water is added and they are covered to cook for a few minutes. I added in some chopped walnuts and stir fried them until they were well toasted.

The walnuts are optional. And, those who have nut allergies can leave them out or replace the nuts with a sprinkling of sunflower seeds.

The cooked bacon is chopped up and added to the dish just before removing the dish from the heat. It adds more bacon flavor and a bit of crunch.

I find cooking the pan fried Brussels sprouts in the bacon grease gives them a much better taste than frying in oil. And, the bacon makes it unnecessary to add salt.

Although I've cooked regular steamed Brussels sprouts, this is the first time I've combined them with other ingredients. I have no idea why it too me so long to discover their deliciousness!

Now that I've given them a try beyond simple steaming, I'll be serving them a lot more often. Now I know why they are such a favorite ingredient around the holidays.

Cranberries and walnuts go great together. I blend them into my no mayonnaise chicken salad which uses mashed avocado in place of the may.

I was actually planning to post a low carb side dish recipe round-up today. But, I'm holding that post off until tomorrow so I can share this recipe instead.

And, since these pan fried Brussels sprouts with bacon, cranberries, and walnuts are such a delicious side dish, they'll be included in the round up. So, be sure to check out that round-up after it's published.

If you have family members and friends who dislike Brussels sprouts, this tasty recipe may just win them over. Why not make it for a holiday meal to share?

I'm actually curious to see how my own family will respond to this yummy side dish. Since I'll be making it to share, I will make a double batch.

However, it may be difficult for me not to hog it all. I do love Brussels sprouts, and the addition of bacon, cranberries, and walnuts makes it so much better.

Do you included these tasty little cabbage bites in your holiday meal? If so, I'd love to know you like to cook them.

I plan to experiment some more with Brussels sprouts. My next recipe will try roasting them in the oven rather than pan frying. 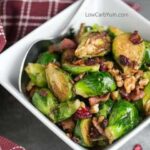