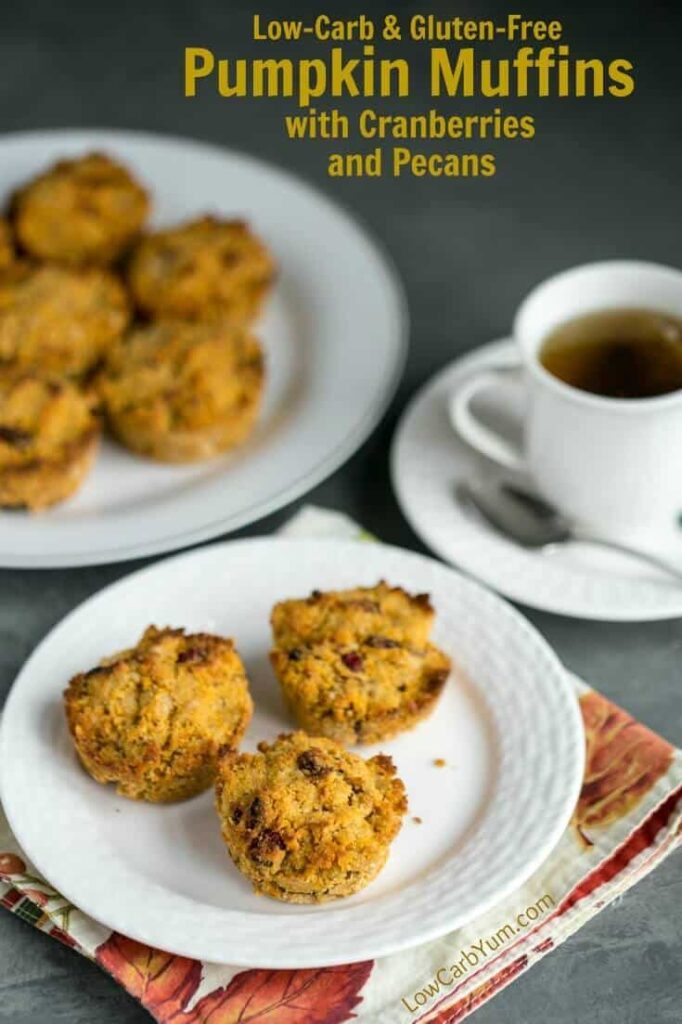 During my time off from work for the Thanksgiving holiday I had some time to experiment in the kitchen. One of the things I've been testing are the low carb sweeteners made by LC Foods.

I've actually been a customer of LC Foods for a while. But, I've only tried a couple of their sweeteners. The inulin based ones are what I prefer to use in my ice cream recipes.

Recently, I was offered some samples of the low carb sweeteners to try. I tested out the White Sugar Sweetener with Erythritol in these low carb pumpkin muffins.

Although I have a similar muffin recipe here, I wanted to redo the recipes using a mix of almond flour and coconut flour. And, the amount of pumpkin needed was just about what I had leftover from making my mock sweet potato casserole.

My original low carb cranberry pumpkin muffins were made with all coconut flour. And, they didn't add any nuts.

I find pecans are a wonderful addition to the pumpkin and cranberry flavors. So, although I thought the original recipe was good, this one is even better.

Another change that made was using White Sugar Sweetener with Erythritol by LC Foods. My older recipe calls for a stevia erythritol blend along with a brown sugar substitute.

What I found with the LC Foods erythritol sweetener is that a more rounded sweet taste was achieved using less of the erythritol blend. The reason is likely because it uses a blend of four low carb sweeteners rather than the usual two.

You may be wondering what sweeteners are used in the LC Foods white erythritol sugar alternative. It's a blend of erythritol, inulin chicory root fiber, stevia, and monk fruit.

The combination of several sweeteners results in a synergistic effect which provides a better overall taste. And, when it comes to sweetening low carb treats, I've found that it's always best to use more than one sugar alternative.

Most erythritol based sugar substitutes have a distinctive cooling effect. This is not noticeable at all with the LC Foods white erythritol blend.

And, with the sweet taste of monk fruit added, the result is a taste that's more like real sugar. In fact, I find that the more sweeteners used, the less you need overall.

The low carb pumpkin muffins with cranberries and pecans were very moist and flavorful. I also found them to be very filling.

Due to the synergistic effect of the multiple sweeteners, I think the amount of the LC Foods erythritol blend could be reduced to ⅓ cup or less.

So, if you've been searching for some better tasting low carb sugar substitutes, give LC Foods a try. I think you'll find that their sweetener blends are one of the best tasting you can buy. 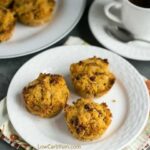 Pumpkin Muffins with Cranberries and Pecans

© LowCarbYum.com
Unauthorized use of this material without written permission from Lisa MarcAurele is strictly prohibited unless for personal offline purposes.
Single photos may be used, provided that full credit is given to LowCarbYum.com along with a link back to the original content.
« Pan Fried Brussels Sprouts with Bacon and Cranberries
Italian Almond Macaroons - Gluten Free »