A low-carb pumpkin lasagna with spinach and meatza noodles. The pasta noodles in this dish have been replaced with pre-baked seasoned ground beef.

While driving home from work this week, I’ve noticed that it’s really starting to look like fall outside. The leaves on the trees are a multitude of shades from red to green and the leaves are beginning to fall along the road.

I was thinking to myself what a pretty time of year it is right now in New England. I really enjoyed the summer weather, but I am looking forward to the change in season. It’s hard to believe that the holidays are fast approaching.

As you may or may not have noticed, I really like pumpkin. We did attempt to grow these gourds one year in the yard, but the plants didn’t like the spot we picked out for them.

I think the soil conditions just weren’t right as there was plenty of sun in that part of our yard. Maybe we will try planting some pie pumpkins next year so I can freeze a supply for my fall and winter baking.

The first thing that comes to mind when you talk about pumpkin as a food is usually pumpkin pie or some other sweet dish. However, I came across a recipe for pumpkin lasagna a couple weeks ago that I really wanted to try.

I have made a pumpkin bean soup previously. But, other than that; I haven’t really used pumpkin in a main dish.

Low carb lasagna noodles are available, but I have started to get away from using wheat products as I believe there are many benefits to eating gluten free. Therefore, I decided to try a “meatza” layer in the lasagna in place of the noodles where I used meat part of Spinach Tomato Meatza Pizza Recipe.

I made a few other changes to the original recipe to suit my taste and lower the carbs. Since there aren’t any actual lasagna noodles in this dish, some may argue that it’s really a casserole versus true lasagna.

However, it looks and tastes like lasagna using a pumpkin sauce rather than the traditional tomato based sauce. Therefore, I have kept the title of this recipe as a lasagna rather than casserole.

How to make a savory pumpkin lasagna

Before assembling the lasagna, you’ll need to have your meatza ready. To cook the meatza “noodles”, I pressed a meatloaf mixture into a standard 18×12 jelly roll pan then baked it in the oven for about 20 minutes. Then, I cut the cooked meatza up in rectangular pieces which was enough for two layers in my 9×13 baking pan.

You’ll also need the fresh spinach wilted down. To do this, I simply cooked it in a large pot with olive oil. (photo 1)

The pumpkin sauce is made next. It’s just a blend of canned pumpkin puree, almond milk, and seasonings. (photo 2)

Once the meatza, spinach, and pumpkin sauce have been prepared, it’s time to assemble the casserole. First, a half cup of the sauce in spread into the bottom of the pan. Then, it’s topped with half the meatza pieces and half the remaining sauce. (photo 3)

The next layer is spinach. It’s then topped with half the ricotta, half the mozzarella, and half the parmesan cheese. The layers are then repeated. (photos 4-8)

Finally, the lasagna is baked covered at 375°F for 30 minutes. Then the cover is removed and it’s baked an additional 10 minutes or until the cheese is melted and browned.

Notes on the recipe

I used a large bowl of washed and dried baby spinach which was about 6 cups fluffed up. It wilted down quite a bit after cooking in the hot olive oil.

The cheese was quite brown on mine because I did not have it covered at all during baking. I should have only baked it uncovered for about ten minutes at the end. So this was added to the final recipe.

Enjoy this delicious savory fall lasagna! And be sure to leave a comment let us know what you think if you do give it a try. 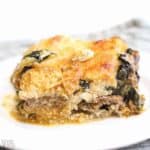 Baking the meat into thin meatloaf pieces is what holds the lasagna together. The meat should be pressed into a rimmed baking sheet to be as thin as possible. To prevent over browning the cheese, cover the casserole pan with foil while baking. Then remove the foil during the last ten minutes of baking to brown the cheese.