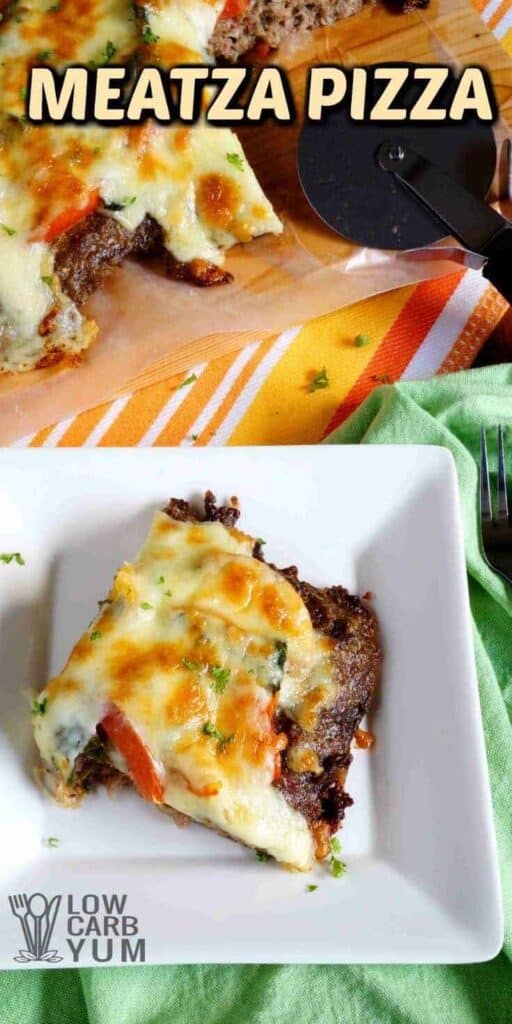 I was in the mood for some yummy low carb pizza. But, I wanted to try something a little bit different than the standard bread like pizza crust.

You may have heard of a meat crust pizza referred to as Meatza.  I decided to use tomato slices instead of sauce and added some chopped spinach to make this spinach tomato meatza pizza.

If you have a favorite low carb paleo meatball recipe, I’d give it a try for the crust because my crust tasted similar to a meatball. Or, you could use either my low carb meatball or meatloaf recipe.

I’m not sure where the idea of meatza came from, but it really is a novel idea. It’s a perfect way to make low carb pizza crust. Just grab your favorite ground meat, season it and roll it out into a dough.

The flavor combinations are endless for this meaty low carb crust. Simply change the toppings to customize it to your liking. I think a bunch of low carb vegetables would be delicious on top of the meatza pizza crust.

I think it would be a lot of protein to put meat toppings on a meat based low carb crust. I prefer using the crust for a cheese or vegetable pizza. That way, you are getting a more complete meal.

Of course, the choice is ultimately up to you. And, you can certainly put pepperoni or sausage on the meatza pizza crust. But on a keto diet, most find it’s optimal to eat moderate protein so you may not want to overdo it.

Some might call this a flat meatloaf covered with pizza toppings. So, regardless of what it’s called. I just think it’s a delicious low carb meal that really satisfies.

You serve meatza pizza by the slice so you don’t even need a fork to eat it. Just pick it up in your hands and enjoy each cheesy slice.

It doesn’t matter what shape you make either. A jellyroll pan is nice to use for a sheet pizza. But, you can also use a pizza pan for the traditional round pie shape.

Next time, I will try using low carb pizza sauce and different toppings. However, I thought this paleo friendly meatza pizza was excellent with the tomatoes and spinach.

This is a great way to make a low carb pizza crust without having to bother with a flour based crust.  However, if you’d prefer a more traditional bottom, check out my coconut flour or cauliflower pizza crust recipes.

You can also make a chicken pizza crust if you’d rather use a blander ground meat.

What will you put on top of this meaty pizza crust? Try a variety of vegetables for a veggie lover’s pizza. 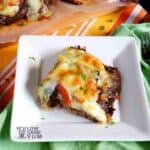 Use cheese alternative for paleo. Net carbs per serving: 3g