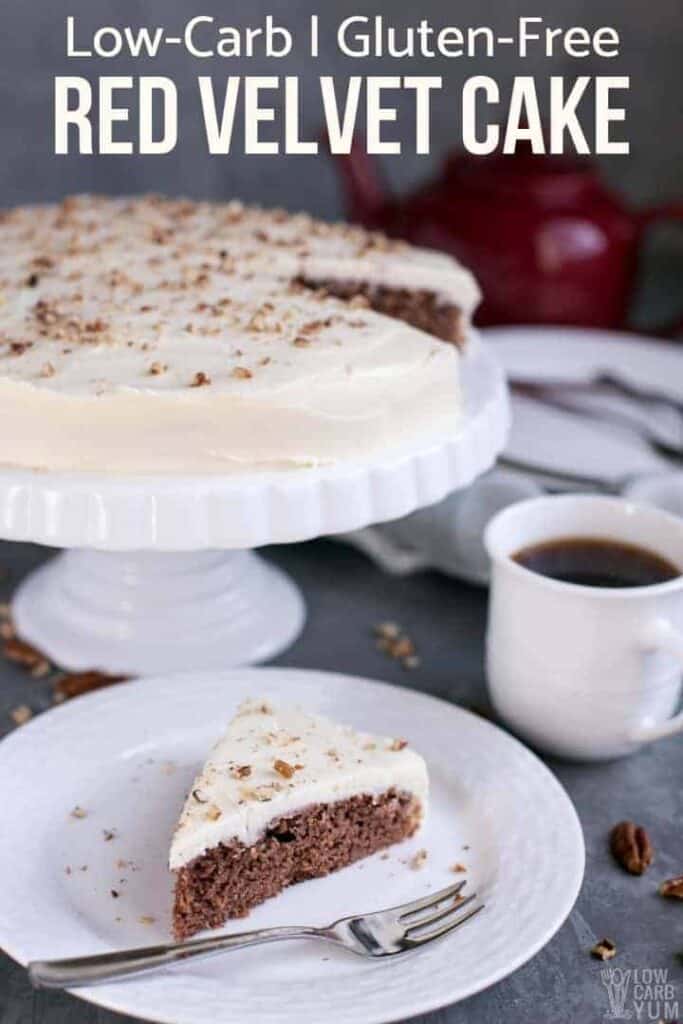 An easy to make gluten free and sugar free red velvet cake that's made from scratch. It's made with low carb flours and topped with a keto friendly cream cheese frosting.

The holidays are a time when I like to bring out my special low carb desserts. Some of my favorite treats to enjoy include keto cheesecake, white chocolate truffles, and gluten-free peanut butter blossoms.

I like to celebrate special days like holidays and birthdays with a slice of cake. And I love cream cheese frosted cakes like carrot cake. But I still haven't posted a low sugar recipe for that one yet.

However, I've had a recipe for my other favorite cake included on this site since 2012. It's my sugar free red velvet cake. And this week, I reworked the recipe to make it even better!

You see, when I first created the recipe, it used a product called Carbquik. It's a low carb biscuit and baking mix that uses a wheat based low carb flour known as Carbolose flour. Since I've been avoiding gluten, the old recipe needed to  change. That's why this gluten free red velvet cake has replaced that old recipe.

How did I change the recipe to make it gluten-free? Well, it took a couple tries. I ended up replacing the Carbquick with almond flour. But, after my first attempt resulted in a flat dense cake, I ended up increasing the amount of almond flour and baking powder.

In order to get a lighter and fluffier cake without the low carb baking mix, I needed to up the flour used and increase the leavening agent. Another ingredient that can make a gluten-free cake made with almond and coconut flour have a lighter texture is whey protein isolate. But I decided not to add that since it's a bit pricey and not really needed.

How to make a gluten-free red velvet cake keto friendly

My new sugar free red velvet cake recipe is very similar to the original recipe. The main difference is using only gluten-free flours and adding a little more baking powder. I also lowered the sweetener amount as I prefer things a lot less sweet these days than in my earlier days of low carb.

I start out by beating butter and sweetener together until the mixture well blended and fluffy. Then I add in some eggs and stir in a little vanilla extract. Next, I work on the dry mixture.

In a separate bowl, I mix up some almond flour, coconut flour, unsweetened cocoa, baking powder and salt. Next, I add the dry mixture into the wet mixture in a couple batches. I also add in a little sour cream or yogurt which makes the sugar free red velvet cake moist.

Too get a deep red color, I'll add up to ¼ teaspoon of red gel food dye. I've tried using natural based food coloring like beet powder, but the color isn't as strong. Most of the time, I don't bother with food dye as it's for looks only.

When I first started to bake low carb cake recipes, I had a lot of trouble getting the cake to release easily from the baking pan. That's why I started buying non-stick silicone cake pans. Even if not greased well, my cakes pop right out.

However, if you don't have a silicone cake pan, you can line the bottom of your regular pan with parchment paper. That will prevent the bottom of the cake from sticking. So all you'll need to do is run a knife between the side of the cake and the pan to get the cake to release easily.

I typically grease and dust the bottom of the pan with a little cocoa powder. Once the pan is prepared, the cake batter is spread into it evenly. Then, it's put into a 350°F oven for about 25-30 minutes. I let the cake rest on a rack in the pan for about 15 minutes before removing it from the pan. Finally, I allow the cake to cool completely on the rack before adding a frosting.

I use a basic keto cream cheese frosting. It's a combination of cream cheese, butter, powdered low carb sweetener, and vanilla extract. In the past, I've used powdered erythritol with a little stevia extract powder for frosting recipes.

To make the frosting, I beat together the cream cheese and butter first. Then, the sweetener is beat in until the mixture is fluffy. Finally, I mix in the vanilla extract.

Thoughts on the Recipe

I thought this low carb sugar free red velvet cake tasted very close to a regular high carb one. Next time, I may double the recipe to make a regular two layer cake.

To dress up the cake, I sprinkled chopped pecans over the top. But this could be left out or something else like chocolate shavings can be used. Or, make a little extra cream cheese frosting for piping along the edges.

After making this yummy keto friendly gluten free red velvet cake, I realized I need more homemade cake recipes. But, I do have a couple popular recipes, namely my low carb chocolate cake and a blueberry lemon pound cake.

Of course, you don't want to eat low carb cakes too frequently. Eating foods with a sweet taste can trigger overeating even when made with sugar alternatives. So, eat your low carb treats in moderation. And, be sure to stick to portion sizes and freeze any extras for later.

I hope you enjoy this revised cake recipe. It's a healthier option for celebrating special occasions. And if you like spice cakes, you'll want to try my low carb carrot cake recipe too.

You may also want to try a creamy keto tres leches cake made with a whipped cream frosting. 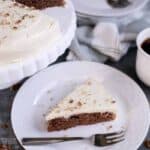 Makes 1 single layer cake (12 slices). Recipe can be doubled for a two layer cake with slices made thinner. Original recipe called for Carbquik which isn't gluten-free. If desired, ⅓ cup Carbquik can be used in place of the almond flour along with reducing baking powder to only ½ teaspoon. The original recipe also called for about twice the sweetener so feel free to adjust the sweetener based on personal preference. Beet powder is a natural red food dye that can be used in the cake. However, the carbs will need to be accounted for. I prefer to leave the dye out as it's only for looks and isn't essential to the recipe.