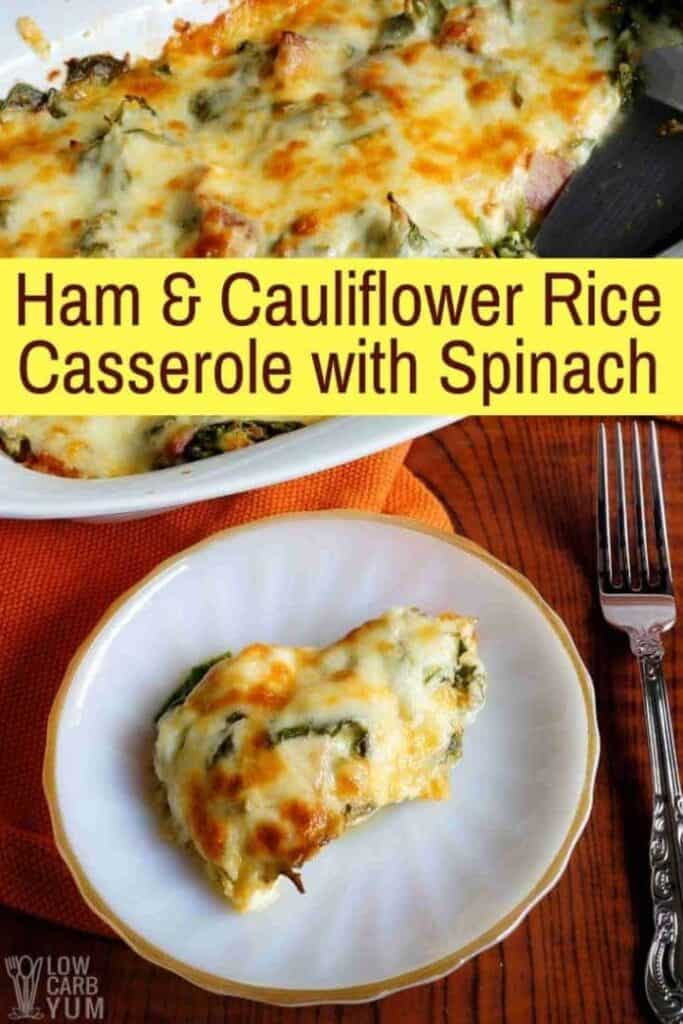 A keto friendly low carb ham and cauliflower rice casserole recipe. It's a great to use up any leftover ham from the holidays. Easy and delicious!

Like a lot of people, we generally serve ham at our holiday dinners. I've already got my ham ready to go in the refrigerator and I'm planning to make my keto cauliflower mashed potatoes with spinach.

But I still have leftovers in the freezer from the huge ham I roasted on Easter. Thankfully, I used a vacuum sealer to keep those leftovers fresh a lot longer by preventing freezer burn.

Well, now that Easter has arrived I figured I better start using up that frozen ham meat. So I started searching for a good recipe.

I ended up making this cheesy ham and cauliflower rice casserole recipe with spinach. It's adapted from a dish credited to Martha Stewart. One of the changes I made was to substitute cauliflower for rice in the casserole. Although I used fresh, frozen or dehydrated cauliflower rice should work too.

The original recipe used Gruyere cheese which isn't readily available so I used a mix of sharp cheddar and mozzarella cheeses. I also cut back on the spinach and omitted the onion.

Ingredients to make a ham and spinach rice casserole

For a healthier dish, this ham and rice casserole uses riced cauliflower instead of regular white rice. And it adds spinach which ups the nutrition with a healthy leafy green vegetable.

I used fresh baby spinach leaves. But frozen full leaf or cut spinach can be used as well. You'll just want to squeeze as much water out of the spinach as possible before adding it.

The recipe calls for about ½ pound of chopped cooked ham. So it's a great way to use up those holiday leftovers. We had a thinly sliced spiral ham so I just chopped the slices up. You can also used cubes pieces of cooked ham.

Other ingredients in the dish include almond milk, shredded cheese, eggs, and some seasonings. I also used a little dry white wine. But the cooking wine can be replaced with vinegar, lemon juice, or chicken broth.

How to make the ham and cauliflower rice casserole

If using frozen spinach, you'll want to squeeze out as much of the water as possible. Fresh spinach can be used as is.

The spinach is then combined with the cauliflower rice, almond milk, eggs, and most of the shredded cheese along with salt and pepper. It's then set aside.

Garlic is cooked in hot olive oil until fragrant then the wine (or substitute) is added to the garlic and cooked for about 3 minutes. The chopped ham is then added and cooked until it warmed.

The ham is then added to the spinach mixture and spread into a small 7x11-inch casserole pan. It's then topped off with the reserved shredded cheese and baked at 375°F for about 25 to 30 minutes.

You'll get about six good size servings from the cheesy spinach, ham ,and cauliflower rice casserole recipe. If you need more servings, the recipe could easily be doubled and baked in a bigger 9x13-inch baking pan.

It's best to serve the casserole fresh out of the oven. But leftovers are great reheated in the microwave or conventional oven and they last for several days in the refrigerator.

The casserole makes a complete meal. But it also goes well with a cup of romaine lettuce soup or a tossed salad.

If you are looking for other delicious low carb casseroles to use up leftover ham, you can check out my Cheesy Cauliflower Ham Casserole and my Ham and Cheese Strata recipes. 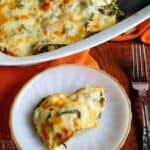 Frozen spinach should be thawed with most of the water squeezed out. Fresh spinach can be used as is. The original recipe used Gruyere cheese. Any suitable cheese can be used in place of the cheddar and mozzarella if desired. Dry white wine does have carbs from the grapes. To reduce carbs, the cooking wine can be replaced with a lesser amount of vinegar, lemon juice, or chicken broth.