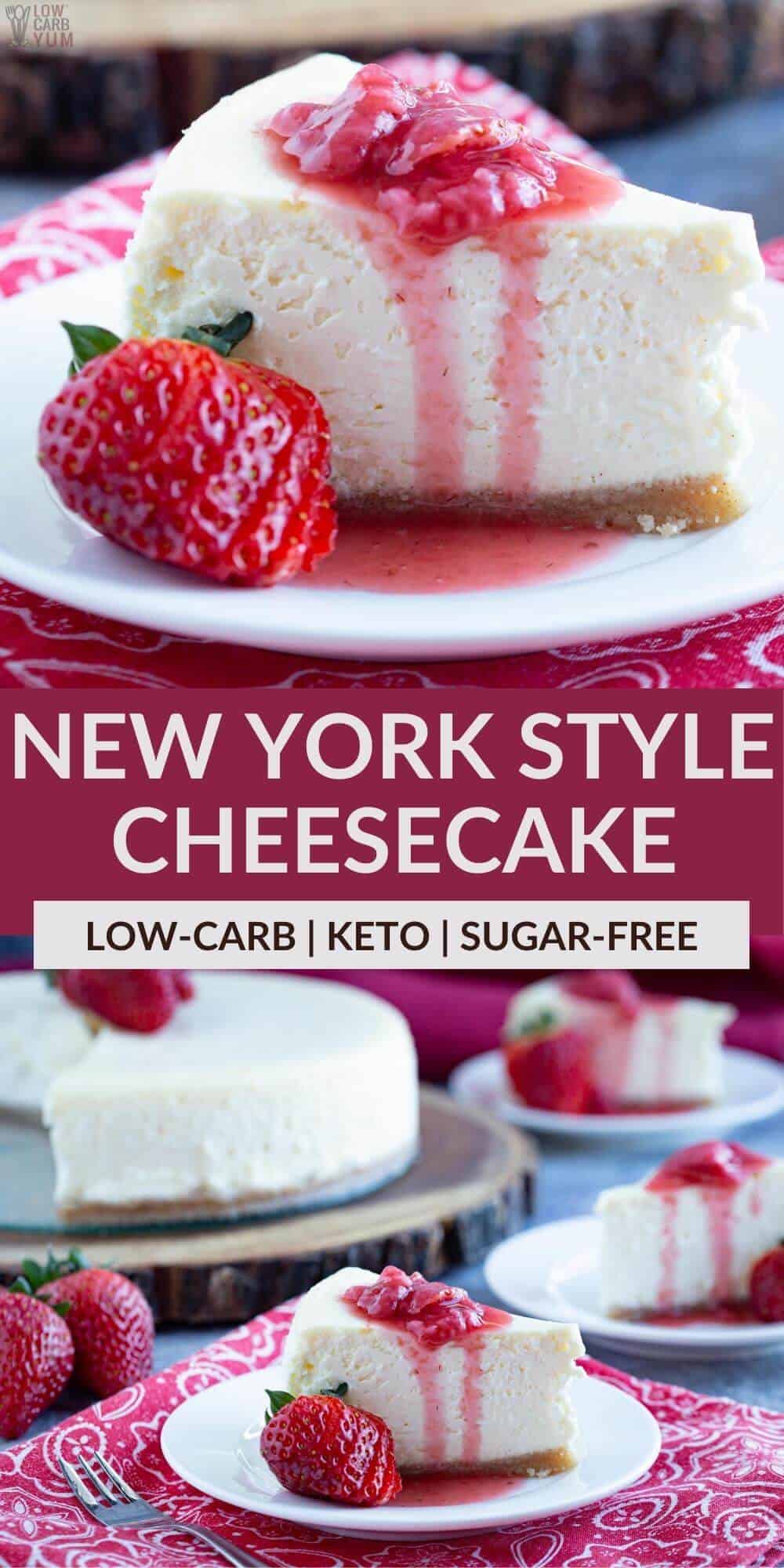 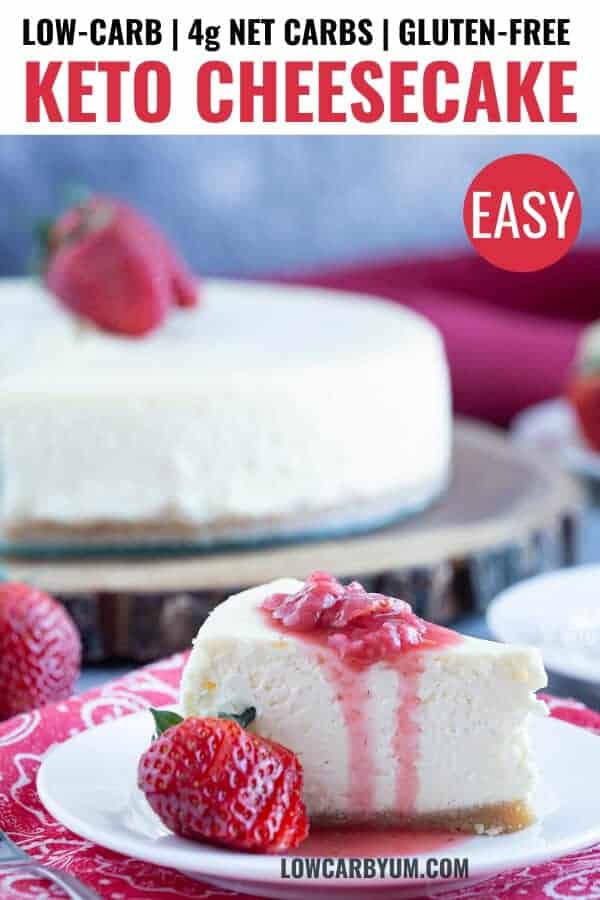 This rich and creamy New York style keto cheesecake is easy to make, uses simple ingredients, and tastes JUST like the real thing. No one will ever guess it’s a sugar-free and low-carb cheesecake!

This creamy, indulgent keto dessert is perfect for a low carb diet! The main ingredients, like cream cheese and eggs, are already keto friendly. The other advantage is that you can really play around with the sweetness level.

Personally, I prefer less sweetness. Some desserts need a lot of sweetness to get the taste right, but not cheesecake. The recipe is very flexible in that area.

I think you’ll be surprised how easy this keto cheesecake recipe is to make! Cheesecake may seem like a more elaborate dessert, but it’s actually very straightforward.

The good news about this creamy cheesecake is that it's made with common every day ingredients. You may even have everything you need in your kitchen.

The buttery crust is made with either almond meal or almond flour. If you don't have any almond flour on hand, just finely grind roasted almonds in a food processor. I like to use sliced almonds because they can be made into almond meal quickly.

You'll need a low-carb sugar substitute for both the crust and cheesecake filling. It's best to use a granulated sweetener in the crust mixture. But you can use pure monk fruit or stevia in the cheesecake batter.

To get the same flavor as a regular graham cracker crust, you'll need to add cinnamon to the almond flour crust.

A fat is needed to bind the keto cheesecake crust ingredients together. Although you can use coconut oil, real butter gives it a nice buttery flavor.

You'll want to use full-fat cream cheese because the keto diet is a high fat eating plan. The additional fat also makes a more delicious cheesecake.

When you bake cheesecake, the batter needs eggs to give it a rich smooth texture. But if you add too many eggs, the top is more prone to cracking.

For the best cheesecake taste, vanilla is added to enhance the flavor. It also adds sweetness without any additional sugar substitute.

To soften the texture and add moisture, you'll want to add either sour cream or heavy cream. Sour cream is traditionally used for a New York cheesecake.

Note: Check out the recipe card at the bottom for a full list of ingredients used to make this dessert recipe.

For best results, I recommend letting all of the ingredients come to room temperature before you start prepping. Then simply prep the crust, make the filling, and bake.

First, combine the almond meal, sweetener, and cinnamon. Then stir in melted butter and press the mixture into your pan.

Set aside. The crust will bake with the cheesecake, it doesn’t not need to bake separately (unless you want an extra-crispy crust, in which case you could pre-bake it for 8-10 minutes)

Start by beating the softened cream cheese in a large mixing bowl with an electric mixer until light and fluffy. Add in the sweetener and beat until mixed in. Then beat in each egg, one at a time.

Add in the extracts and beat in the sour cream until incorporated. Pour mixture into cheesecake pan with prepared crust.

Bake in a preheated 325°F oven for about an hour and fifteen minutes or until the top is slightly browned and the edges are set. The center of the cheesecake filling should still be a little jiggly.

Turn off your oven and leave the cheesecake in the oven with door ajar for an hour. This helps the temperature adjust gradually.

Remove from the oven and allow the cheesecake to cool completely on a wire rack. Place in the refrigerator and allow it to chill for at least 24 hours before serving.

This delicious keto cheesecake is perfect all on its own. But it also goes so well with sauces drizzled on top!

My personal favorite is strawberry sauce. It’s a great balance of sweet and tart flavors. Plus the red looks beautiful on the white cheesecake.

If you’re looking for an easy and low-carb fruit sauce, check out my strawberry sauce for cheesecake recipe. It’s amazing over pancakes or mixed into yogurt.

Other berry toppings like sugar-free blueberry syrup or raspberry sauce taste great on top too. You can also drizzle sugar free chocolate syrup over each slice.

Let's address a few common questions others have asked about the recipe. If you have a different question, leave a comment to get the answer.

If you replace the sweetener and use a low-carb crust, you can make just about any cheesecake keto.

My favorite way to sweeten cheesecake is with a mix of sweeteners. This helps eliminate any after-taste from one particular low carb sweetener. In my opinion, the best mix is a monk fruit and erythritol blend mixed with a stevia and allulose blend.

How does it taste?

This recipe tastes JUST as good as a regular cheesecake! It’s just the crust and the sugar that make traditional cheesecake high in carbohydrates. That’s why you won’t be able to tell the difference between this 4g net carbs per serving version and a high carb one!

If you plan to eat all of it, simply store in the fridge. It will definitely keep for 1 week, and some readers have reported that it was fine after 2 weeks!

To store longer term, you can place it in the freezer for at least 3 months. For easy serving, I recommend freezing in single serving slices.

Then, when you’re ready to thaw a slice, place it in the fridge for about 3-5 hours. If it’s not quite soft enough, you can also let it sit at room temperature for about 30 minutes before serving.

Looking for more keto dessert recipes made with cream cheese? Check out a few of these popular no bake cheesecake recipes: 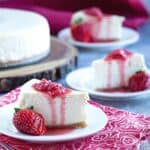 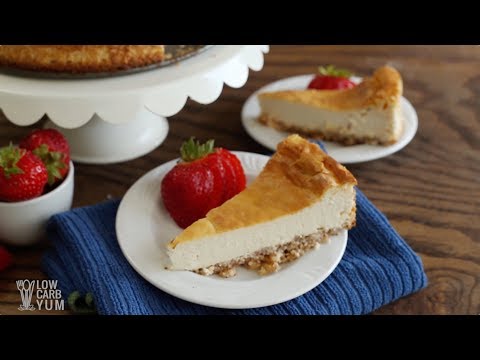 Crushed low carb cookies are perfect for using in the crust or crumbling into the filling. Just sub crushed cookies in place of the almonds, sweetener, and cinnamon! I find ¾ cup sweetener is just right. But those just getting started on keto may want to increase the amount up to 1 and ½ cups Tips to prevent the cheesecake from cracking: