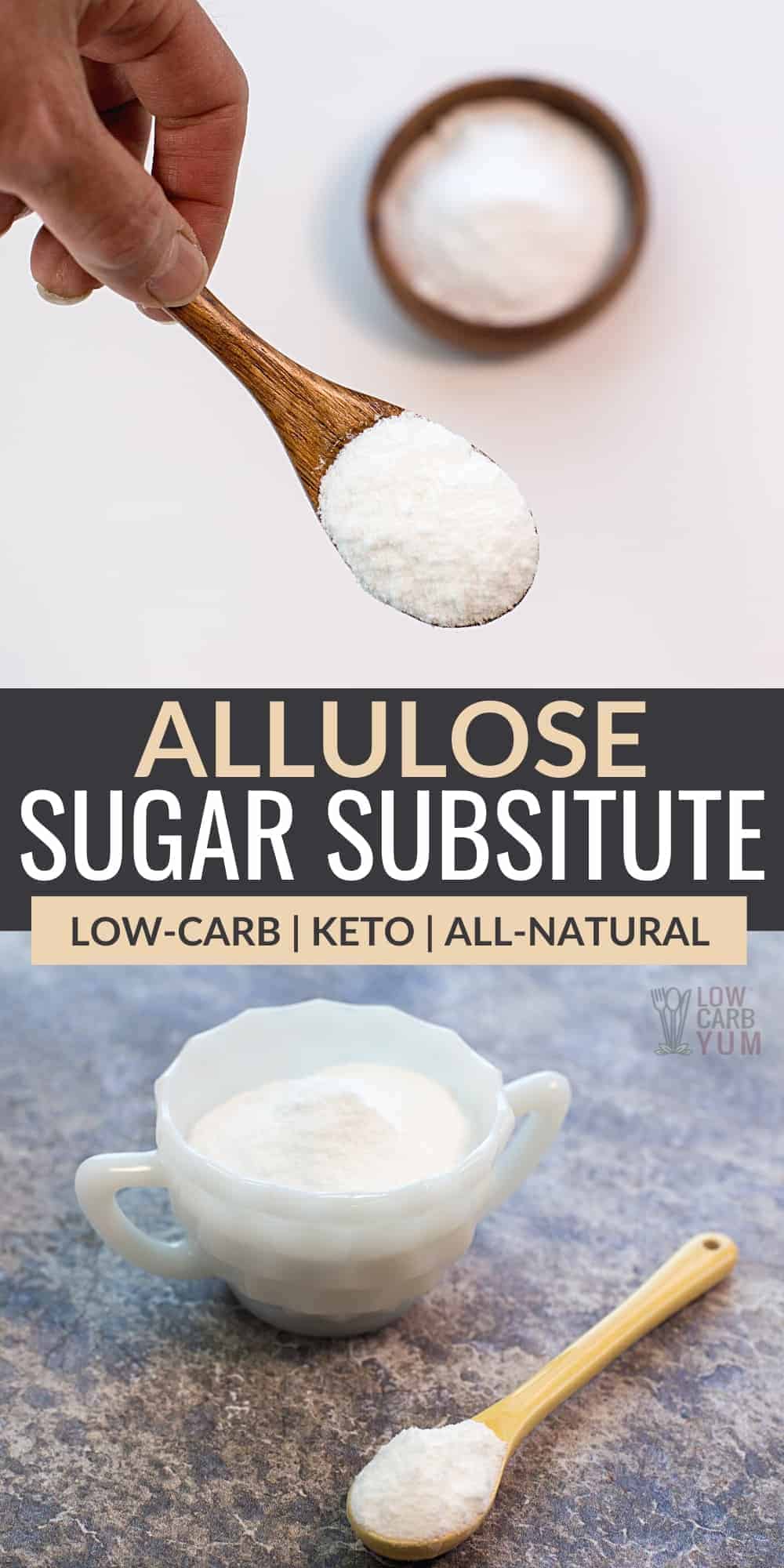 Learn everything you ever wanted to know about allulose sweetener on the keto diet. This is one of the most popular low-carb sugar substitutes - and here's why!

The more I learn about low-carb sugar substitutes, the more I want to share this knowledge with you. Everything I learned about erythritol, monk fruit, and stevia was so informative that I decided to research another popular alternative to table sugar.

Allulose sweetener tastes sweet and is actually pretty popular among those that are looking to bake with a sugar-free alternative. It is used in a lot of low-carb food products and recipes.

In this guide, I’ll share everything you ever wanted to know about it (including what it actually is and where it comes from).

Note: Scroll down to the end to find some of my favorite recipes to make with this sugar alternative.

One of the least talked about keto sugar alternatives has to be allulose. You just don’t hear about it as often as monk fruit extract, steviol glycosides, or sugar alcohols like xylitol or erythritol.

This guide is going to introduce you to the versatile sweetener. By the end, you’ll know more about it and be able to compare it to the other popular sweeteners.

Let's start out by addressing some common questions people often ask about this sugar replacement.

Allulose is a rare sugar monosaccharide that is naturally present in very small quantities in common foods like wheat, figs, corn, raisins, and maple syrup. Monosaccharides are also called simple sugars because they are the most basic form of sugar.

Allulose has the same grainy texture and sweet taste as cane sugar, but it doesn’t cause blood sugar levels to spike. There are fewer calories in it too, which makes for a great low calorie sweetener. As an example: regular granulated sugar has about 4 calories per gram but allulose has only has 0.4 calories per gram. This makes it virtually calorie free and a good choice for those looking to lose weight.

Unfortunately, it is also one of the most expensive keto sweeteners that you can buy. Most 12-ounce bags will cost $10 or more!

Is Allulose a Natural Sweetener?

Just like erythritol, allulose is a naturally occurring sugar that is found in many different types of common foods. For that reason, it is considered a natural sweetener, and should not be included in lists as an artificial sweetener.

Yes, the Food and Drug Administration (FDA) classifies allulose as GRAS (generally recognized as safe). They also ruled that it can be excluded from the counts of added sugars on nutrition labels.

Some forms of allulose are made from corn. So, if consuming anything made from GMOs is a concern for you, try to look for bags of it that are certified organic.

Where Can I Buy Allulose?

Many local stores have started to carry this alternative sweetener. As low carb or keto diets become more popular, it has become more common in local supermarkets. You can usually find Wholesome Allulose at Target and major grocery stores. Amazon is - as always - a great place to find uncommon items, and it is no different for bags of allulose.

The best thing about this low calorie sweetener is that it doesn’t affect your blood sugar or insulin levels. When you use it in place of table sugar, you will stay in ketosis and experience all the health benefits of the keto diet too.

Did you know allulose can encourage your body to burn more body fat? One study found that overweight participants saw a decrease in body fat when they used it.

The Negative Effects of Allulose

The unwanted side effects that you might experience are usually a result of consuming large quantities of this type of sweetener. These effects resemble other types of digestive tract issues which include:

The amount of allulose you can consume without experiencing most side effects is based on your body weight. A person who weighs 132 pounds should be able to comfortably consume 24 grams of allulose in a single sitting and up to 54 grams per day. For reference, 2 teaspoons of allulose weighs in at 8 grams.

If you are experiencing any of these side effects, it might be a good idea to either take a break from eating anything made with allulose, or cut back on your quantity.

Allulose is very similar to erythritol, especially when you look at how our bodies digest it. They are both primarily absorbed into the bloodstream, and they don’t raise blood glucose or insulin.

However, there are a few major differences between erythritol and allulose. The biggest one is that erythritol won’t brown like sugar, so you can’t use it to make a glaze. It’s also slightly less sweet than sugar and allulose sweeteners.

Another big difference is that erythritol has a cooling effect which creates a noticeable minty aftertaste. That’s why it is usually used in recipes with a mint taste already – like peppermint desserts.

These two are very similar in use. Stevia comes from one specific plant – the stevia rebaudiana – and it grows in Central and South America.

The biggest difference between the two is taste. Allulose sweeteners are not as sweet as sugar – but close to it. Stevia, however, is 200-350 times sweeter than sugar. That means you should use a lot less stevia than sugar.

Stevia also has anti-inflammatory and cholesterol-lowering properties that allulose does not. It’s also more affordable and easier to find at grocery stores.

I use stevia more often than I use allulose – mostly because I can use less of it, and it is easier to find.

How To Use Allulose

It comes in both liquid and granulated varieties and caramelizes really well. So use it in recipes that call for that functionality. In fact, lots of people like to use it to make a sugar-free caramel sauce.

Many people like to combine it with other sweeteners to get the sweetness and the chemical properties of the other sweeteners. Allulose makes things extra moist, so keep that in mind – don’t use it on things that might become too soggy.

Even though it is one of the most expensive you can buy, allulose sweeteners are a fantastic choice on the keto diet. With a wonderful taste and no extra carbs or sugars, keep it on your list to try out in your next baking recipe.

Recipes That Use Allulose Sweetener

The best recipes that use allulose sugar-free sweeteners are low-carb desserts. Here are some of my favorite recipes: