A delicious keto pecan pie is possible if you use the right sweetener. So good, you’ll want to enjoy this holiday sugar free pie throughout the year.

With low carb pie recipes, you can enjoy your favorite holiday desserts again. Just replace the sugar with low carb alternatives and use a coconut flour pie crust or an almond flour pie crust. You can even make the pie crustless to reduce carbs further!

Prior to going low carb, I had a great caramel pecan pie recipe that I used to make for the holidays. I got the recipe off a bag of chopped pecans and it was the easiest and most delicious pecan pie ever.

Unfortunately, I lost that recipe several years ago and haven’t been able to find the exact recipe on the internet. I’ve found a few similar recipes so I experimented with them and came up with my own.

The original recipe I had used brown sugar and butter to make a caramelized filling which is difficult to mimic in a sugar free recipe. The closest thing I’ve found to brown sugar is Sukrin Gold which is a sweetener from Europe that’s now available in the United States at a reasonable price from SukrinUSA.

If you’d like to try Sukrin, you can place an order at SukrinUSA.com. They also have a fiber syrup that you can use for your high carb recipes calling for corn syrup. There’s also a newer product called Honest Syrup made by ChocZero.

For this pie, I used my very best pie crust. I developed this pie crust when I made my key lime pie recipe. Even those not following a low carb gluten free diet absolutely love this crust.

The crust often cracks some when transferring it into the pie dish. You can either patch it up after, or just roll it out directly in the pie dish.

I have a pastry roller similar to this one. You can use the small roller end directly in your pie dish! Rolling out the dough directly in the pie dish is the easiest way to form your crust.

I add sweetener to the crust, but you can leave it out if you prefer a savory pie crust. In fact, this is a wonderful crust to use for savory dishes like broccoli cheddar quiche when made without the added sweetener.

For this low carb pecan pie, I lightened up tremendously on the sweetener. Traditional pecan pie is way too sweet and after being on a low carb diet for a while, you will gradually dislike overly sweet desserts.

In the original low carb pecan pie filling, I used a granular low carb brown sweetener. However, the filling was not that gooey after the pie had cooled. This is because the erythritol in the sweetener tends to crystallize in the recipe. That’s why I recommend using a gold fiber sweetener instead.

The rare sugar sweetener allulose is another option. It’s a popular sweetener to use in sugar free ice cream recipes so the ice cream doesn’t freeze too hard. Since allulose performs more like sugar and has been shown to have no impact on blood sugar, it’s a good choice for a keto pecan pie too.

However, if using an allulose sweetener, it’s best to combine it with either Sukrin fiber syrup gold or the ChocZero’s Caramel Sugar-Free Syrup so you get the brown sugar taste without adding molasses.

How to Make a Sugar Free Pecan Pie

The crust used in this low carb pie is light and flaky. It’s made by adding almond flour, eggs, sweetener, and salt to melted butter to form a dough.

The dough is then formed into a ball and rolled out between two sheets of wax paper. It’s then carefully transferred into the pie pan and smoothed out with your fingers or a small pastry roller.

I like to flute the edges of the crust with my fingers. Then, I typically flatten each flute with the tines of a fork. But the edges can be left flat and straight if desired. You’ll just want to cut off any excess dough.

Once the crust is formed, it’s time to make the pie filling. My recipe uses chopped pecans instead of the traditional whole pecans. I prefer it this way and find it’s easier to slice and eat.

The filling is just a blend of eggs, low carb sweeteners, butter, vanilla extract, salt, and chopped pecans. If you prefer using whole pecans in your pie, feel free to add the whole nuts.

Once the filling ingredients are blended together, the mixture is just poured into the prepared pie crust. Then the pie is baked at 325°F for 35-40 minutes. It’s best to take the pie out when the center is still a little jiggly.

My crust browned up a bit more than I would have liked. Next time, I’ll wrap the edges with foil or use my pie crust shield during baking.

You also want to make sure you don’t overcook the filling. A toothpick inserted in the center of the pie should come out clean when it’s done. However, the filling shouldn’t be completely set in the middle. There should still be a little jiggle.

If using a erythritol based granular sweetener, the filling may crystallize as it cools. Therefore, it’s best to serve the pie the same day and not place it in the refrigerator. Using an allulose sweetener and or fiber syrup will prevent this from happening.

We hope you enjoy this pie and it becomes a new tradition for your Thanksgiving dinner. And if you do give it a try, we’d love to know what you think in the comment section below. 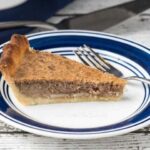 The allulose sweetener can be replaced with a regular granular low carb sweetener. However, cooling may cause the erythritol in the filling to crystallize. If using a erythritol based sweetener, it’s best to serve the same day and not put the pie in the refrigerator. If not using a low carb brown sweetener with erythritol instead of the fiber syrup, a couple tablespoons of glycerin can be added to improve the filling texture. Whole pecans can be added in place of the chopped pecans for a more traditional pie. A pie shield is recommended to prevent burning the low carb pie crust.

© LowCarbYum.com
Unauthorized use of this material without written permission from Lisa MarcAurele is strictly prohibited unless for personal offline purposes.
Single photos may be used, provided that full credit is given to LowCarbYum.com along with a link back to the original content.
First Published: November 13, 2015…
Last Updated: October 23, 2019