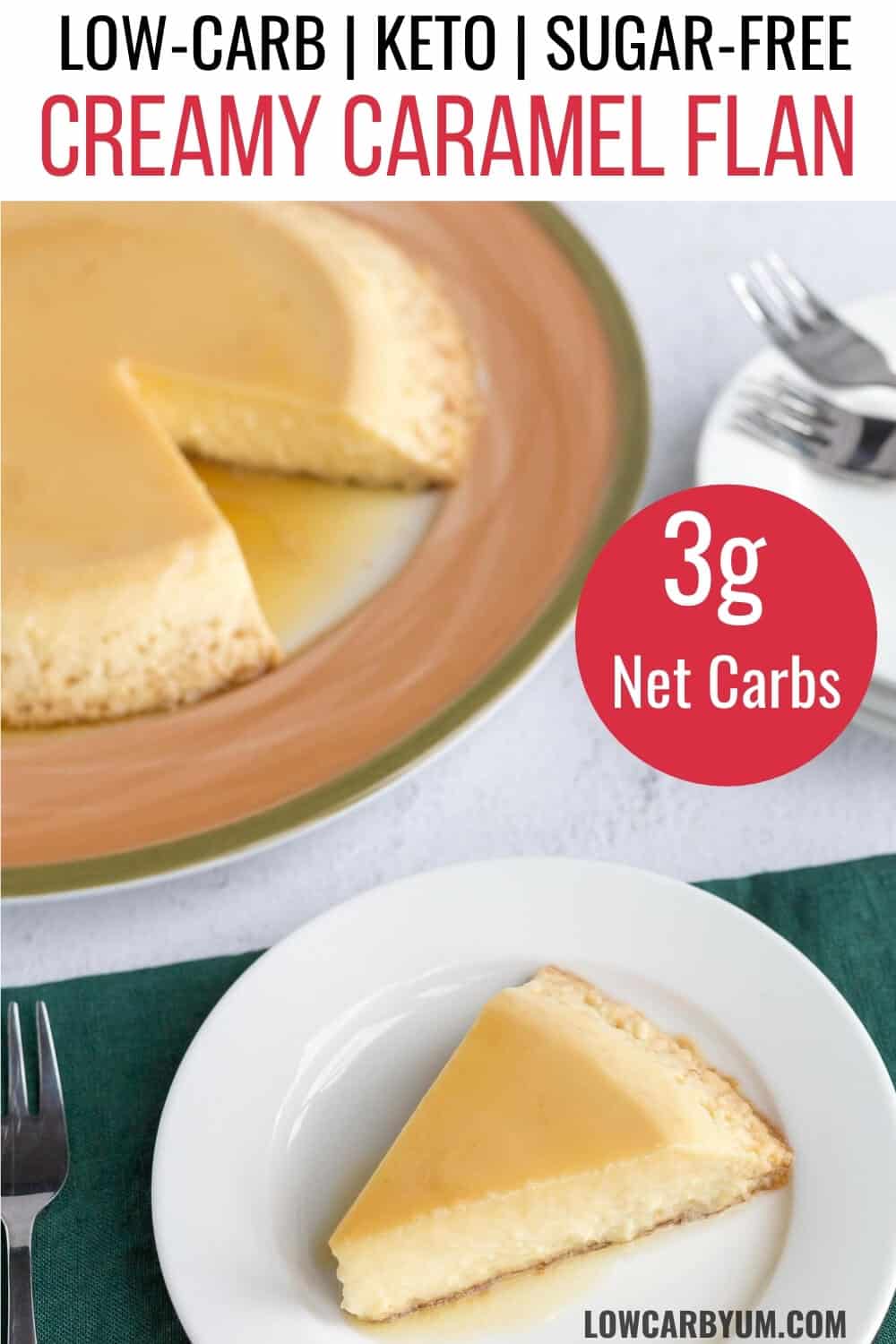 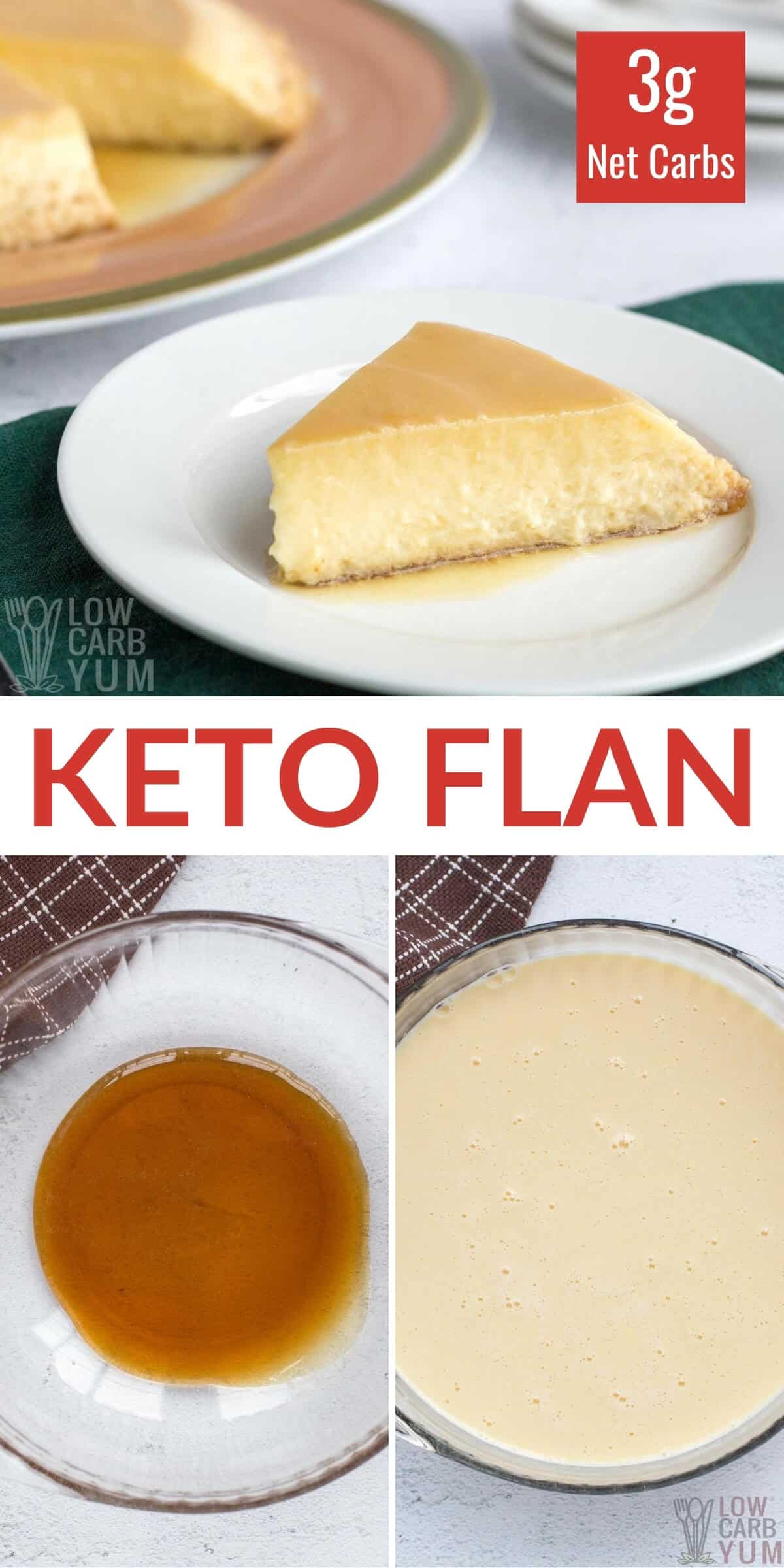 Flan is one of my favorite desserts. The rich custard base with a sweet caramel syrup on top is such an indulgence.

So when I’m really in the mood for something decadent, I love making this low-carb flan! The taste and texture are very similar to traditional caramel custard. Many people can’t even tell the difference.

But unlike traditional egg pudding, each slice only has 0.5 net carbs! Which means that you can dive into this rich dessert totally guilt free.

The trick to making flan keto friendly is swapping out the sugar for a low carb sweetener and using heavy cream instead of condensed and evaporated milk. The rest of the ingredients for an egg custard are totally low-carb!

How to Make Keto Flan

To make the recipe, you’ll prep the sauce and custard on the stove, combine and bake in the oven, then allow to cool. It’s a very simple process that just involves some heating and mixing!

Bake the Keto Flan and Cool

Your delicious sugar-free flan is ready to enjoy! Any leftovers should be stored in the refrigerator.

There are many keto sweeteners to choose from when baking. The most popular ones contain erythritol, a keto-friendly sugar alcohol with zero impacting carbs.

When making the caramel syrup, I don't recommend using any sweetener with erythritol. That's because it tends to crystallize after melting and cooling. You'll get much better results using the kabocha extract sweetener BochaSweet.

You can also use an allulose sweetener blend for the syrup. But I've had the best results with kabocha extract. A erythritol sweetener blend is fine to use for the custard because it gets mixed in with other ingredients.

When making keto flan, there's no need for a special mold pan. I usually just use a Pyrex pie plate or 2-quart baking dish. However, you need to be careful when running a knife along the sides as bit of custard may flake off.

Using a pan where the sides release or the bottom pushes makes it easier to release the custard. So you may want to use a springform pan or removable bottom tart pan instead.

You can also use 6 to 8 ramekins instead of a large pan to divide the custard into individual serving sizes. Baking time will be reduced to about 30 to 40 minutes for ramekins.

Looking for more low-carb treats to satisfy your sweet tooth without kicking you out of ketosis? Check out a few of these favorites:

This sugar-free flan with caramel sauce is so delicious, you’d never even guess that it’s low-carb!

If you like egg custard dishes, you should also try my keto creme brûlée custard. The main difference is that flan has a caramel sauce on top while creme brulee has a hard caramelized top layer.

You could also try my dairy-free coconut custard or keto lemon pudding for even more tasty flavor options.

There are so many great ways to enjoy egg custards on a ketogenic eating plan. Which one is your favorite? 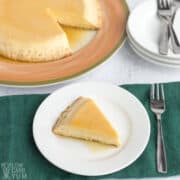 When making the caramelized sugar topping, it's recommended to use a non-erythritol based sweetener. Otherwise, the top can crystallize after cooling. I recommend using BochaSweet or an allulose based sweetener blend that's a 1 for 1 sugar replacement.