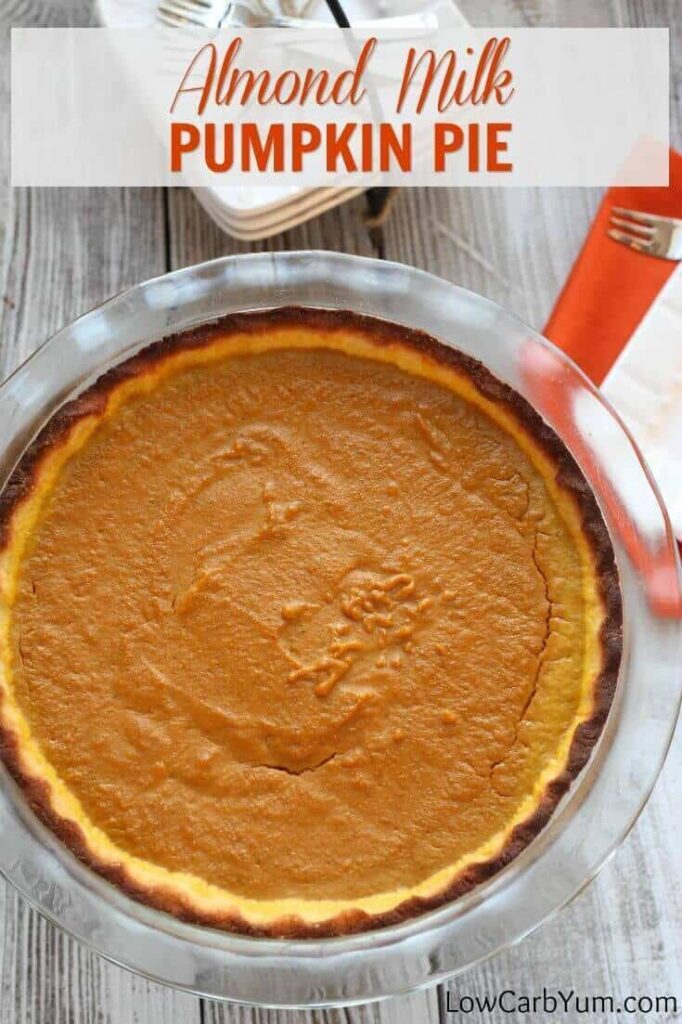 A low carb and gluten free almond milk pumpkin pie recipe that doesn’t rely on evaporated milk. Use this pie crust recipe or your own. Perfect for holidays!

It may be a little early to start planning a Thanksgiving menu, but I’ve already got my thoughts running for yummy low carb desserts. You may want to save this gluten free low carb almond milk pumpkin pie recipe for a traditional holiday dessert.

I have been searching for a way to substitute almond milk instead of evaporated milk in my regular recipe. Trying to evaporate the milk down seems to be too much of a hassle with a good chance of not producing the desired results.

Using a one for one replacement of almond milk to evaporated milk would result in a filling that is too runny. To get around this, I simply used less almond milk.

You don’t have to use the vanilla whey protein powder called for in the crust. Instead, the same amount of extra almond flour along with a little vanilla extract can be used. Or, you can just use your own low carb crust recipe.

Sometimes, I like to use my standard low carb pie crust that’s listed on my key lime pie recipe. Other times, I just leave the crust out entirely as it does add additional carbs.

Don’t feel like making a low carb pie crust? Simply leave the crust out! Eliminating the crust lowers the carb count in this almond milk pumpkin pie recipe too.

I was very pleased with how this pie turned out. It had a thick custard like filling and a crunchy crust. And the spice blend was perfect.

If you think the filling is too soft, an egg or thickener like xanthan gum could be added. Or, you could boil down some of the water out of the almond milk.

In the future, I’ll experiment with using heavy cream instead of almond milk. That may also help firm up the filling since cream isn’t as watery.

I also think that using just the egg yolks will give the filling a more custard like texture. These are all ideas I’d like to try in a future low carb pumpkin pie recipe.

For now, I’ll enjoy this pumpkin pie with almond milk recipe. It’s pretty easy to make and gives the traditional flavor without all the carbs.

The pie was shared with some friends and they all loved the taste. I’d just like to work on firming up the filling a bit more.

I hope you enjoy this delicious low carb almond milk pumpkin pie. It’s sure to be a traditional Thanksgiving pie in our home.

If you’d like some more ideas for low carb holiday pies, I’ve put together a terrific collection of keto dessert pies. So, enjoy the holidays and have your pie too! 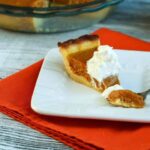 For a firmer pie, use 3 egg yolks plus 1 whole egg in place of the 3 whole eggs. You may want to use another low carb pie crust for this recipe. * ⅓ cup additional almond flour plus ¼ teaspoon vanilla extract can be used instead of the vanilla whey protein in the crust mixture Makes 8 servings Net carbs per serving: 6g