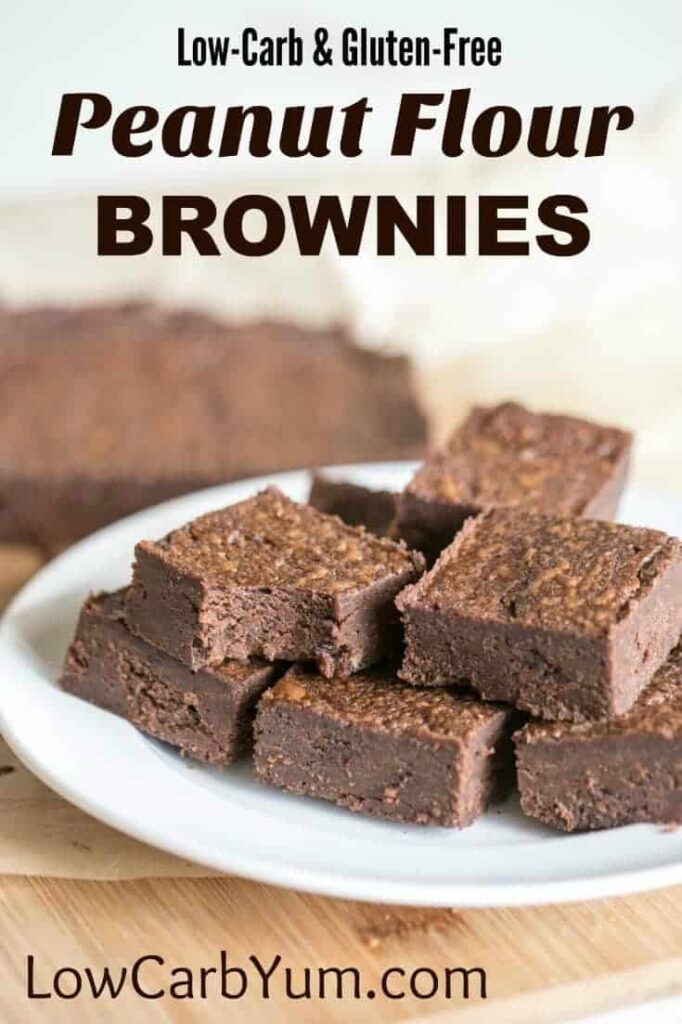 Gluten free chocolate brownies made with peanut flour. These low-carb peanut flour brownies make nice portable snacks that you can bring with you anywhere.

I wanted to make a batch of brownies. This time, I thought I’d make them with peanut flour since I had a lot in the pantry to use up.

It has been a while since I’ve baked anything with peanut flour. One of the best recipes from previous posts using this low carb flour was a chocolate cake. It was moist and had only a hint of peanut taste.

These chocolate peanut flour brownies weren’t quite as good as the chocolate cake, it made some nice portable snacks for me to bring to work. Frosting these brownies like my frosted zucchini brownies would have made them taste just as good as the cake. But, I didn’t want to add the extra calories to them.

For these brownies, I split up the sweetener. I also added in some VitaFiber powder which gives them a softer fudge-like texture. You can use your own preferred sweetener(s) instead. The recipe needs anywhere from 1 to 1 ½ cups of sugar equivalent sweetener. Feel free to adjust to suit your own taste.

There’s a lot of butter in these brownies. This provides plenty of fat for a low carb diet. Don’t make the same mistake that I did in the beginning thinking that healthy fats need to be very limited.

Be sure to use a high quality cocoa powder in these chocolate peanut flour brownies. I used NuNaturals Dutch Processed Cocoa. Another good cocoa powder is the one made by Ghiradelli. Hershey’s cocoa is very popular and it’s what I grew up on, so I usually have that brand too.

Peanut flour is pretty much a one for one replacement for regular flour. Therefore, you can use it to reduce carbs in your regular recipes easily. If you don’t care for peanut flour, you could also replace it with your favorite low carb flour mix instead.

I thought these peanut flour brownies had a nice touch of peanut flavor without being too overpowering. One day, I need to come up with low carb peanut butter swirl chocolate brownies.

There are so many low carb brownie recipes out there, it’s tough to choose. If you want a moist brownie, look for one made with zucchini. For a soft and chewy texture, you’ll want to add polydextrose, a fiber sweetener, or some blackstrap molasses.

In the past, I used to add polydextrose, but it gives me very bad gas cramps so I avoid it now. Fiber sweeteners don’t bother me as much, but I limit the amount I use as the fiber carbs add up quickly.

If you’d rather use a low carb brownie mix, the best one I’ve found is Good Dee’s Brownie Mix. It uses VitaFiber powder in the mix to give it the texture of real sugar brownies. And, it provides instructions for either cake-like or fudge-like brownies.

I don’t think it would be very difficult to come up with your own low carb brownie mix. It’s another item on my “to do” list! 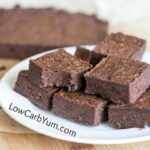